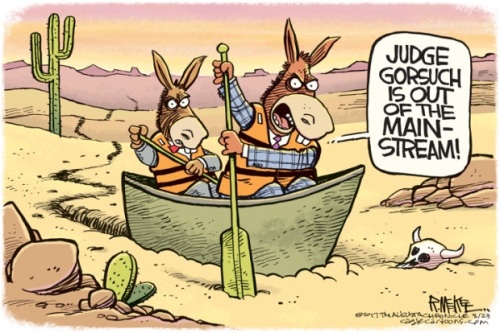 History was made yesterday when, for the first time since our nation became a nation, Democrats filibustered an exemplary Supreme Court Nominee because – and we’ve got plenty of political scientists and analysts to back us up on this – they’re complete and total assholes.

The only way around this epic act of douchebaggery was for Senate Republicans to invoke the so-called “nuclear option,” which – disappointingly – did not require inviting Democrats to “a picnic and special surprise” in the remotest corner of Nevada while a gleeful Donald Trump punched their coordinates into his suitcase nuclear launch device.

Rather, it involved changing Senate rules to allow a Supreme Court nominee to be confirmed with a simple majority of 51 votes, rather than requiring the 60 votes which has traditionally been the standard. And under this rule, we should see standout nominee Judge Gorsuch confirmed for the Supreme Court sometime today.

We would say that the Democrats are losing their freaking minds over this, only that ship sailed a long time ago.

One response to “Enjoying a Little Nukie”