Happy birthday to a great American 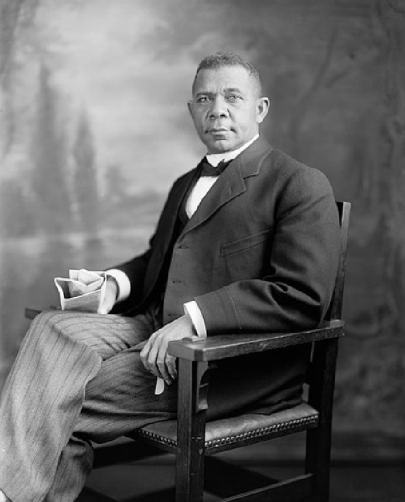 Booker T. Washington was born on April 5, 1856, the illegitimate son of a black slave and a white plantation owner. Following emancipation, he worked his way through school, eventually becoming a teacher. In 1881, at the age of 25, he helped to found the Tuskegee Institute in Alabama, a college for training black teachers.

Washington devoted his life to improving the lives of black Americans through education and vocational training, with a strong emphasis on teaching the life skills they would need to gain social acceptance, overcome white racism, and lead productive lives. He was often criticized by other black civil rights leaders of his time who found his style too understated and insufficiently confrontational. Washington’s formula for success for black Americans — education, thrift, and hard work — is what many black kids nowadays dismiss as “acting white.”

“Success is to be measured not so much by the position that one has reached in life as by the obstacles which he has overcome.”

“No greater injury can be done to any youth than to let him feel that because he belongs to this or that race he will be advanced in life regardless of his own merits or efforts.”

“There’s a class of colored people who make a business of keeping the troubles, the wrongs and the hardships of the Negro race before the public. … Some of these people do not want the Negro to lose his grievances because they do not want to lose their jobs. There is a certain class of race-problem solvers who don’t want the patient to get well because as long as the disease holds out, they have not only an easy means of making a living, but also an easy medium through which to make themselves prominent before the public.”

Washington wrote fourteen books, including an autobiography, Up From Slavery, which was published in 1901. He was instrumental in raising the funds for and helping to establish thousands of educational institutions for blacks throughout the south. He remained head of the Tuskegee Institute until his death in 1915, at which time Tuskegee’s endowment had grown to more than $1.5 million, due largely to his efforts.

2 responses to “Happy birthday to a great American”