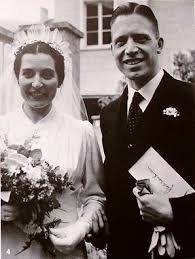 A northern Italian layman, Josef Mayr-Nusser, has been beatified by the Roman Catholic Church.  His feast day is Oct. 3.

Beatification is a step on the way to canonization.

In 1944, Mayr-Nusser, a Catholic husband and father, refused to take the oath of allegiance to Hitler after being drafted into the SS.

He believed that Nazi ideals could in no way be reconciled with Christian ethics and values.

As a result of his refusal, he was jailed, put on trial and sentenced to death for treason.

He was ordered to march to the Dachau concentration camp, where he was to be shot by firing squad.  He died of dysentery along the way.

On Sunday, Pope Francis said that Blessed Josef is a model for all laymen and fathers “on account of his great moral and spiritual stature.”

Dachau concentration camp held many religious prisoners of Nazi Germany, and became known as the “largest monastery in the world” because of the number of clerics there.

The camp housed some 2,700 clergy, roughly 95 percent of whom were Catholic priests from Poland, making it one of the largest residences for priests in the history of the Church.

Comments Off on Blessed Josef Mayr-Nusser