$95,000 to adapt Shakespeare without words.  (Somebody get Bob a glass of wine, please.)

$50,000 to help bring a play about trannies to the stage, plus hundreds of thousands more to support LGBTQ issues, including $10,000 for a play about two anti-gun lesbians.

$35,000 for “affordable housing and sustainable communities for San Francisco artists.”

$20,000 for “Piss Christ”, a photo of a small plastic crucifix submerged in the artist’s urine.

$20,000 to support a series of public art presentations about climate change.

$6,000 to finance research into the lives of pets in Victorian England.

Comments Off on Awful Art Grants

Today, after just two months under Trump’s leadership, it has DECREASED to $19.919 Trillion.

That works out to $49 Billion reduction PER MONTH.

The Trump presidency has been a success so far from a standpoint of increased optimism for the future of business. Still, the media will continue to give credit to a radical Muslim pretending to be an American. His entire tenure was mired in wasteful spending, special treatment for drag queens and fellow Muslims, and throwing hundreds of billions at climate change and hordes of illegal criminals rushing here to suck on the taxpayer teat and commit the crimes white America will not do. His crushing taxes and regulations caused a negative rate of economic growth not seen in this country before, the Great Depression included.

Obama Says “Jobs Are Just Not Coming Back” …Then Trump Adds 298,000 Jobs in First Month

Barack Obama, the worst president in modern history, was asked in June 2016 about the Carrier Corp jobs in Indiana.

STATEN ISLAND, N.Y. — At a time when many companies are decreasing staff, big box retailer Home Depot is seeking to hire 80,000 employees to fill its stores nationwide by spring.

And the national retailer is touting the shorter time — just 15 minutes — it will take to apply for a job via its website.

Applying for a job at the world’s largest home improvement retailer now takes about 15 minutes using any device, thanks to a shorter application and mobile-optimized ‘careers’ site at careers.homedepot.com,” said the company in a statement.

Technology giant Samsung Electronics Co. has announced that they are planning to increase manufacturing in the United States by opening another production plant.
If this isn’t indicative of Trump’s ability to use his business savvy to convince the leaders of large corporations and businesses to expand in America and create new jobs, I don’t know what is. His first two months have been spectacular for the economy, if absolutely nothing else. You have to respect that, I don’t care who you are.

By comparison, under President Obama, the US Debt burden increased by more than $400 billion after his inauguration through March 19th 2009, his first two months in office.

POLLS ARE POLLS. DESPITE THE OPTIMISM PEOPLE HAVE ABOUT THE ECONOMY, THE MEDIA WILL CONTINUE TO HAMMER HIM FROM EVERY QUARTER.

According to the recent one conducted by Gallup, only 40 percent of Americans approve of the job he has done in office so far while 55 percent disapprove. At this point in Barack Obama’s presidency, his approval rating was 63 percent.

IT’S NO SECRET THEY CAN MAKE POLLS SAY WHATEVER THEY WANT THEM TO SAY.

Donald Trump, Rosie the Riveter, and the Revival of American Economic Nationalism

Sometimes big ideas get small coverage. Unfortunately, that was the case with President Trump’s March 15 trip to Michigan, in which he raised an important idea—arguably the most important economic-policy idea in U.S. history—and yet his words received almost no attention.

Media No Longer Considers the President Leader of the Free World

When Donald Trump won the election, however, several media outlets published articles suggesting that the president of the United States could no longer be called the leader of the free world because of his worldview.

The latest example is a Politico article published Thursday, titled “The Leader of the Free World Meets Donald Trump,” which describes President Trump’s meeting Friday with German Chancellor Angela Merkel. The article was written by James Rubin, who served as assistant secretary of state for public affairs under former President Bill Clinton.

Rubin writes that Merkel is the “last best hope” for Western civilization, arguing the U.S. abandoned its role as a world leader to solve the Syria conflict while Germany led by taking in Syrian refugees.

However, historically the comedic-poking zeal is always higher for Republicans like Gerald Ford, George W. Bush and Sarah Palin. Jokes about Trump’s predecessor were gentler and basically ignored his malapropisms, historical ignorance and serial ObamaCare lies.

The current late-night tone seems designed more to appeal to the 50 percent of the country that convinced itself Hillary Clinton would be the 45th president. The historic Trump upset Nov. 8 made that defeat sting all the more. So divided is the country now that many Trump supporters soak up the Trump antipathy just to revel in liberals’ pained discomfort. 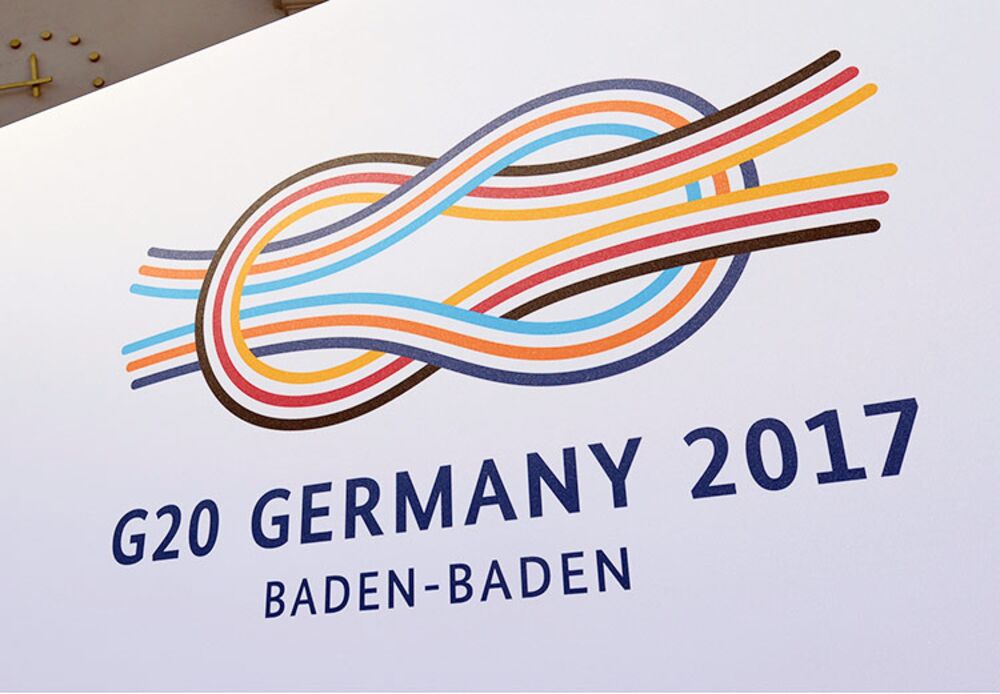 In two days of meetings in the German town of Baden-Baden, the argument by U.S. Treasury Secretary Steven Mnuchin, in his first appearance at an international forum in the role, reflects claims by President Donald Trump that his nation has had a bad deal from the current global trade setup. That attitude pitched him against most other delegates, who favored a multilateral, rules-based system as embodied in the World Trade Organization.

Sesame Workshop’s CEO rakes in well over half a million in salary and benefits.  That’s five times the average pay for CEOs at nonprofits.

And the other top ten Sesame Workshop honchos raked in an average of $382K, which is about six times the median household income in the U.S.

As for PBS, only about 15% of its budget comes from federal taxpayer-funds.  The rest comes from individuals, corporate underwriters, private grants, and state and local government support.

When the Washington Post looked into PBS’ financing a few years ago, it concluded:

“If Congress took this funding away, PBS would likely survive, though perhaps diminished.”

Diminished?  WHO CARES?!  Certainly not any of us on the right-wing whose political views are routinely sneered at on this so-called “public” station.

Comments Off on Big Bird doesn’t need hand-outs from taxpayers!

The Women’s March tweeted: “How will you #ReflectAndResist this weekend? Let us know!”

Comments Off on I am amused

Yesterday, I realized I have so much energy all of a sudden that the amount of caffeine I was using (4 cups of tea, 2 black, 2 green) was making really hyper.

I reread the article (linked below) and noted that Cordyceps sinensis “increases ATP (adenosine triphosphate) levels in the body by almost 28 per cent. ATP is the body’s energy supply source—the body’s battery, so to speak—and is required for all enzyme processes.”

I’ve been taking one to two capsules a day for about six weeks now; the bottle says the dose should be 3, but I didn’t want to overwhelm my body.  Next month, I plan to try using 3 per day and see how that goes.

Anyway, a number of the studies mentioned noticeable improvement after 30 days, so maybe that’s why I suddenly seem to have so much more energy and really don’t need caffeine just to stay upright!  This is so cool!

Clinical research in controlled studies had elderly patients suffering from fatigue and senility-related symptoms report relief in these areas after using Cordyceps for 30 days. Their fatigue was reduced by 92 per cent, their feeling of cold by 89 per cent and their dizziness by 83 per cent. Patients with respiratory/breathing problems felt physically stronger and some individuals were able to jog up to 600 feet.

Cordyceps sinensis is considered a “food” by the US Food and Drug Administration (FDA) and is classified as “generally recognized as safe” (GRAS).  I get mine from Nature’s Sunshine; it’s also sold at my local health food store.

Keep in mind as you scan down this amazing list that these claims are not anecdotal, but based on scientific clinical trials.

The Left Eats Its Own

Two days ago, I featured a story about the hostility brewing between Trannies and Gays.  Today, I have one about a female Canadian politician who bills herself as “a democratic socialist and intersectional feminist.”  So yeah … a Leftie fershure.

It seems she sparked a minor Left-on-Left shame storm with this tweet:

The Vancouver chapter of Black Lives Matter tweeted at the politician saying that “Appropriating Black culture is not intersectional feminism. Please delete your “to the left” FB post & address the issue.”

She complied, which got her criticized by many other Lefties, who thought that BLM was being ridiculous and that she should have more backbone.

The politician declined to address how the lyrics of a song that is popular across racial lines qualifies as “black culture.” She said only:

“Showing respect is what building a movement is all about. I will not tolerate racism or hate speech directed at #BLM or any community.”

It must be exhausting to be a Leftist, what with having to constantly protest angrily on behalf of utter nonsense, while simultaneously keeping current on the often-changing pecking order of all the different minority groups.