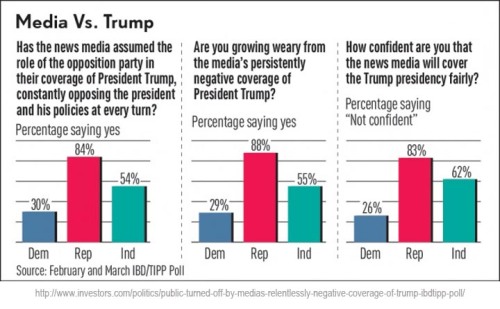 The mainstream media’s open hostility to President Trump may be starting to backfire, according to the latest IBD/TIPP poll.

The poll, conducted from Feb. 24 through March 4, included 909 responses who were surveyed using live interviewers on cellphone and landlines. It has a margin of error of +/‐ 3.3 percentage points.

54% said the news media “has assumed the role of the opposition party, constantly opposing the president and his policies at every turn.”

Not surprisingly, Republicans overwhelmingly hold these views. More important is that a majority of Independents, plus 3 out of 10 Democrats do as well.

Comments Off on Enough is enough already!