Kellyanne and the Couch

Let us reflect on the fact that those on the Left now need to manufacture a Trump-related crisis every day, and the current one is a doozy: Kellyanne Conway put her knees on an oval office sofa, thereby leaving the Left shocked (shocked!) with her lack of respect for the office.

Mind you, these are the same idiots who didn’t complain a bit when Monica Lewinsky’s knees hit the carpet, and Bill Clinton’s “precious bodily fluids” were shooting around that same oval office like a Red Bull-fueled paintball war. Even now, there’s probably more of Bill’s DNA in that room than there is in Chelsea.

Of course, while focusing on Kellyanne’s knees, the mainstream media ignored what was actually happening in that photo: Donald Trump was meeting with the nation’s black college presidents – which you’d think the Left would approve of if they actually gave a tinker’s damn about either black people or education (spoiler alert: they don’t). 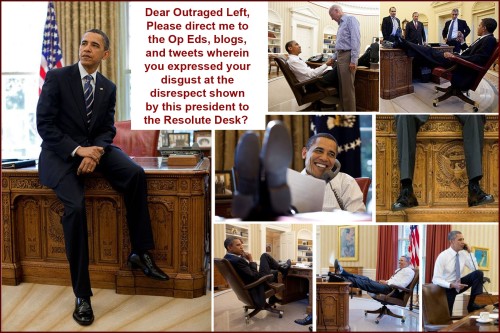 And when you have to admit you can’t, because you didn’t care, could you please recall that, when we objected to Obama disrespecting the Resolute Desk, you published pictures of previous presidents with their feet on it?  Then, would you give a short thought to the fact that a couch is just a couch, not a historic national treasure?  Then, could you please shut up?  Thank you.

5 responses to “Kellyanne and the Couch”