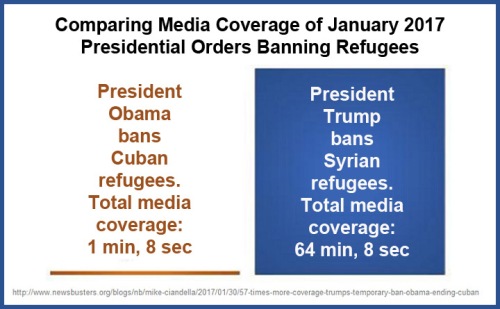 Elaine Chao and the Progressive Playbook

Asian Female Elaine Chao was confirmed as President Trump’s new Secretary of Transportation by the Senate with a vote of 93-6. 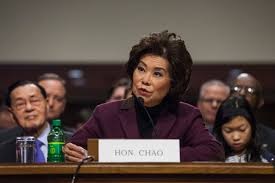 Busting out the Progressive Playbook, we can now confirm that all six of them are RACIST MISOGYNISTS.

John Nolte offers Democrats 9 hints for learning how to talk to “real people.”

Obviously, I don’t expect Democrats to do any of this stuff, because they seem to be incapable of learning.  But that is fine with me, since it likely means four more years for Trump!

Meanwhile … this is really good.  Wise and funny, my favorite combination.

Democrats want to better relate to the “real people” who helped elect President Trump, here is the best advice I can offer…

1. Step Away From the Pussy-Hats

This isn’t even a joke. What were you morons thinking running around all weekend on national television with your heads sticking out of cardboard vaginas? Listen, I’m the most live-and-let-live guy you’re ever gunna meet. As long as it doesn’t violate my rights or happen on my porch, how consenting adults live their lives is the least of my concerns.

But for the Party of Harry Truman to allow itself to be defined by humorless harpies wrapped in papier-mâché  lady parts… Donald Trump thanks you, and I don’t want to talk to you, because you’re creeping me out.

Parents who would rather not have a man in a skirt pee next to their young daughter are not Nazis.

You always talk to us as though we need correcting. It is not only insulting, it is authoritarian and sinister.

Until you stop hating us, our shields are going to be up. That is no way to have an honest conversation.

Correcting someone’s speech is bossy, except I’m not allowed to tell you that because “bossy” has been disallowed by your Speech Police.

And they sure as hell aren’t going to listen to you.

4. No One Wants to Talk to Elizabeth Warren

In fact, I think her Indian name is “Shrieks with a Pussyhat.”

Democrats have the hectoring old biddy vote in the bag. The face of your Party should be a Senator Joe Manchin. He represents the kind of people you want to attract.

5. You Are Not Superior

My least favorite people in the world are those who “escape” small town America and then look back on it with contempt, from their Manhattan Ivory Tower.

After years of working with my hands, in the outdoor heat and bitter cold, breaking my back… I figured out that this was not how I wanted to live my life. So I got out.

Here’s the thing… What separates me from the modern-day Democrat is that I have nothing but admiration for the working class. I don’t look back at those years or the people I worked with through a lens of contempt.

Write this cold truth down…

If artists and writers and journalists and pundits and actors and activists and teachers and comedians and late night television hosts, all disappear tomorrow, we would miss them but the world would keep right on turning.

Try to live one week without auto mechanics, plumbers, janitors, truck drivers, farmers, fishermen, garbage men, bus drivers, the guy who plows the snow, the men who melt steel and stock the shelves and tow your car.

These are the men and women who get up every morning to break their backs to keep our civilization intact.  Compared to them, nothing you or I do matters. It is not even close.

You might not like the fact that they smoke Winstons, eat cheeseburgers, tell inappropriate jokes, own firearms, and prefer NASCAR over “Scandal,” but damn your soft hands to hell for not respecting and admiring them.

The modern-day Democrat Party is now the Party of shouting others down.

You are too busy signaling your own virtue to hear what I have to say.

Here in my small North Carolina town, many of my neighbors have visited the big cities, and through the Internet, television and movies, we have all spent real time in your world. FACT: We know a whole lot more about your culture than you do ours.

We have been to your museums. When have you been to our NASCAR race?

We have visited and toured, and, even for a time, lived in your cities. Outside of a campaign stop, when have you spent real time in our town?

We have watched and enjoyed your foo-foo movies and television shows. When have you given our faith a real chance?

We have read your websites and watched your news channels. When have you engaged in a single activity that helps you relate to us?  We know all about you. Now learn about us. Come. Join us. Not as a superior social scientist studying a specimen, but as a fellow human being.

Take a two-month leave. Rent a room in a small town. Get a temporary job at the Walmart. Eat at Bojangles. Try the Big Gulp. Buy a raffle ticket at the Church picnic. Put down the iPhone and sit on a porch.

Hate to pop your bubble, but YOU are the parochial, narrow-minded ones, not us.

8. Say What You Mean

“My househelper, a visually-impaired, Native American little person of color, who is a bit cerebrally-challenged but still an exceptional LGBTQQIP2SAA of differing sobriety, is now engaged in domestic incarceration.”

Just say that your retarded, blind-drunk, gay, Indian-midget of a maid got married.

9. Stop Taking Classes On How to Talk to ‘Real People’

In order to talk to real people, you have to be a real person.

Comments Off on Tips for Democrats

There’s a new boss in town

And the Obama Sheeple know it.  According to Hot Air,  EPA employees were so upset after Trump won that they had to take sick leave.  And a few days ago, an unnamed employee reported more than a few friends were still coming to work in tears. 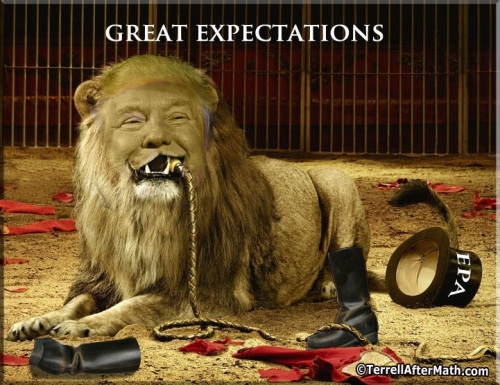 But for those who are more committed to science than to politics, things are looking up.  In December, the House Science, Space and Technology Committee issued a report on their investigation into the firing of an Energy Department scientist.

The committee determined there to be an institutional disregard for separation of powers that amounted to “a reckless and calculated attack on the legislative process itself, which undermines the power of Congress to legislate.”

“Institutional disregard” is a polite way of saying that the Obama administration was so determined to have its own way that it actually forbade Energy Dept scientists from giving Congress information about their work and fired one who gave Congress information requested.

Rep. Lamar Smith, R-Texas, chairman of the committee, said, “In this staff report based on lengthy record before the committee, much has been revealed about how senior level agency officials under the Obama administration retaliated against a scientist who did not follow the party line.”

“Moving forward, the department needs to overhaul its management practices to ensure that Congress is provided the information it requires to legislate and that federal employees and scientists who provide that information do so without fear of retribution.”

Comments Off on There’s a new boss in town 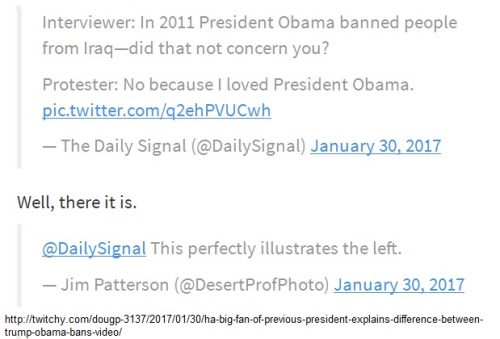 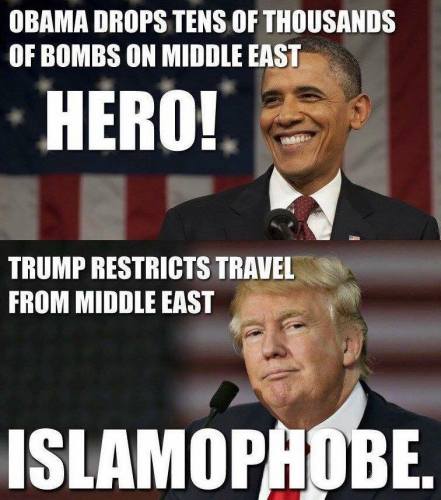 Schumer in 2015 – “Halt in refugee program may be necessary.”
Schumer Now – “This order was mean spirited.” 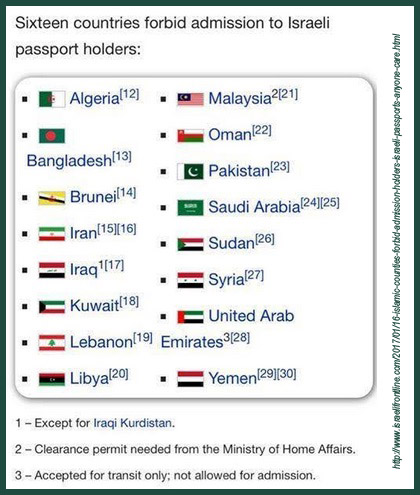 Arkansas says NO to tearing babies limb from limb

Jan 26, 2017:  Arkansas Gov. Asa Hutchinson signed into law the Arkansas Unborn Child Protection From Dismemberment Abortion Act, less than a day after the state Senate passed it with strong support.

Democrats who loudly decried the use of waterboarding on terrorist detainees who had information of planned attacks are A-OK with tearing unborn babies limb from limb. 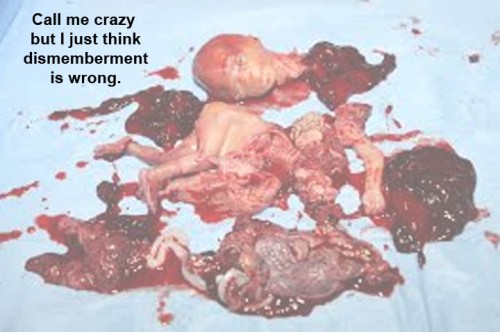 Good luck with that, Starbucks 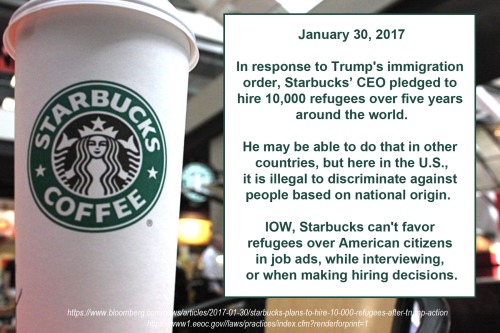 Comments Off on Good luck with that, Starbucks