EWTN guessed the crowd size at about half a million.  It should be noted that while the Women’s March was a first and maybe one time only event, this year’s March for Life was the 44th.  People even showed up last year when a blizzard dumped 2 feet of snow on D.C.

Comments Off on Media Bias and Crowd Sizes – Updated

Giving the lie to the Left’s claim that they are the environmentally responsible ones, while we supposedly just want to ruin the planet.

Comments Off on March Trash

Who is and always has been truly pro-life?

The Republican Party, that’s who.  In the 19th c., Democrats sided with slavers. In the 20th c., they opposed civil rights legislation.  It was only after LBJ saw the writing on the wall that he jumped his party on board the Black Train and, as he so colorfully put it, got “niggers votin’ Democrat.”

Since then, Democrats have owned the governments of cities like Chicago and Detroit, which they managed to turn into hell holes for blacks.  And they have promoted abortion and funded Planned Parenthood, which targets minority communities, for what has amounted to a genocidal attack on poor people of color.

Former president Obama used to mark the March for Life with a White House proclamation praising Roe v. Wade.  If a state cut funds to Planned Parenthood, he’d send federal funds, despite the undeniable fact that the founder of Planned Parenthood was a flaming racist.

But the times they are a’changing.  As in the days of our first Republican president, Abraham Lincoln, we again have an abolitionist in the White House!

I read where Whoopi Goldberg said anti-abortion activists should stop using the name “pro-life” because supposedly “everyone is for life.” I don’t agree with her on any of that, including the last part. I know there are people who profit off of and even revel in death.

But what amused me greatly was that Goldberg felt compelled to try to co-opt the name for her side. Clearly, we are making HUGE progress with the public. Otherwise, she’d never do that, right?!

Comments Off on Who is and always has been truly pro-life? 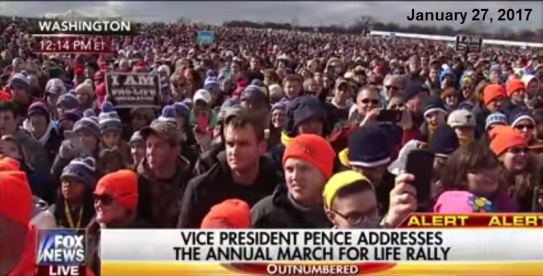 VP Pence: “I’m humbled to be the first Vice President to have the privilege to attend the March for Life. I am deeply humbled to stand with you today. …  I’m pro-life and I don’t apologize for it.”

Vice President Mike Pence Speaks at the 2017 March for Life

That Was the Week That Was

Putting this post together I was thinking about what a week it’s been and I remembered a TV show from 1963-64 called that That Was The Week That Was.  It was a comedy show seasoned with political satire.  Here’s a sort clip:

In this first incredible week of the Trump presidency he’s made it clear who’s in charge. The unborn have a protector; the terrorists of the world have a sworn enemy; Israel has a friend who won’t betray them; and persecuted Christians have hope of escaping Islamic genocide.

As far as our relationship with Mexico goes, everybody it seems is worried about his proposed 20% tax on Mexican imports. He’s always been an advocate of tariffs, which can mean higher prices on things like avocados and beer.

Keep in mind Trump is a world class negotiator. He’s not going to tip his hand and announce what he plans to do. He knows Mexico has far more to lose than we do. I think they’ll hammer out something palatable to both sides. Nieto must realize some of the criminals and the welfare cases they sent here will be coming home for them to support.

At some point the liberals will realize they won’t get away with the shameful way they report the news. It doesn’t work anymore thanks to social media. They’ll never stop trying, though because they’re a dedicated lot. 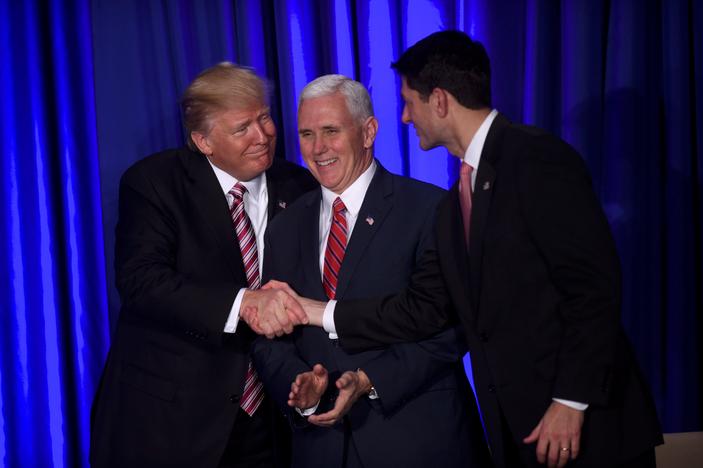 “This Congress is going to be the busiest Congress we’ve had in decades, maybe ever,” Trump said in a speech to the lawmakers at a Philadelphia hotel.

“Enough ‘all talk, no action.’ We have to deliver,” Trump added.

NBC’s Chuck Todd: Media knew how ‘hated’ Hillary was in heartland and we ‘underplayed’ it

THE DEMOCRATS UP FOR RE-ELECTION IN 2018 WERE AT A RETREAT THIS WEEK, LEARNING HOW TO CON THE IGNORANT HICKS WHO VOTED TRUMP INTO OFFICE. SOME OF THE LESSONS WERE ON HOW TO PRETEND YOU’RE REALLY INTERESTED IN WHAT THESE COUNTRY-ASS HILLBILLIES HAVE TO SAY, PUTTING UP WITH ICEBERG LETTUCE IN YOUR SALAD INSTEAD OF ARUGULA, TAKING A SELFIE ON A TRACTOR, AND PRETENDING YOU’RE AGAINST GOVERNMENT INTRUSION INTO EVERY ASPECT OF THEIR LIVES.

“We didn’t tell the stories of all Americans,” the Meet the Press host admitted Thursday to former Bush White House press secretary Ari Fleischer in a interview for the “1947” podcast.

“Where I think political correctness got in the way of what we all knew as reporters and didn’t fully deliver was how hated the Clintons were in the heartland.”

“And I think it was a fear of, ‘Oh, is it going to look like it’s sexist, anti-woman if we say that?’” he added, pointing out that on the hustings he saw numerous “Hillary for Prison” signs adorning the front yards of rural America.

Schumer: ‘Tears are running down the cheeks of the Statue of Liberty’

“Tears are running down the cheeks of the Statue of Liberty tonight as a grand tradition of America, welcoming immigrants, that has existed since America was founded has been stomped upon,” Schumer, a Democrat from New York, said in a statement. “Taking in immigrants and refugees is not only humanitarian but has also boosted our economy and created jobs decade after decade. This is one of the most backward and nasty executive orders that the president has issued.” 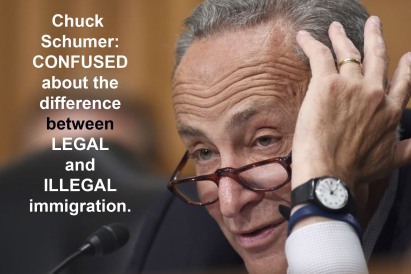 “Forty-one years ago that couple from Haiti could have made the choice to abort, but they didn’t,” Love said. “They chose life. I’m certain that this couple would never have thought that that child would become the first black female Republican ever to be elected to Congress.”

I HESITATED TO POST THIS. THIS GUY IS A PATHETIC EXCUSE FOR A SUBHUMAN MONGREL.

The play, titled, “Barron Trump Up Past Bedtime”, stars comedian Shannon Noll as Barron and is set for the Revival Theater in Hyde Park, the neighborhood of Trump’s predecessor former President Barack Obama. Melania Trump will also be targeted in character on stage. But the main target, of course, is President Trump.

[CtH: From the article linked below: “I specifically created this character so that he bears no resemblance in personality to what we’ve seen of Barron Trump. I’m just playing him as a generic kid.”  Uhhhhhhhhhhhhh … the lead looks like Barron Trump and the character is named Barron Trump, but he’s “a generic kid”?  Riiiiiiiiiiiight.  What. A. Load. Of. Crap.  They would NEVER have done this about the Obama girls. Not. Ever.]

THIS IS WHAT PASSES FOR COMEDY IN THE SOCIALIST WORLD. AND THEY WONDER HOW THEY LOST.

Noll said that Barron Trump “is absolutely not the butt of a joke.”

“It’s a variety show in the style of ‘Pee-wee’s Playhouse’ and it’s basically Barron Trump getting read a bedtime story, and then deciding to stay up past his bedtime and play with his imaginary friends,” Noll said Friday.

THERE’S ANOTHER POST AT GATEWAY THAT INCLUDE SOME REALLY VILE TWEETS ABOUT THE LITTLE BOY. I WOULDN’T BOTHER TO LOOK.

BE SURE TO CHECK THE REPLY SECTION FOR MORE.

NOW, WHAT YOU’VE ALL BEEN WAITING FOR 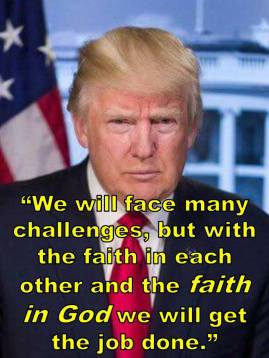 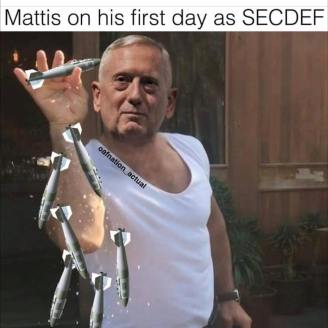 THIS IS WHAT I’VE BEEN TOLD 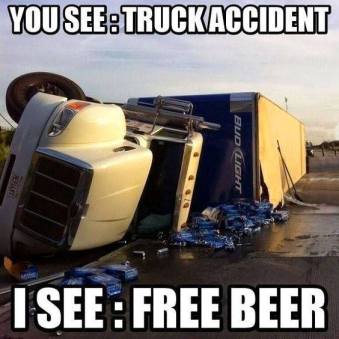