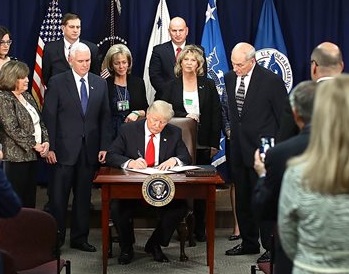 Executive departments and agencies shall employ all lawful means to enforce the immigration laws of the United States .

Executive departments and agencies shall remove all removable aliens, with priority given to removable aliens who have committed criminal offenses or abused any program related to receipt of public benefits.

The Secretary shall immediately take all appropriate steps to immediately plan, design, and construct a physical wall along the southern border.

The Secretary shall issue new policy to terminate “catch and release” and the abuse of parole and asylum provisions.  Unaccompanied alien children shall be properly processed, receive appropriate care and placement, and, when appropriate, be safely repatriated.

The Secretary shall, on a weekly basis, make public all sanctuary cities. Jurisdictions that fail to comply with applicable Federal law shall not receive Federal funds, except as mandated by law.

The Secretary shall, on a weekly basis, make public a comprehensive list of criminal actions committed by aliens.  Victims of crimes committed by removable aliens shall receive support. 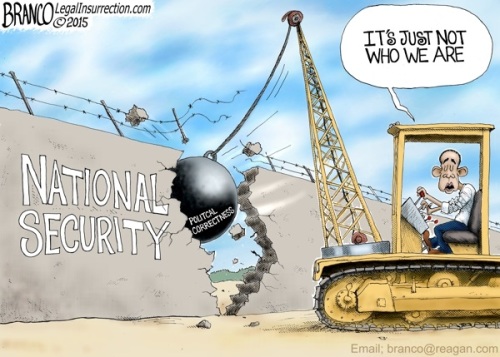 Trump’s order to start building the wall is not by-passing Congress.  Back in 2006, Congress passed a law authorizing the construction of 700 miles of fencing along the southern border, as well as additional lights, cameras and sensors to enhance security.

Then, Democrats got control of Congress a few months later and put an amendment into a 2008 spending bill that took all the teeth out of the 2006 law.

IOW, Democrats buried an unpopular measure they wanted inside a spending bill so they could avoid standing up and taking responsibility for blocking something Americans want done.

But, and this is a big but, the original law was never repealed.  Congress doesn’t have to pass a new law to begin construction.  All they have to do is package the funds necessary to build the original and substantial law into a massive spending bill.

Democrats would have a politically hard time blocking construction, since it would require them to block the spending bill and shut down the government, something they mocked Republicans for doing in the past.

Barack Obama, Joe Biden and Hillary Clinton all voted for the 2006 law.  So did Chuck Schumer and a whole host of other Democrats in the House and Senate, many of whom are still in Congress.

President Trump has said the wall will be from 35 to 50 feet high and made of pre-cast concrete.  He also plans to figure out a way to make Mexico pay for it.

Mexico’s President Nieto didn’t like Trump’s executive orders about immigration and the border wall, so early on Thursday, he canceled their upcoming meeting.

He tweeted, “We have informed the White House that I will not attend the working meeting planned for next Tuesday with @POTUS. Mexico reiterates its willingness to work with the United States to reach agreements that favor both nations.”

Unfortunately for Mexico, President Nieto’s position did not sit well with the global currency market.

As of about noon ET on Thursday, the peso had dropped more than a whole percentage point against the U.S. dollar, exchanging at a rate of roughly 21.31 pesos to the dollar

Comments Off on Dollars to Pesos 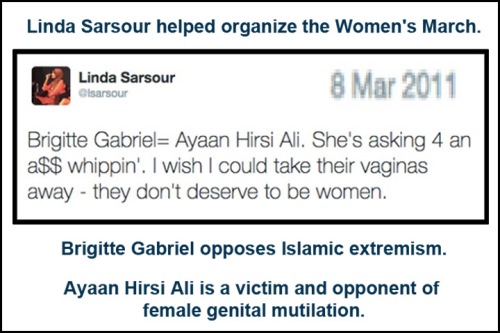 YVONNE tweeted: “Linda Sarsour blocked me after I called her out on this tweet about Ayaan, a victim of genital mutilation.

In a desperate attempt to garner some attention and sense of relevance, the unfunny comedienne Chelsea Handler tried to pick a fight with the First Lady. The results were predictable.

In a video interview with Variety about the Women’s March, Handler mocked Melania Trump’s accent. When asked if she’d have the First Lady on her Netflix series, Handler replied, “Melania? To talk about what? She can barely speak English.”

[CtH: I remember President Obama lecturing us about how we all needed to learn Spanish so we could communicate with immigrants who refuse to learn English.  NOW, it’s apparently okay to mock the accent of an immigrant who not only speaks excellent English and her native Slovenian, but also Serbian, French, Italian, and German.

I googled and found lefty websites questioning whether she actually does speak six languages, but she is absolutely fluent in her native language and the language of her adopted nation.  I’m also inclined to believe she can get by well in French and Italian, since she worked as a model for major fashion houses in Milan and Paris.

I dunno about German or Slovenian, but many Europeans are multi-lingual, so who knows.  My brother once remarked to his Dutch graduate student that he’d done better on Cornell’s English competency entrance exam than most of his American-born students and “It’s your second language.”  The Dutchman responded,  “Actually, it’s my fifth.”]

[CtH: The interviewer made the interview into a drinking game. Unbelievable.  Handler claimed, “Everybody’s voice matters”, then said she would not interview either President or Mrs. Trump and told them both to “f**k off.”  Liberals, this is why we don’t respect any of you or your talk about “ending divisiveness.”  You’re phonies who are too dumb to recognize your own hypocrisy.] 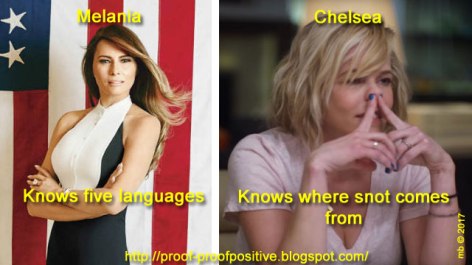 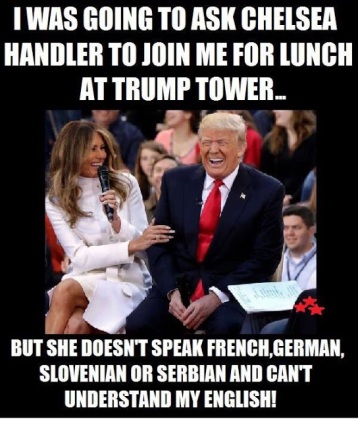 Once again, with her cat-like reflexes, our own CtH has scooped the blogosphere with her post about the Vice President addressing today’s march for life.

[CtH: Yes, well … while Pete was battling the elements delivering newspapers, I was parked in my nice warm office, sipping tea. :)]

I am tasked, therefore, to extrapolate (where the hell did I get THAT word?) on what she initiated. One thing is sure … they won’t leave the tons of trash the Pussy Patrol did last week, and you’ll hear no venomous speech.

One thing that rankles me is that these “enlightened” females whine about it’s their body and their choice. Wrong, wrong, wrong. Once the child has a heartbeat, it’s no longer ‘her body’… it’s the baby’s. They conveniently ignore that.

Strongest White House support yet for March for Life

When throngs of abortion protesters convene Friday for the annual March for Life, they will enjoy the warmest show of White House support in the event’s four-decade history.

Vice President Mike Pence and top Trump adviser Kellyanne Conway will headline the pre-march rally on the National Mall, becoming the highest-ranking members of a presidential administration ever to speak at the annual protest.

Trump to ‘call in’ to the March for Life

President Trump will “call-in” remarks to the annual March for Life event in Washington, D.C., on Friday, according to CBS News White House correspondent Mark Knoller.

[CtH: He’d probably come if it wouldn’t be such a security nightmare for the Secret Service.]

Presidents Ronald Reagan and George W. Bush are the only other chief executives to have addressed the anti-abortion march. They also did it remotely.

ABC aired an interview of the president last night with David Muir. They left this out:

Whoopi On March For Life: We Can Be Both ‘For Life’ And ‘Pro-Choice’

“I’m for life,” Goldberg said. The she turned to the audience and asked, “Is anyone here not for life?  Maybe we should stop talking about being pro-life or anti-life because nobody is not for life. We are pro-choice. That’s the difference.”

Of Republicans, the Democrat congresswoman from California declared, “They pray in church on Sunday and they prey on people the rest of the week. And while we’re doing the Lord’s work, ministering to the needs of God’s creation, they are ignoring those needs which is to dishonor the God who made them.”

[CtH: Is she stupid, uninformed, or just a vicious, hateful liar?]
[bluebird of bitterness: Yes.]

I POSTED A LINK IN THE REPLY SEGMENT CALLED: #MY UNINTENDED JOY. WISH I’D SEEN IT EARLIER. IT’S A BEAUTIFUL ARTICLE ABOUT MOTHERS WHO CHOSE LIFE. I HIGHLY ENCOURAGE YOU TO READ IT. GOD BLESS.

Jan 26, 2017: The corporate office of Chili’s restaurants told LifeNews.com that the Planned Parenthood fundraiser has been cancelled. Chili’s said the fundraiser was the brainchild of a local franchise partner and did not reflect Chili’s philosophy of bringing people together.

VP Pence to speak at March for Life

This is the first time in the D.C. March’s 44-year history that a Vice President of the United States will attend.

I hope Dearest is in a good spot to hear him. 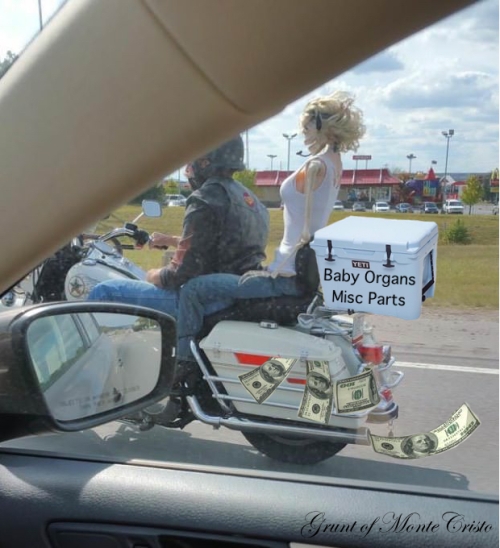