On Saturday, thousands of ladies in vagina hats descended upon DC to demand more dead babies.

The march was an eclectic mix of non sequiturs and falsehoods. Every aspect of feminist mythology was represented in one way or another. But unlimited access to abortion was the theme that tied it all together. Before the march even began, abortion on demand had been proclaimed an essential “unity principle” of the so-called “Women’s March.” They were so serious about this principle that pro-life groups were barred from participating. It’s fair to say that once a political demonstration cites baby murder as a fundamental value, nothing else it stands for really matters. I cannot take a march seriously after it has professed an affinity for child killing just as I cannot willingly consume your homemade chocolate cake after you inform me that fecal matter is one of its ingredients. 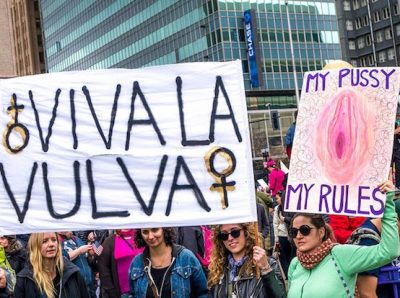 But I’m not sure that I could have taken the march seriously even if continuing the mass slaughter of children hadn’t been named as one of its fundamental goals. It’s hard to take people seriously when they’re all wearing genitalia-themed beanies, after all. It’s even more difficult when they’ve adorned themselves in vagina masks, and full vagina costumes, and are carrying vagina signs, including some grossly explicit and some casually sacrilegious. But please don’t think that it was only a bunch of vaginas walking around. Penises were sometimes represented in the signage and the outfits as well, though usually with a derisive tone. Feminists, as you’ve noticed, are rather obsessed with genitals. That’s why they can’t get together for any kind of event without half of them showing up dressed as their own reproductive organs.

“DHS is in the business of saving lives.”

Lots of good stuff in this video welcoming General John Kelly to his new job heading up DHS.

President Trump at the Dept of Homeland Security [16:31]

Vargas said that yesterday was a “tough” day for him because of Trump’s executive action. Wilkerson, whose son was killed by an illegal, responded, “I don’t know if you understand what a tough day is in the life of a parent who’s lost a child at the hands of an illegal in this country.”

The Remembrance Project: Families of those who have died at the hands of illegals
http://www.theremembranceproject.org/

Comments Off on “DHS is in the business of saving lives.” 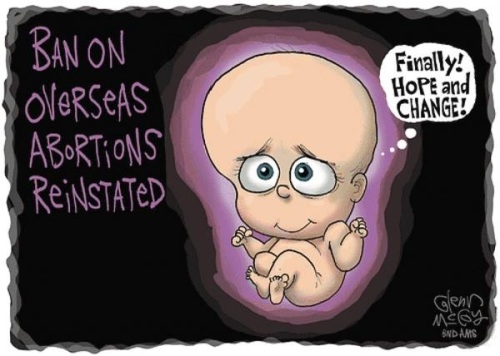 Jan 23, 2017:  President Trump signed an executive order restoring the Mexico City Policy, which bans the U.S. from funding any group like International Planned Parenthood that performs abortions outside the country.  He also took steps to defund UNFPA, a United Nations agency which promotes abortions worldwide.

Jan 24, 2017:  The House passed a bill to completely and permanently ban taxpayer funding of abortions.  Currently, this has to be done year by year.  President Trump said that, if the bill passes in the Senate, he will sign it into law.

Jan 24, 2017:  The Senate voted 96-4 to confirm Trump’s appointment of Governor Nikki Haley as the U.S. ambassador to the United Nations.  She is strongly pro-life and swore she will use her new post to oppose abortion on an international level.

Jan 25, 2017: Sean Spicer announced that Kellyanne Conway and other White House staff will attend the D.C. March for Life tomorrow.  In previous years, Obama marked the day of the march by issuing a presidential statement praising Roe vs. Wade.

Jan 25, 2017: Vice President Mike Pence says pro-lifers should drop what they are doing and show up to the national mall on Friday.  Dearest plans to do just that.

Jan 25, 2017: U.S. Senator Ben Sasse reintroduced the Born-Alive Abortion Survivors Protection Act today in Congress amid strong hopes that the bill will pass this time around. The bill would provide federal legal protection to newborns who survive abortions by requiring appropriate care and admission to a hospital.

The trouble with having severe sleep apnea is that you sleep a lot during the day, so it’s sometimes difficult to sleep at night. It happens to me a lot. Since I have to get up about 12:30 AM anyway, I thought I’d do something constructive.

BEFORE I START, YOU MUST SEE THE LATEST BLR VIDEO. HILLARY IS HILARIOUS.
Trump, Mike Pence, Barack Obama, Clarence Thomas, John Roberts and George W. Bush were all featured in the video, but nobody got it worse than Secretary Hillary Clinton.

THIS IS BRILLIANT. THE MEDIA WILL FOCUS ON THE POOR ILLEGAL FAMILIES THAT WILL BE FORCED TO GO BACK HOME.
TRUMP IS FOCUSING ON THE FAMILIES WHO HAVE BEEN VICTIMIZED BY THESE MONGRELS.
“Angel” parents Mary Ann Mendoza and Steve Ronnebeck traveled to Washington, D.C. from Arizona to meet with the President on Wednesday. They count among the parents to whom Trump gave the opportunity to tell their stories as he campaigned across the United States.

Elizabeth MacDonald recounted how former President Barack Obama told a crowd in 2016 that Trump would need a “magic wand” to bring lost jobs and manufacturing back to America.
Moore said that statement, compounded with Democrats’ becoming “subservient” to billionaire Tom Steyer and his climate-change-advocate allies, have opened the door for union cooperation with the White House.

Convicted crack cocaine dealer Damarlon Thomas was executed Monday night, police said, when two masked men came looking for him. President Obama had commuted his sentence. He was scheduled to be released.
He’d been sentenced twice to probation for selling drugs before the big Sunnyside bust in 2007, in which he admitted to selling 14 grams of crack to a government informant.

IN 2008 AND 2012, OBAMA WON EVERY STATE WITHOUT VOTER I.D. HE LOST EVERY STATE THAT DID REQUIRE I.D. IF THIS PASSES,THE DEMOCRATS ARE IN DEEP SHIT. THEY CAN’T WIN IF THEY CAN’T CHEAT.

The press secretary noted that people often vote twice and even dead people are some states’ voter rolls. As such, the White House is ready to take necessary steps to “study to understand the scope of the problem and to stop the problem going forward.”
One solution President Trump may propose, Spicer mused, is a national voter ID law for all Americans.
“Voting is most sacred right that we have,” Spicer insisted, adding they “must ensure that we know every person’s vote counts equally.”

We have seen such demoralization play itself out in the crying, group cry-ins, and generally hysterical reaction to Trump’s victory.
It’s likely to get worse before it gets better.
Trump is fast out of the gate, and throwing out so much change so fast, it has liberals demoralized.

MORE IN THE COMMENT SECTION.
I SPEND A LOT OF TIME DOING THIS AND RARELY ASK FOR ANYTHING.
I HOPE YOU ALL READ THE POST I DID YESTERDAY WITH THE VETERANS’ OPEN LETTER TO THE PRESIDENT.
I THINK YOU’LL BE RENEWED AS MUCH AS I WAS.