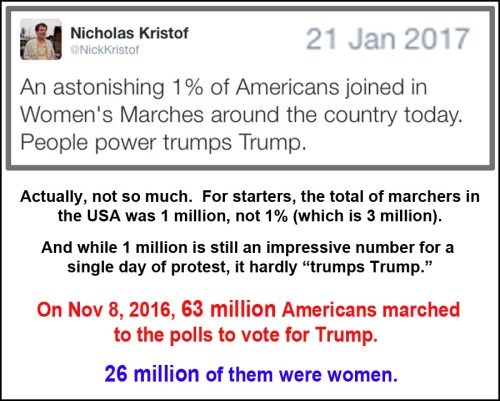 Supposedly, Trump is a misogynist because he said something rude about women 12 years ago.

Plus, if the Left was honest, they’d have to admit how hypocritical it is of them to pretend to be shocked when their own celebrities say and do this kind of thing on t.v. and in movies ALL THE TIME while they laugh and applaud.

And let’s not forget that, during the campaign, Hillary Clinton said the Catholic Church should change its teachings to line up with her political beliefs and called Republicans deplorable because she believes we’re all gynephobic, homophobic racists.

Just four days ago, as People’s Cube noted, Madonna declared a resounding “F— you!” from the podium to everyone who didn’t attend the Women’s March.

I’m tempted to return the sentiment, except that I’m not a nasty woman. I’m a Catholic Republican LADY, who has good manners. I do not use foul language and I certainly do not make vile assumptions about other people based on their political affiliations.

I also have all the legal rights that any American man has and see no reason at all to believe that President Trump or the Republican-majority Congress intends to try and reverse any of them, except for abortion, which I don’t consider a civil right, but a violent travesty of justice.

One response to “Not trumping Trump”