The Eloquence of Cher

One grateful tweeter thanked Cher for her eloquence.

To be fair, the tweeter may have been referring to her comments at the Women’s March.  So here’s an example of Cher speaking, rather than tweeting:

After being asked why she was taking part, said:  “Because I want to be where the cool people are. You know, no, because it means so much. I’m so angry, and I want, you know, like, his people — not his people, some of the people, you know — came on Twitter and said, you know, ‘you’re a crybaby and you’re a whiner,’ and I never cried and I don’t whine. But I want to do something because I don’t believe in him, and I feel sorry for the people who do.” 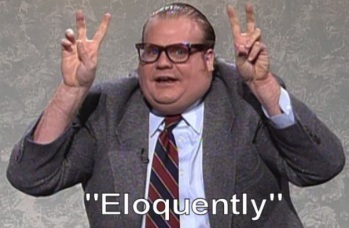 Comments Off on The Eloquence of Cher

From Stilton Jarlsberg: “On the first full day of Donald Trump’s administration, millions of women gathered in cities around the world to deliver the message, powerfully and unequivocally, that we dodged a real bullet by not electing a vagina-owner as President.

“Oh sure, that wasn’t the message they meant to send – but what the hell else is anyone (male or female) with more than a spoonful of brains supposed to think? The angry protesters donned ‘pussy hats’ and vagina costumes to prove they’re not just sex objects and should be taken seriously.  Which, frankly, we find hard to do when a glowering woman has turned her face into a clitoris.” 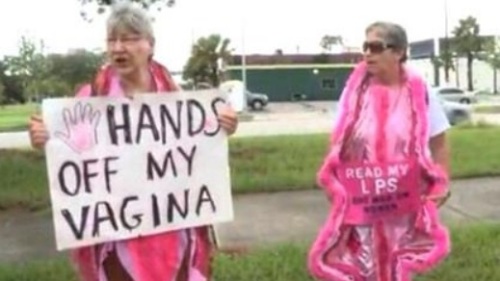 Just thinking the original suffragettes like Susan B. Anthony are probably spinning in their graves. 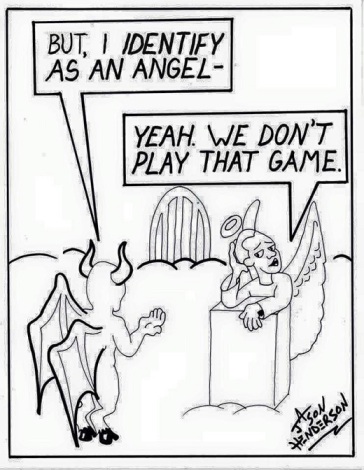 This video is VERY WELL WORTH YOUR TIME!

Trading a Show Horse for a Work Horse

The differences between Barack Obama and Donald Trump are stark.

Barack Obama received his education at the exclusive Punahou School in Hawaii, paid for by his maternal grandmother who, decades later, he would refer to as a ‘typical white woman.’ There is no evidence he ever did homework, as he eschewed work as it interfered with his love for goofing off and getting high with his ‘choom gang.’

He realized early in life his white half got him no special favors. Being black earned him a pass to Columbia, and later to Harvard after he applied as a foreign student (Indonesian). He was named head of the Harvard Law Review, strictly so the school could brag about having a black man in that position. He never wrote a single sentence or published one article while at the Review.

No one will ever know what kind of student he was since he had his records sealed by court order before he ever ran for office. What we do know is that for his entire term, he avoided as much work as he could. As an Illinois state senator he rarely made legislative sessions and almost never voted except ‘present.’ His friend, Senator Emil Phillips, wrote a couple small, almost meaningless bills for him to present as his own. His reputation at the Chicago School of Law was as a lazy person who never attended meetings. The school’s board insisted he be given an office and a class. You can draw your own conclusions why. He is lazy, narcissistic, and a world class hedonist.

Donald J. Trump received an economics degree from the Wharton School of the University of Pennsylvania in 1968. In 1971, he took charge of his family’s real estate and construction firm, Elizabeth Trump & Son, which was later renamed The Trump Organization. During his business career, Trump has built, renovated, and managed numerous office towers, hotels, casinos, and golf courses.

Rather than avoid work, he thrives on it. He is strong-willed, which is a must if you want to run the country, but is not dictatorial. He realizes that to succeed you need people who are experienced and are the best at what they do. He worked for everything he has and apologizes to no one.

Unlike Obama, who has to squat on other peoples’ property for his frequent getaways, Trump owns his own resorts and golf courses. Even though he loves golf as much as Obama, his priorities are focusing on undoing the harm his predecessor wrought. The country is far better off with Barry on permanent vacation.

According to WKMG, Lt. Debra Clayton’s husband received a phone call from President-elect Donald Trump in the days after her death. Florida State Attorney General Pam Bondi said on Wednesday that Trump and Seth (Clayton’s husband) had a “brief, very touching, private conversation between two husbands.” Lt. Debra Clayton left behind a devoted family and many relationships in the Orlando community.

A little-known fact was that after he first killed his ex-girlfriend then shot Lt.Clayton he had a clear path to escape. Instead, he walked over to the fallen officer and shot her in the face numerous times.

Loyd bellowed, “They beat me up,” while cops paraded the nabbed suspect with a swollen and cut face in front of reporters, video shows.
Mina said at a press conference that Loyd received minor “facial injuries” after briefly resisting arrest, and that he had also attempted to flee at one point.

TSK TSK. WHEN YOU BUTCHER A COP, BAD THINGS MIGHT HAPPEN TO YOU ON THE WAY TO THE LOCKUP. ASSHOLE.

Trump said he spoke with Georgia Gov. Nathan Deal on Sunday and planned to speak with Florida Gov. Rick Scott as well.  During the swearing-in ceremony for his top advisers on Sunday, Trump expressed his condolences for the lives lost and damaged caused.

Remember when Obama stood by and did nothing after the BP oil spill for two months until the slick made landfall, wiping out hundreds of businesses and costing tens of thousands of jobs just so he could use it as an excuse to shut down all drilling in the gulf? How about the ice storms that devastated Kentucky or the floods that hit Nashville? The tornadoes in Missouri, Oklahoma and Texas? Oh,wait … those states didn’t vote for him. Sorry, can’t help you.

Trump looks to speed up Keystone XL with executive actions

Trump plans to move soon on issuing the executive order to end the carbon metric, while issuing a second order to remove regulatory roadblocks for approving trans-border pipeline projects such as the Keystone XL project to connect Canada’s oil sands to U.S. refiners in the Gulf of Mexico, Bloomberg reported

The pipeline order would remove the State Department’s authority to review pipeline projects that cross U.S. borders, which appears to be an attempt to speed up project reviews and remove proceedings that could create a way for environmental groups to block the projects.

THE PRESIDENT SHOULD RIGHTLY POINT OUT THAT THE PIPELINE MEANS 20-30,000 UNION JOBS, ALONG WITH ASSOCIATED SERVICES LIKE RESTAURANTS AND MOTELS FOR THE WORKERS.

THERE’S A NEW SHERIFF IN TOWN. GET USED TO IT.

THE STUPID! IT BURNS!! 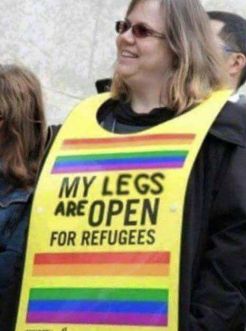 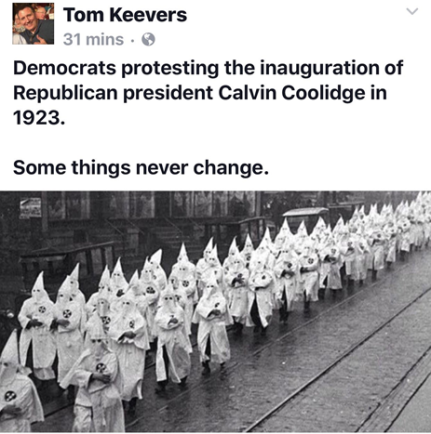 WONDER WHAT THE OTHER SIDE IS UP TO?
CHECK THE COMMENTS SECTION FOR MUCH, MUCH MORE

A Man of Faith

In the preamble to Obama’s mercurial rise to the presidency on nothing more than his race and a catch phrase, his swooning media whores bent over backwards to convince the sheeple that even though his daddy was a Muslim, his adoptive father was a Muslim, Barry was, indeed, a CHRISTIAN! If anyone suggested otherwise they were set upon without mercy. During his appearance one time on This Week with Little Georgie Snuffleupagus, he referred to his Muslim faith. The little Greek quickly corrected him: you mean Christian, don’t you Mr. President?

During his entire reign of chaos, I don’t remember him ever darkening the doors of a church, even on Easter or Christmas, except to show off at a black church where he was regarded as the Messiah. He cancelled the national prayer breakfast numerous times but never, ever forgot a Muslim holiday. Foremost, his every effort was to glorify Islam and offer his aid and protection in any way possible. All the Syrian “refugees” he’s been welcoming here to bring their murderous ways with them there were almost no Coptic Christians who are being systematically slaughtered in Syria and elsewhere.

He let it be known from day one that he was intent on the extermination of the state of Israel. He even sent some of is henchmen to try to defeat Netenyahu, which is why the Democrats’ whining about Russia influencing our election was so absurd.

During President Trump’s inauguration there were 6 prayers. He attended church both Saturday and Sunday in between his duties as president. The minister who spoke with him during a prayer meeting the night before was on with Judge Jeanine Pierro and he said that although Trump was largely secular he would probably do more for the Christian faith than people realize.

Something you would never, EVER see Mooch do:

At his inauguration as the 45th President of the United States, President Donald Trump put the globalist establishment that has been selling out America for so long on notice: The American people are back in charge.

No doubt globalists and establishment types — in both parties — were left squirming in their seats at the thought of it all.

In yet another reference to God and a nod to the Christian voters who were so crucial in propelling his successful campaign to the White House, Trump also quoted the Bible in his speech. Specifically, Trump referred to Psalm 133:1, which tells of “how good and pleasant it is when God’s people live together in unity.” He also noted that America must rely on divine protection for security.

Trump: ‘We’re not here to help ourselves’

Speaking in the White House East Room Sunday afternoon, President Donald Trump told the assembled senior staff, “You’re very important.”
“This is not about party. This is not about ideology. This is about country,” he continued. “It’s about serving the American people.”
“But with faith in each other and faith in God we will get the job done. We will prove worthy of this moment in history. It may very well be a great moment in history.”

I am not the most devout of Christians, but I truly believe that Almighty God had mercy on us when, against all odds, he sent a messenger to ease our burden and perhaps, use Trump as a tool to stop the wanton murder of the unborn and the persecution of his children everywhere.

[CtH: As Dearest and I were walking out of the hospital this morning, I took his arm and told him I love him.  He laughed and remarked how romantic he was for taking me on a date to the hospital.  I laughed back and said at our age, you take your dates where you can get them.  But seriously, just this morning I was reading about how hospitals didn’t really exist before Catholics started building them.  In fact, the idea of compassionate charity was basically invented by the followers of Jesus.  So as we chuckled about our “date,” I was also thanking God that we not only have a hospital to go to, but that it’s a good one and not terribly far away. P.S., I had some blood work done.  I go back on Wednesday for x-rays and CT scans.]

Comments Off on A Man of Faith

My grandfather and I often had philosophical arguments.

When I proved I was right he’d say: ‘A broken clock is right twice a day.You got a ways to go.’

My grandfather was not a compassionate man.

The day before the inauguration I predicted that Fox News would crush the ratings for all the alphabet networks.

Turned out that was a sucker bet.

In the key 25-54 demographic advertisers covet most, Fox more than tripled CNN and MSNBC combined, according to Nielsen Research.

Do you know what these three men have in common?

Muslim terrorists all over the world have a goal of meeting Allah. These devil dogs will do their best to expedite that meeting….OO-Rah!

THE PATRON SAINT OF CHAOS 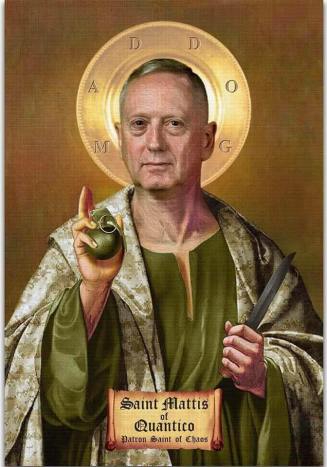