A Bunch of Women Went to Washington

We don’t complicate anything.

So today a crowd of menopausal harpies gathered to vent their obvious sexual frustrations at a man who has hardly done anything yet, except shatter their fantasy of having a vagina ruling the country. They were accompanied by some sissy men who ventured out of their parents’ basements hoping, with all those females, that they might score a date. There were similar protests being held all over the nation, meaning that somebody is making big bucks selling batteries for marital aids. Just sayin’.

Hundreds of thousands stream into DC for Women’s March 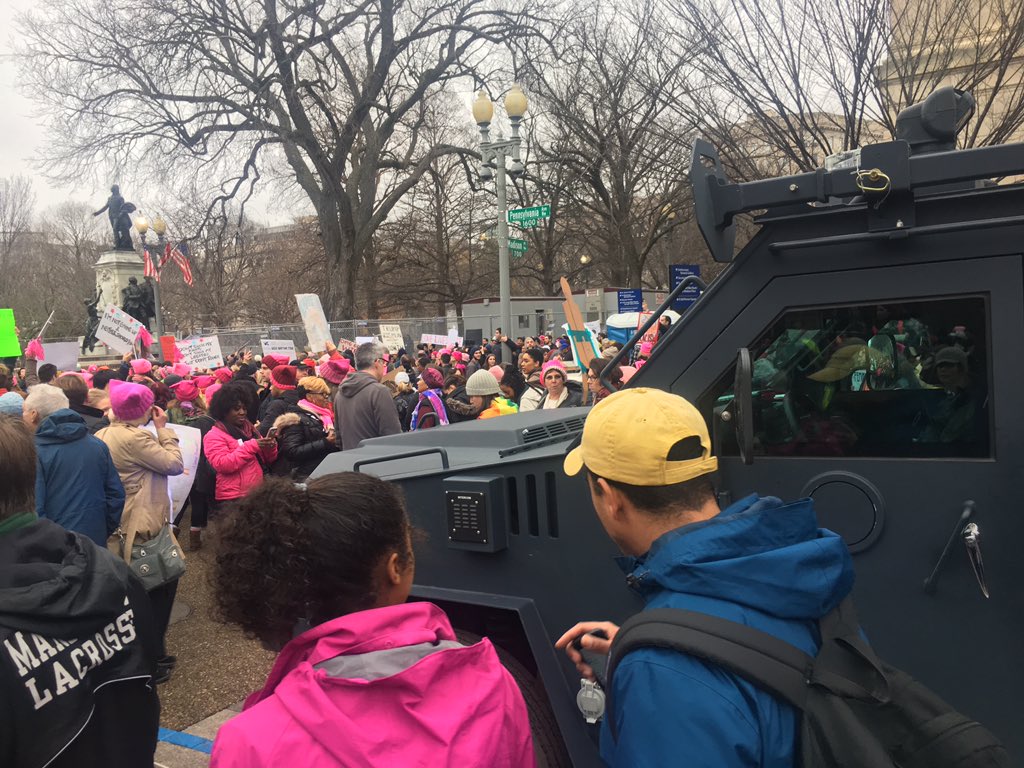 “I think everybody felt disappointed, I think we thought things were going in a different direction. And I think also to connect with like-minded people so that we can make sure that if there are threats to our freedoms that we can stand together.”

Only pro-abortion women were allowed to partner with the so-called “Women’s March” in Washington, but the president of America’s largest organization of pro-life youth decided to crash the march anyway with her group’s own message about abortion and women.

As Women Take To The Streets To Protest Trump, Hillary Clinton Tweets Words Of Support

Organizers say the Women’s March on Washington was intentionally scheduled for one day after the presidential inauguration with the aim of sending a message to the newly minted administration: Women’s rights are human rights.

The Queen Bee: Michael Moore Leads The Women’s March In Washington D.C.
THIS FAT BASTARD HASN’T HAD A STEADY JOB SINCE HE WAS JABBA THE HUTT’S BODY DOUBLE

Moore goes on reading the paper “‘New President vows to end American carnage.’ Mr. Trump we are here to vow to end the Trump carnage.”

No that was not a typo, Michael Moore actually said that the Women’s March has gathered to end the carnage from Donald Trump while speaking at a heavily pro-abortion abortion event.

Exactly what carnage has Mr. Trump caused? Michael Moore gives no examples because there are none.

THIS VIDEO IS 16 MINUTES. I COULDN’T SURVIVE TWO.

Madonna Threatens To Blow Up White House; Drops Multiple F-Bombs On Live TV!
THIS IS THE OVERPAID WHORE WHO OFFERED LEWINSKYS FOR ANYBODY VOTING FOR HILLARY

WHAT A GREAT IDEA!! WE CAN DEPORT ALL THE ILLEGALS AND HAVE THESE SHREWS WASH DISHES, BUS TABLES, MOW LAWNS AND PICK PRODUCE …. THAT’LL WORK!

“We won’t go away, welcome to your first day,” women marchers chanted near the White House.

It’s ironic that they’re threatening to never leave, since many of the protesters are actually leaving tomorrow or the next day after having been bused in from around the country and even from Canada.

“Oh, if I could but live another century and see the fruition of all the work for women! There is so much yet to be done.” -Susan B. Anthony

I’m thinking she should be glad she did not live to see what feminism has become.

Trump’s inauguration crowd was the largest in history.

The Lame Stream Media LIED and claimed that Obama’s inaugurations were better attended than Trump’s.

They also yammered about how many people were at the Women’s March.  But you know that next week, when a bajillion people come to D.C. for the Pro-Life March, the biased slimeballs will IGNORE the whole thing AGAIN, just as they have every other year. Because. They. Hate. Us.

This video is worth five minutes of your time.  Spicer uses words like “irresponsible” and “reckless” and promises the White House will be holding the media to account.  GOOD!

I’d like to see the condition of D.C. that the Trump supporters left, so we could compare it to the mountains of TRASH those Obama inauguration fans left.

Also, Dearest would have loved to go to the inauguration, but he is already committed to the Pro-Life March and can’t afford to take that much time off from work twice in one month.  I’m guessing there are many like him who would have swelled Trump’s crowds even more, but who had to choose between work, Trump cheering, and standing up for the unborn.

P.S., I hope Spicer gets a decent tailor.  That suit coat fits him very badly.

They say that brevity is the soul of wit. Brevity has never been one of my long suits. However, there is no possible way to cover a fraction of what transpired yesterday.

I got up this morning and the sun was out for the first time in what seemed weeks. A fitting metaphor for the beginning of a new era. We can look forward to 4 years of liberal whining, temper tantrums, celebrities preening, and the term ‘fake news’ taken to a whole new level.

I’m going to try to break this down into several easy-to-digest posts. A large number of links I had bookmarked have been deleted since news has a rather short shelf life.

THIS CLASSLESS HACK WAS SUPPOSED TO INTRODUCE VICE PRESIDENT PENCE. HE STARTED TO FILIBUSTER AND THE CROWD SHOWED THEIR APPRECIATION FOR THE VENOM HE ALWAYS HAS READY TO SPIT AT THE FIRST REPUBLICAN THAT COMES INTO RANGE.

[CtH: I can ignore the alt-left whack jobs, but when the minority leaders in Congress call us vile names, it really rankles. Besides which, Pelosi is a fellow Catholic and Schumer is my senior senator, so they bug me even more! Harumph.]

The Thrill: The Story of Chris Matthews and Barack Obama

HIS MANCRUSH HAS LEFT THE BUILDING

[CtH: Seriously?  Did these people watch the same speech I did?!]

‘Is he crazy enough try something? To drop a bomb in the middle of the Pacific? Something I have to react to.’

‘And that would be — but I’m thinking, when [President Trump] said today, America first, it was not just the racial, I mean I shouldn’t say racial, the Hitlerian background to it, but it was the message I kept thinking.’

THE TINGLE IS GONE

‘It Was Militant and It Was Dark’: Rachel Maddow Says Trump’s Speech Was ‘Hard to Hear’

“It was militant and it was dark,” Maddow said. “The crime, the gangs, the drugs, this ‘American carnage,’ disrepair, decay. You can’t imagine the outgoing president giving a speech like that.”

[CtH: No, cuz Obama just lied about how great everything has been under his watch and then right back to blaming whites, Republicans, and cops for everything bad.]

IF YOU HAVEN’T SEEN HILLARY GIVING SLICK WILLIE THE DEATH STARE, YOU NEED TO

[CtH: I’m sorry that this is just FUNNY!]

[CtH: I actually saw someone on Facebook going on and on about how beautiful and classy and wonderful Michelle was as FLOTUS.  I remember a lot of this scowling and sneering and especially that time she rolled her eyes and said, “All this for a flag.” Also, that other time when she let the WH organic garden go to hell, because the government was shut down and she couldn’t be bothered to LET’S MOVE her butt out there and harvest any of that good produce she supposedly cared so much about.]

[CtH: I gotta give them credit for coming.  This had to be a very bitter pill, but unlike the whiny House Democrats who had to retire to their safe space and suck on their binkies, these two actually came.]

[CtH: I’d like to see the condition of D.C. that the Trump supporters left, so we could compare it to the mountains of TRASH those Obama inauguration fans left.  Also, please to point out that a bajillion Pro-Lifers like Dearest are already committed to a trip to Washington next week and, yeah, can’t afford to take that much time off from work in a single month. ]

THE DIFFERENCE IN FIRST LADIES MUST BE SEEN TO BE APPRECIATED
MELANIA’S ORIGINAL RALPH LAUREN CANNOT BE BOUGHT (SORRY, CHRISSY) — IT WAS MADE EXCLUSIVELY FOR HER.

[CtH:  Aw, Pete!  You so flatter me!  As if I could BEGIN to wear anything our new hot supermodel babe of a FLOTUS can wear!]

I’m not a predator!

“They pray in church on Sunday,” Pelosi says about Republicans, “and prey on everyone the rest of the week.”

Really, Nancy?  And you think that, after calling me and the other umpty million religious Republicans in this country PREDATORS, we’re supposed to LISTEN to what you think we should do to be “real” Christians?

This is why you lost, Madame Not-The-Speaker.  “Republican” is not synonymous with evil.  The fact that you think it is says more to me about your heart than it does about mine.

Comments Off on I’m not a predator!

The removal of a bust of Winston Churchill from the White House was one of Obama’s earliest moves to demote the special relationship with Britain. It was symbolic in so many ways, and served as the gateway drug for his world apology tour to follow.

Just as symbolic is that on his first day in office, President Donald J. Trump restored the bust to the White House, as shown in this photo.

The return was arranged at Trump’s request to Britain.

Comments Off on Churchill is back