The Paris Climate Agreement will cost at least $1 trillion per year, and climate activists say it will save the planet. The truth? It won’t do anything for the planet, but it will make everyone poorer–except politicians and environmentalists. Bjorn Lomborg explains.

The real cost of Obamacare

President Obama’s own administration estimated that Obamacare would increase premiums, yet the man whose name is most closely associated with the legislation REPEATEDLY told us all NOT TO WORRY, because premiums would go DOWN.

And it’s not just premiums.

A recent analysis of Obamacare’s impact on our economy shows that all of the many, many new regulations have added 172 million hours in extra paperwork and caused a 26% increase in the real cost to employers for mandated health coverage.

Comments Off on The real cost of Obamacare

The Left is so confusing!

Comments Off on The Left is so confusing!

Baby Bootz went with his sibs for their check-ups.  When Mama Buzz asked when she should start Bootz, the dentist said, “Well, let’s just do it now.”  Everything is fine.  His baby teeth are coming in correctly and he has no sign of cavities.

Here is Bootz in the kid-friendly waiting room.  It is a PEDIATRIC dentist, after all.  Mama loves the kids’ dentist and wishes he took adults too. LOL

“His whole life is a fantasy”

This interview is well worth your time.

I have found the same thing Hannity says he found.  I.e., NO area of the world where Obama improved foreign relations and NO economic indicator that showed anything positive for the middle class or the poor.

The good news is that the fact Obama ruled by fiat means Trump is going to be able to undo 75% of Obama’s mess within the next few weeks.

I’m going to make a wild prediction:
Fox News will crush CBSNBSABCCNNMSNBCPBSCNBC. I may be wrong. I was wrong the last time I made such a prognostication. Terribly wrong. And absolutely never happier to be so. Had my prediction of Mme. Pantsuit gotten elected, I wouldn’t be sitting here doing this.

For those into industrial strength schadenfreude, turn on CNN or MSDNC for awhile and watch the bubbling cauldrons of bile being forced down by people on the verge of dementia. Drink deep their tears and be refreshed.

[CtH: I guess she would know!]

At Final Briefing, Obama Remarks on Transition, Israel, and Post-Presidency

‘It’s been an honor’ 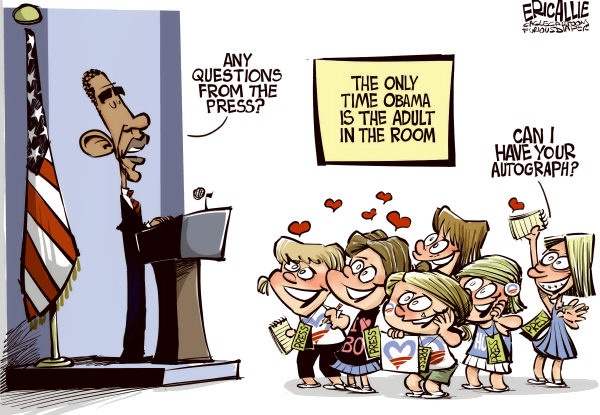 President Obama began his final press conference on a surprising note. Despite “not liking all of the stories you’ve filed,” he told the gathered White House press corps that it’s your duty to ask “tough questions” and not be “sycophants.”

Too bad reporters were apparently not paying attention.

What followed was one softball after another, with rhetorical foot massages sandwiched between.

“It’s been an honor,” said another, before literally making the “call me” expression while pointing at her cellphone.

A reporter for The Blade, Chris Johnson, used his opportunity to ask the president a question to instead list a series of LGBT “accomplishments” Obama enjoyed during his tenure — before setting the president up to attack Trump.

Obama uses his final press conference to issue extraordinary warning to Trump that he will step in if he ’rounds up’ children for deportation, hits voting rights or ‘silences dissent’

In his final press conference, Obama brought up contentions issues for the U.S. citizenry, and pointedly told Trump he would speak up if his successor strayed far from current policy on rights issues.

He mentioned ‘systematic discrimination’ and efforts to ‘punish’ immigrants who came here as children.

He praised the press for making ‘this place work better’ in another signal to Trump, who has attacked networks and news outlets.

Invokes Jim Crow efforts to ‘restrict the franchise’ and prioritizes voting rights amid looming fight with the GOP over voter ID laws.

As Cold as My Ex-Wife’s Heart

YOU NEVER KNOW WHAT TO EXPECT WHEN YOU DROP BY HERE

Geez this is ridiculous. IIRC, Chrissy’s warrior princess is (or was) stationed there.
Word is it’s so cold flashers were just showing pictures of themselves.

59 below recorded in Interior as cold snap settles on Alaska
Fairbanks and Anchorage woke Wednesday to the deep-freeze of an expected cold snap this week, as temperatures plunged to 50 degrees below zero in some areas of the Interior.
The lowest temperature recorded by the National Weather Service Wednesday morning was 59 below on the Salcha River near its confluence with Flat Creek, said meteorologist Dan Hancock in the agency’s Fairbanks office.
By 4 p.m., the temperature on the Salcha had risen 20 degrees — to 39 below, Hancock said.

Cops: Pair Had Sex While Kids Were In The Car
NO, THEY WEREN’T IN ALASKA AT THE TIME