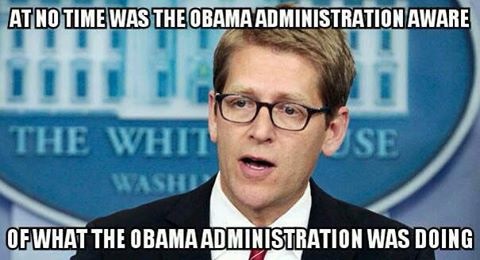 They’re saying “Obama’s presidency was scandal-free” but that don’t make it so.  Here’s a short list from Breitbart of the many scandals Team Obama would like us to forget:

AG Eric Holder held in contempt of Congress: Holder was the first sitting member of any president’s cabinet to earn this distinction.  Of course, Democrats closed ranks behind Holder, the White House protected him, and the media allowed him to spin the contempt vote as mere “political theater.”

ObamaCare: Everything about ObamaCare is a scandal, from the President’s incessant lies about keeping your old plan if you liked it, to Rep. Nancy Pelosi’s insane statement “We need to pass it to find out what’s in it.”

The IRS scandal: A highly politicized IRS admitted to selectively targeting conservative groups, then brazenly lied about not having backups of relevant computer data.

Benghazi: Libya was a disaster after Obama’s unlawful military operation. Ambassador Christopher Stevens was sent into a known terrorist hot zone without sufficient security. And the Obama administration knowingly told a false story during the first few weeks after the attack.

Hillary Clinton’s secret server: She perpetrated her email offenses while working as Obama’s Secretary of State and he knew about it.

The Pigford scandal: The abuse of a program meant to compensate minority farmers for racial discrimination exploded under Obama.

NSA spying scandal: Snowden’s pilfering of sensitive National Security Agency data was a debacle that damaged national security. President Obama and his administration made many false statements as they tried to contain the political damage.

Bowe Bergdahl:  The prisoner swap that freed him from the Taliban and its allies was riddled with lies, illegal activity, and bad judgment.

Iran nuclear deal and ransom payment: Everything about Obama’s dealings with Iran has been scandalous, beginning with his silence while the Green Revolution was brutally put down by the mullahs in 2009. The Iran nuclear deal was pushed with lies and media manipulation. The infamous pallet of cash that wasn’t a ransom has become symbolic of Obama’s mendacity and penchant for breaking the rules, when he thinks following them is too much trouble.

Polluting the Colorado river: The Environmental Protection Agency managed to turn the Colorado River orange under this greenest of green Presidents. Of course there was a cover-up.

The GSA scandal: The General Services Administration was caught wasting ridiculous amounts of taxpayer money on lavish parties and silly projects.  Of course there was a cover-up.

The VA death-list scandal: Veterans were put on secret death lists while executives handed in phony status reports and signed themselves up for big bonuses.

Shutdown theater:  Obama hit the American people hard during the great government shutdown crisis of 2013, doing everything he could to make American citizens feel maximum pain – from using “Barry-cades” to keep war veterans away from their memorials, to releasing illegal alien criminals from detention centers.