Two days ago, this appeared in Salon’s Twitter feed. 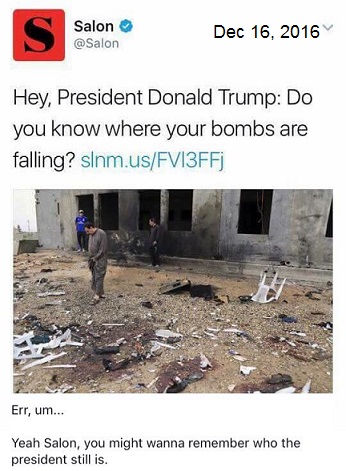 I posted it as part of my Mean. Stupid. Crass. blog yesterday, because it said Trump is president.

When Pistol Pete pointed out that it was an ISIS bomb, not an American bomb, I set out to find the source of the photo, something I only accomplished after I abandoned my initial and faulty assumption (based on the date of Salon’s tweet) that the incident was RECENT.

It’s not.  It’s from last MARCH, seven months before Donald Trump was elected and nine months before he WILL BECOME our new president.  The headline of the story with the photo reads:

25 March 2016:  Teenage ISIS suicide bomber blows himself up at a football stadium near Baghdad, killing at least 65 people and injuring more than 60.

Please note: Pistol Pete was right. The bomb was not dropped by an American plane, as the Salon tweet suggested. An ISIS fanatic did it.

What Salon says of itself:  “Providing fearless political journalism and cultural analysis since the dawn of the digital era.”

Comments Off on Dumb. Dumber. Dumbest.