Comments Off on The Bottom Line

“Having an unqualified person in the Oval Office is a cause for concern.”  Yeah, a lot of us have been concerned about this for the past 8 years.

Tucker Carlson Tonight:  Because nothing says unity like an Electoral College coup.

“We’re trying to unite the country!”  This only makes sense inside the black hole that is the Liberal Mind, where things like “unite” and “bipartisan” actually mean “We get what we want and right-wingers don’t.”

This is nothing new. Remember back in October 2010 when Obama said Democrats were in the driver’s seat now. “We don’t mind the Republicans joining us. They can come for the ride, but they gotta sit in back.”

Comments Off on Tucker Carlson on attempts to hijack electoral vote

Hillary lost because of Hillary

One of Hillary Clinton’s closest friends, Diane Blair, nailed it years ago when she noted that, while to her Hillary Clinton was “funny, wicked and wacky”, to others she came across as “a malevolent, power-mad, self-aggrandizing shrew.” 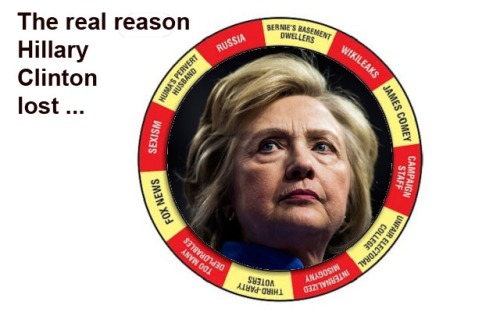 Comments Off on Hillary lost because of Hillary

The Disgust Gags On

News:  Ivanka Trump will work out of the White House office that is usually reserved for the First Lady, because Melania plans to stay in New York with son Barron so he can continue at his old school.

“Either Trump is f***ing his daughter or he’s shirking nepotism laws. Which is worse?”

In the ensuing uproar, Politico canned Ioffe and sent a righteous memo to their writers to watch what they post on social media, because it reflects on Politico.

Now … before you get too excited about the possibility that the Slime Stream Media is cleaning up their act AT ALL, be aware that Ioffe was leaving Politico anyway to go write for The Atlantic.

Politico Reporter Lands Job at The Atlantic After Accusing Trump of Sex with Daughter [1:48]

After Politico canned her, Ioffe tweeted a faux apology in which she said,

“I do regret my phrasing.”

“Oh, really; the phrasing? Should you have used ‘banging’ instead then? Is that it? All you regret is being fired.

“One thing that 2016 has sure taught us: The Left is going above and beyond in exposing just how twisted fringe they are. And when they are bitter, the nasty reaches epic levels.”

“just now seeing the @juliaioffe news. Are you telling me after the last 18 months we’re gonna get the vapors because of a single tweet !?!”

“Are you KIDDING me? You have the utter audacity to talk about vapors, Mr. Fainting Couch extraordinaire?

“The press loses its collective mind (I think they do just share ONE) over every single Trump tweet. Every. Time. Pearls are clutched, histrionics are rampant, and fainting couches have huge arse-shaped divots in them now.

“Further, how on earth can you in good conscience defend Ms. Ioffe’s reprehensible statement?  Oh, that’s right. Conscience is hard.”

Chrissy the Hyphenated would like to point out at this time that Lori Ziganto counts her [Chrissy’s] brother as one of her favorite teachers ever.  Chrissy the Hyphenated is exquisitely proud of said brother for teaching actual American history and actual economics in a public school.  God alone knows how many young minds he saved from toxic liberalism.

Comments Off on The Disgust Gags On

We put up with 8 years of what we have good cause to consider the worst administration ever.  It’s time for the Left to put on their Big Kid Panties and do the same.

They really do believe their feelings matter more. Olivia Corn, president of the Cornell University College Republicans, claims that the day after the election last month, she was shoved to the ground and her attacker yelled at her, “Fuck you, racist bitch. You support a racist party!” 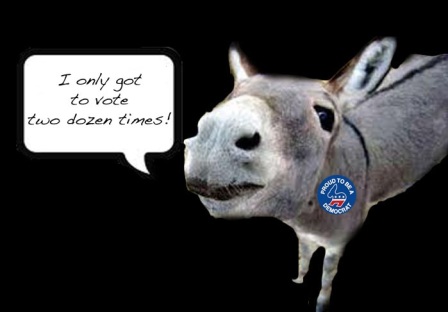 Comments Off on Save the Snowflakes!

Read it. You know you want to.

“We might think of farts as trapped gas, but the history of farting is more than just hot air.”  Read the rest @ http://www.thedailybeast.com/articles/2016/12/04/how-a-fart-killed-10-000-people.html

The Farting Contest [15:17] – I heard this first way back when I was in college.  It’s still fall down funny!

Comments Off on Read it. You know you want to.

Five minutes after a state legalizes our “right to die”, those of us who need help to live are burdened with the DUTY to die by those who would rather be shut of our needs than pull up their socks and help.

The most devastating thing in this video is the real life consequence we’re seeing in Oregon, where euthanasia is legal.  Insurance companies are sending patients letters saying, “We’ll pay for you to die, but not for you to live.”

Local churches, groups and individuals have joined disabled rights organizations, faith-based groups and advocates for the terminally ill in opposing California’s End of Life Option Act, SB 128, which is based on Oregon’s successfully enforced assisted-suicide law.

Comments Off on No to Euthanasia