Rep. Tom Price, a congressman from Georgia and former physician, was named by Donald Trump to head Health and Human Services. With his political and medical background, he may be the perfect person to reform ObamaCare.

He’s already put forward a workable plan, the Empowering Patients First Act, that would vastly improve our nation’s health care system by repealing the Affordable Care Act (Obamacare) and replace it with patient-centered provisions that would control costs and expand coverage in the private health insurance markets.

Comments Off on Exchanging Obamacare

Northern Illinois is getting their first taste of snow for the season. They originally forecast 1-3″, but have revised it to 3-5″. These same “experts” can state unequivocally that the temperature will rise 1/10th of a degree in 200 years so we must throw trillions in tax money to third world toilets to combat “climate change.”
The sad sack Chicago Bears are playing the equally inept San Francisco 49ers. Chicago is 2-9, the 49ers even worse at 1-10. It’s such a sad state of affairs Chicago fans are hoping for a loss to move up in the order for the college draft next May. It looks like the game is being played in a snow globe.

The pardon would avert Bergdahl’s court-martial trial, which is slated to begin April 18.
He is facing charges of desertion and misbehavior before the enemy that endangered fellow soldiers.
President-elect Donald Trump criticized Bergdahl on the campaign trail, calling him a “dirty, rotten traitor” who “should have been executed,” the Hill reported.

Junior would lose his chance at getting elected again, so he wants a pardon.
Jesse Jackson Jr. urged President Barack Obama Thursday to pardon millions of former prison inmates, a group that would include Jackson and his wife, former Chicago Ald. Sandi Jackson.

Will Obama pardon Clinton and cement his legacy? 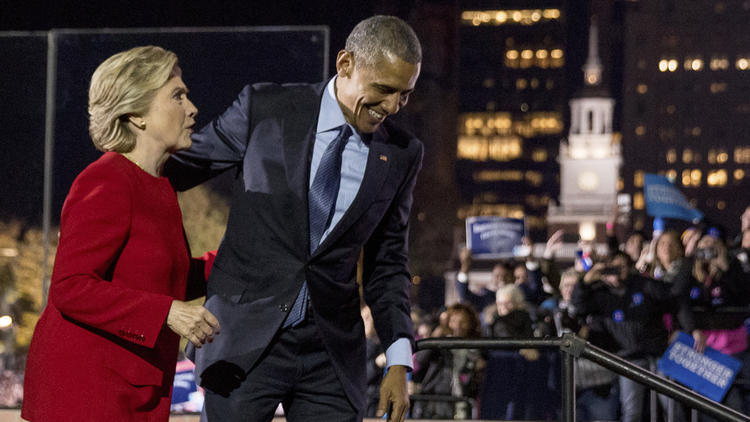 Before there’s any more talk of carving out a chunk of Mt. Rushmore for him, or more talk of statues or temples in his name, there is that Hillary Clinton pardon issue.
Would Obama give his former secretary of state a preemptory get-out-of-jail card before he leaves office and turns the White House over to Donald Trump?

Texas Gov. Greg Abbot says the state will cut off funding to any public school that declares itself a “sanctuary campus” for illegal immigrants.
Abbot made the announcement Thursday via Twitter, in response to a petition effort in the state by students seeking to have their universities protect illegal immigrants. Abbott made it clear such a move wouldn’t fly in Texas.

OBAMA AND REID ARE GOING TO SCREW TRUMP ANY WAY THEY CAN
Harry Reid and President Obama are circulating a petition to remove the hold on FCC Commissioner Jessica Rosenworcel so that she can be reconfirmed before Congress recesses next week
If Obama and the Senate Democrats successfully reconfirm Rosenworcel, the FCC will remain in Democratic control during President-elect Trump’s administration. Her reconfirmation would block Trump’s ability to nominate both Jamison and Eisenach.

YOU WONDER HOW DINGY HARRY REID, THE MOST REVILED MAN IN NEVADA, KEPT WINNING?
Edward Snowden, Willie Nelson, Waylon Jennings and dozens of movie stars were registered to vote in District 15 according to Mr. Vaughan. Mr. Vaughan tested a sample of 200 people of the 9,200 return mail and found that 185 of those had indeed voted.
Mr. Vaughan and many others have testified that they went to the polls to vote only to be told they had voted already. They were given a provisional ballots which would only be counted if the total vote count was within 1% according to poll supervisors.
A total number of 17,086 votes were cast in District 15 for both Republican and Democrat candidates. 9,200 voters on the voter rolls who, by law, should not be on the voter rolls is a huuge discrepancy. Vaughan reported the certified returned mail issue to Secretary of State Barbara Cegavske, who according to Vaughan, sent the issue back to Clark County to investigate itself.

“She’s awesome,” said one activist of Schlapp, one of the Hill’s “50 Most Beautiful People” and the influential wife of Matt Schlapp, who heads the American Conservative Union which hosts the annual Conservative Political Action Conference, or CPAC. The two have a political business together.

It is perhaps unprecedented for a U.S. president or president-elect to speak directly with a leader of Taiwan, a self-governing island the U.S. broke diplomatic ties with in 1979.
In first comments apparently meant to downplay the significance of the call, Chinese Foreign Minister Wang Yi said Saturday that the contact between Taiwan’s president and Trump was “just a small trick by Taiwan” that he believed would not change U.S. policy toward China, according to Hong Kong’s Phoenix TV.

THIS IS FROM AN EBAY AD. I KNEW THESE WOULD BE COLLECTORS’ ITEMS

TRUMP NEEDS TO LEARN TO IGNORE FOUL-MOUTHED HACKS WHO ARE ONLY LOOKING FOR ATTENTION
“Just tried watching Saturday Night Live – unwatchable! Totally biased, not funny and the Baldwin impersonation just can’t get any worse. Sad,” Trump tweeted early Sunday morning.
The tweet elicited a near-immediate response from Baldwin, who tweeted back, “Release your tax returns and I’ll stop.”

WHAT A BACKSTABBING LITTLE PRICK
South Carolina Republican Sen. Lindsey Graham confirmed Thursday he is in the process of reaching out to former “Gang of Eight” members to help him craft legislation that would protect immigrants who illegally entered the country as children from deportation.

And so a new media narrative has just been launched: If Donald Trump succeeds, it will be because President Barack Obama gave him such a great push. How else to explain the near simultaneous publication of two articles on Friday, one in Politico, the other at FiveThirtyEight.

On the campaign trail, Trump slammed Nabisco for moving jobs to Mexico, vowing to never eat another Oreo even though he loves them.
After Donald Trump negotiated a deal to keep nearly 1,000 Indiana-based Carrier jobs from moving to Mexico, Nabisco is now looking to open the lines of communication with the president-elect.

How Trump Could Create Millions Of Energy Jobs

A 2015 study found the coal industry lost 50,000 jobs from 2008 to 2012 during Obama’s first term. During Obama’s second term, the industry employment in coal mining has fallen by another 33,300 jobs, 10,900 of which occurred in the last year alone, according to federal data. As a result, many ex-coal miners are unemployed and Appalachian “coal country” has faced very real economic devastation as a result.

In his boldest challenge yet to incoming President-elect Trump, outgoing President Obama is demanding that Congress more than double its spending on illegal immigrants to nearly $4 billion, a bigger increase than he sought for the care of war veterans, Secrets has learned.

Karma: Jeep Pulling Castro’s Ashes Breaks Down During Funeral Procession, Soldiers Have To Push Vehicle
How symbolic for the break down of everything in Cuba because of him.

Comments Off on Sunday, Snowy Sunday

From our friend Mindful Webworker.

U.S.—Reports from around the nation Thursday indicate that millions of American citizens were still reeling from the revelation that a prominent Christian couple holds a historically Christian position.

“We’re not saying people can’t be Christians,” a Seattle woman said in a Facebook comment. “This is a free country, after all. But when Christians decide to actually have Christian beliefs about things—I’m sorry, that’s just too far.”

A man in Denver agreed, stating that he prided himself on his deep appreciation of and support for freedom of beliefs and religious tolerance, “so long as Christians don’t publicly hold opinions I find disagreeable.”

“It’s almost as if they take the Bible seriously or something,” he added, shaking his head.

This revelation comes on the heels of a national Gallup poll released earlier this week indicating that over 95% of Americans agreed with the statement, “Christians are allowed to practice their beliefs, as long as everyone agrees with them.”

The House Select Panel on Infant Lives has released a list of nine criminal and regulatory referrals against abortion providers and/or fetal tissue procurement companies made as a result of their investigation into the illegal practice of selling aborted baby remains for profit.

The list was released in advance of an expected vote today on H. Res. 933, which would cover the expenses of the Select Panel’s work through the end of the year.

Comments Off on The House Select Panel on Infant Lives

Comments Off on Dear Future Mom

Filed under Down Syndrome, Life Issues

Dearest came up with this saying yesterday.  I. Love. It.