When the sun rises on Wednesday, our next president will be known. In all likelihood it will be a greedy, lying crone that has raised bribery and extortion to a whole new level. There is a lot of talk about indictments of some of her co-conspirators, but that will likely be a pipe dream. If Obama doesn’t pardon the lot of them, as he already has for nearly 1,000 convicted felons, she’ll do it herself. She’d have no qualms or regrets as long as she gets what she wants.

With 5 Days Left=> Morally Bankrupt Hillary Clinton Releases Ugly, Vicious, Nasty Attack Ad
This is one of the nastiest ads in US political history.
She cherry-picked several Trump quotes over his 30 year public life and squeezed them together along with several unconfirmed allegations of sexual abuse and made an ad out of it.
Trump was right to call her “nasty.”

TRUMPS ADS ARE UPLIFTING… HERS ARE DESPERATE

‘CORRUPTION’ — This Is Donald Trump’s Hardest-Hitting Ad Of The Election
“The Clintons,” the ad opens. “From dead broke to worth hundreds of millions.”

Hillary eats soul food to boost lagging black turnout
The black voter turnout in the key state of North Carolina is down 16 percent in early voting. It’s a similar situation in Florida, where black voters heading to the polls in person has decreased from 25 percent in 2012 to a current rate of 15 percent, despite expanded early voting opportunities

DON’T THEY KNOW THEY HAVE TO VOTE DEMOCRAT? THEY HAVE NO CHOICE. INDEPENDENT THINKING IS NOT ALLOWED.

Fox News: FBI ‘Actively and Aggressively’ Probing Clinton Foundation Corruption, ‘A Lot’ of Evidence
“There’s an avalanche of new information coming in every day, some of it from WikiLeaks, some from emails,” Baier said. “The agents are actively and aggressively pursuing this case.”
Baier said that the investigation is being led by the white collar crime division, the public corruption branch of the criminal investigative division of the FBI.

Moody’s Predicts YUGE Win For Clinton
The Moody’s election forecast, which has accurately predicted each and every U.S. election since 1980, projects a comfortable total of 332 Electoral College votes for Clinton.

THEY SHOULD ALSO BE MAD THAT A WORTHLESS CLOWN LIKE YOU USED BLATANT FRAUD TO SLINK INTO OFFICE IN THE FIRST PLACE.
Florida GOP Prepares Lawsuit Against Alleged Voter Fraud in Democratic County

The GOP is accusing election officials of illegally opening tens of thousands of mail-in ballots in Broward County, Florida before they have been legally canvassed. The county is 2-to-1 Democratic.
Fox News interviewed Florida GOP Chairman Blaise Ingoglia at a Donald Trump rally on Wednesday, who insisted the election officials were not given permission to open the ballots. He sent a warning letter to the Florida Supervisor of Elections.
Update: It appears there will be no need for a lawsuit after Broward County officials offered a swift response.
THEY ACCOMPLISHED WHAT THEY WANTED

Wikileaks: HRC’s Campaign Has Power Over When PBS Airs Its Stories

Your tax dollars at work
Via Wikileaks — The Hillary Campaign calls the shots at PBS.
Public television and radio stations like PBS and NPR got $445 million from the government in 2012.
Via Wikileaks documents:

https://www.youtube.com/watch?v=k-n102EAYPA
“Decades of lies, cover-ups and scandal have finally caught up with Hillary Clinton,” the ad’s voice-over begins.
Hillary Clinton is under FBI investigation again after her emails were found on pervert Anthony Weiner’s laptop,” it continues, though the FBI has not said that it found any of Clinton’s own emails on the laptop, nor has it yet disclosed whether any of the emails are new.
“Think about that. America’s most sensitive secrets, unlawfully sent, received and exposed by Hillary Clinton, her staff, and Anthony Weiner,” the ad continues. 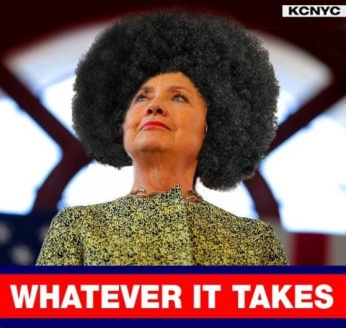 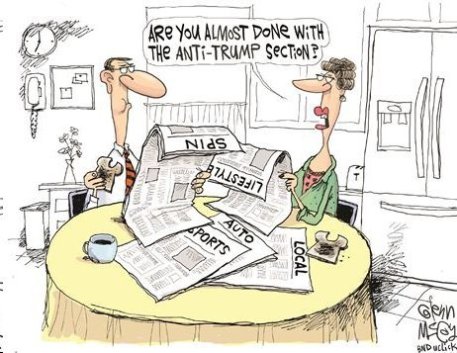 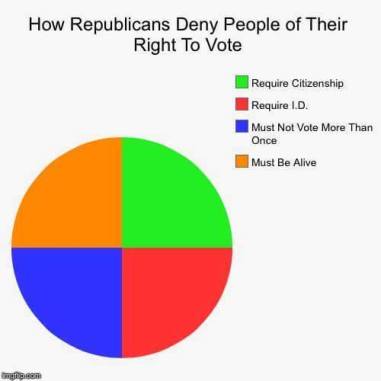 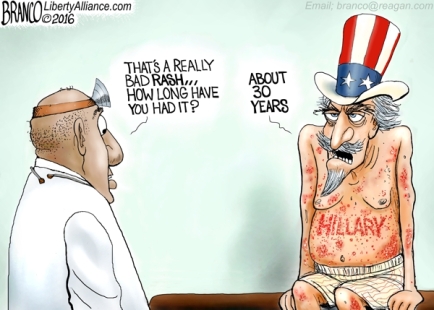 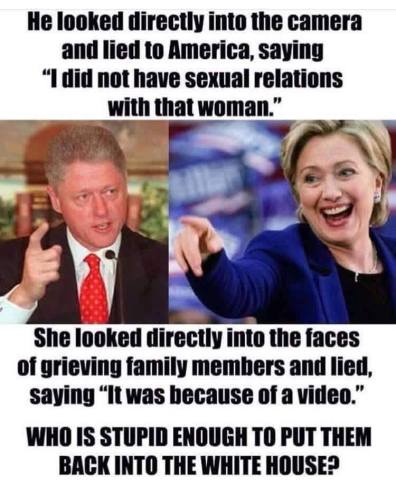 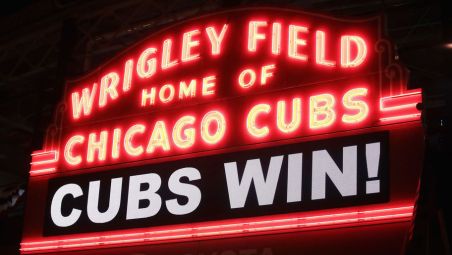 CHICAGO, IL – OCTOBER 30: The marquee above Wrigley Field shines after the Chicago Cubs beat the Cleveland Indians 3-2 during Game Five of the 2016 World Series on October 30, 2016 in Chicago, Illinois. (Photo by Scott Olson/Getty Images)

AIN’T IT THE TRUTH? 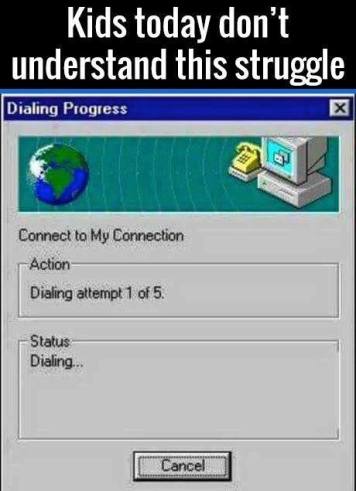 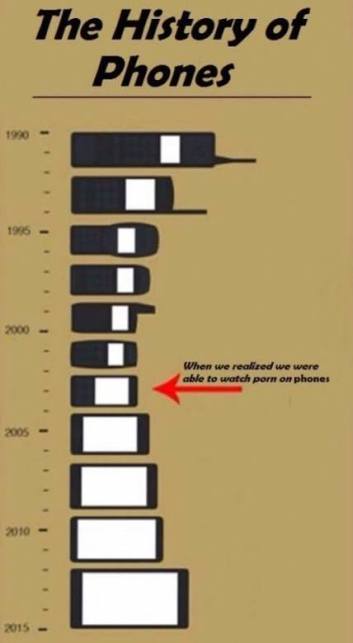 My grandfather was a sometimes stern man who was not given to show melancholy. So it was of some notice that day in August of 1969 when he came through the kitchen door from work. He looked like he was about to cry (something I never saw him do). The Chicago Cubs had fallen out of first place for the first time since opening day. He lived and died with them, as did millions of other hapless Cubbie fans. He shook his head in dismay and spoke words I remember to this day:
“They wouldn’t be the Cubs if they didn’t break your heart.”

The ride was enjoyable all summer long and offered a welcome distraction from the unspeakable tragedy about to occur. Like many other fans I never really let go and allow my emotions to rule. Until last night. They started out quickly and by the 8th inning were ahead of Cleveland 6-3. Then the Indians scored 3 runs and suddenly it was tied. “Oh, here we go again,” I thought. Such a magnificent season was destined to end in heartache. After a short rain delay they pushed 2 runs across in the 10th inning and had to survive a desperate rally in the bottom of the frame to finally end the longest championship drought in American sports history, 8-7.

It was a season for the ages. Going 103-59 in the regular season before twice fighting back in the playoffs from a 3 games to 1 deficit in best-of-seven series to reach the summit. Generations of fans finally had their dreams fulfilled.

It’s been a very long day for me. Up all night, the papers from Chicago were two hours late getting here, and by the time I got home from breakfast with my kin I was completely spent. Up again after a hard nap, the full impact of this historic day has not yet been fully realized. I never thought I’d live to see it.

The 108 year wait is over! Chicago erupts as the Cubs win the World Series by one run after extra innings and a rain delay in epic five-hour Game Seven against the Cleveland Indians
They were crowned champions in the tenth inning, beating the Cleveland Indians 8-7
The Cubs pulled through Game 7 after a nail-biting game that was tied in the eighth inning
Historic franchise capped off their unbelievable comeback on Wednesday night at Progressive Field
Bill Murray, LeBron James, John Cusack and Charlie Sheen were in the stands to watch the action unfold
Cubs last won the World Series in 1908 and the Indians in 1948 – the two longest droughts in MLB history

Cubs’ win means just as much for baseball as it does for Chicago
To say this World Series, and in particular this Game 7, qualified in that regard is like saying the city of Chicago partied a little bit late Wednesday night into early Thursday morning.
In historic terms, this was a game for the ages, no matter how it played out. Incredibly, it lived up to that hype and more, starting with an atmosphere that was beyond electric, with Cubs’ fans crashing the Progressive Field party in staggering numbers, all the way to early-morning finish.

JOE MADDON CAME HERE AS MANAGER TWO YEARS AGO. HE PROMISED A CHAMPIONSHIP. HE DELIVERED.

WANNA BET HE’LL INVITE THE TEAM IN FOR A PHOTO-OP BEFORE HE GETS DRAGGED FROM THE WHITE HUT, SO HE CAN PRETEND HE’S NOT A WORTHLESS LOSER? 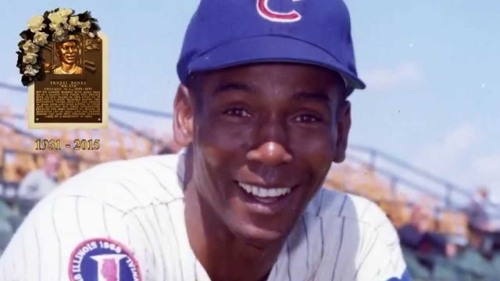 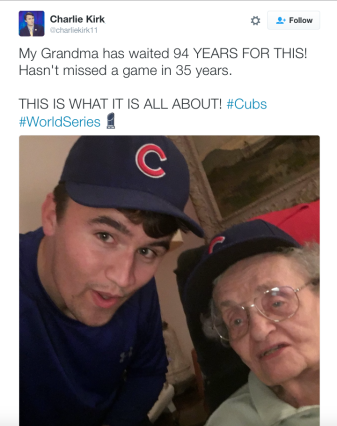 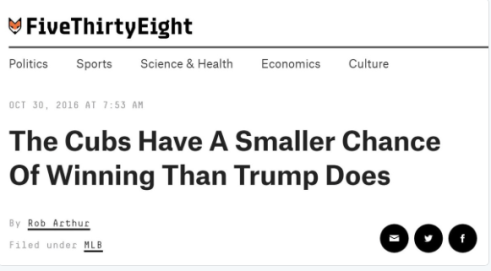 Pray for our upcoming election

Prayer is our most powerful tool and, for most of us, the only real means we have to effect the outcome in a positive way.

Form our consciences according to the Gospel so that we may both vote and act for the Kingdom of God.

And bless us with an honest election and the best rulers possible at all levels of government.

Comments Off on Pray for our upcoming election