HRC is a pathological liar

Remember the easily debunked sniper fire story she told in 2008?  She blamed that faux pas on “sleep deprivation.”  You can watch it here:

Yesterday, she claimed to have been in NYC on 9/11.[1]  Except, she wasn’t.  It boggles my mind that this bubble-brained liar thinks she can invent crap like this when her life has been so PUBLIC.  She was First Lady during the Bosnia incident and Senator from New York on 9/11.  Sheesh.

The following paragraph is from a friendly-to-Clinton article titled “What Trump and Hillary did on 9/11” [September 10, 2016]. The bolding is mine.

Clinton, meanwhile, was down in Washington, at her home on Whitehaven. She had CNN on as she talked on the phone with her legislative director when the first plane hit. Then the second. By the time she got to the Capitol, the Pentagon had been hit by a third plane. Capitol police were evacuating Senate office buildings. She dialed her daughter, who was in New York. She dialed her husband, who was in Australia. She and other senators received a briefing at the Capitol police station early in the evening. And after “a day indelibly etched in my mind,” and as nightfall approached, Clinton joined congressional colleagues on the steps of the Capitol, standing next to some of her fiercest political opponents, singing “God Bless America” with tears in her eyes. [2] 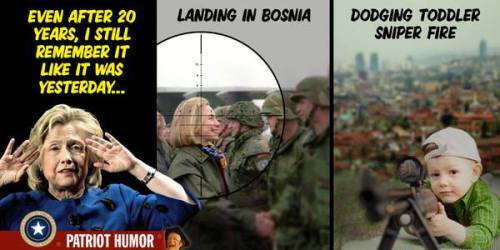 One response to “HRC is a pathological liar”