In 10 days America will walk the Green Mile. It will be painful.
I WAS IN THE MIDDLE OF DOING THIS POST WHEN A COUPLE YOUNG IDIOTS CANVASSING THE NEIGHBORHOOD FOR THE DEMOCRAT CANDIDATE FOR CONGRESS RANG MY DOORBELL. I THINK THE GIRL WAS READY TO CRY WHEN THEY LEFT.

HERE, HAVE A CUP OF ANARCHY
Surely enough, Kerlin and fellow tabling participants were met with remarks by students such as “f*uck the white male patriarchy!” and “I can’t believe you guys are actually people.” Shortly following, students began to behave aggressively.
“A student came up to us and made a claim about how Trump wants to get rid of “his people,” Kirk Breiner, a sophomore and tabling participant told The Pitt Maverick.

THE END WAS NEVER REALLY IN DOUBT
The millions of votes that have been cast already in the U.S. presidential election point to an advantage for Hillary Clinton in critical battleground states, as well as signs of strength in traditionally Republican territory.
The strong early-voting turnout by those likely to support Clinton – registered Democrats, minorities, and young people among others – could leave Donald Trump with virtually no path to the 270 electoral votes needed for victory.

UK Reporter Calls CNN “Clinton News Network – Your Coverage Is Totally Biased”
CNN host: That’s CNN, you’re calling us the Clinton News Network.
Katie Hopkins: That’s exactly correct.
CNN host: Why?…
Katie Hopkins: I will say having sat in the Republican convention and having watched your coverage, it is completely biased. And I think Trump is doing a great job. And I think what we saw from him today over… You’ll also find polls that find 70% of individuals find Clinton to be utterly distasteful. I find her abhorrent to look at. Her little smile there does nothing for me.

THIS IS A SURE PICKUP FOR THE DEMOCRATS. THE STATE IS HEAVILY DEMOCRAT (DON’T I KNOW IT) AND KIRK IS NOWHERE NEAR A CONSERVATIVE. HE’S IN THE McCAIN, GRAHAM, COLLINS, AND FLAKE WING OF THE PARTY.
DUCKWORTH’S ONLY QUALIFICATION WAS SHE LOST HER LEGS IN IRAQ. NOTHING ELSE. AT LEAST HER POLITICAL CAREER COST HER SOMETHING, UNLIKE JOHN “LIVESHOT” KERRY.
Rep. Tammy Duckworth (D-Ill.), seeking to unseat GOP Sen. Mark Kirk in Illinois, invoked her family’s military service while answering a debate question.
Kirk was offered a chance to rebut. “I’d forgotten that your parents came all the way from Thailand to serve George Washington,” he said.
Duckworth’s mother, Lamai, is Thai, but her late father, Franklin, was a Marine veteran whose family roots in this country trace to before the American Revolution. Tammy Duckworth was severely wounded in the Iraq War, losing her legs while serving as a helicopter pilot.

DAMN CONSTITUTION WROTE BY A BUNCH OF RACIST OLD WHITE MEN WHO HATED BLACKS. RODNEY KING! TRAYVON MARTIN! MICHAEL BROWN!
Baltimore State’s Attorney Marilyn Mosby has found herself on the ropes after a disastrous series of failures during the Freddie Gray trials, but she’s apparently not ready to give up on her efforts to put police officers in jail.
In one measure which would take effect under her plans, police would be severely limited or completely barred from opting for a bench trial rather than a full hearing before a jury

THEIR GREED IS PATHOLOGICAL. THEY CAN NEVER HAVE ENOUGH TO SATISFY THEMSELVES.
And in a 2011 memo to the review team, former presidential aide Doug Band openly boasted about how he’d raised millions for the foundation from his business clients — and even more for Bill Clinton personally.
At that point, Teneo had raised $8 million for the foundation and $3 million in paid speeches for Bill. Plus, Band boasted, it had also set up “more than $50 million in for-profit” business deals for the ex-president, with contracts worth $66 million more.
And that doesn’t even include loads of “in-kind” freebies, like vacations and private jets.

Hillary BUSTED Holding Closed Door Meeting with Florida Elections Director in Possible Voter Fraud Scheme
More proof of a RIGGED SYSTEM and likely voter fraud taking place right before our eyes in the critical state of Florida. There have been several reports that Broward County Election Director Brenda Snipes has met with Hillary Clinton behind closed doors and several sources of claim to be coming forward with pictures soon

LYING AND CHEATING COME AS NATURALLY AS BREATHING TO THESE PEOPLE
Anyone with any political knowledge is aware the best chances for Hillary Clinton in Florida come from two specific counties, Broward and Dade. It is not coincidental that both counties continue to be the historic nucleus of multiple voting irregularities.
This year is no different. In a recent series of events Broward County is at the epicenter of another voting malfunction. However, this one might not be a mistake, it might be by design. The essential outline of the current year concern surrounds a scheme to present double voting to benefit Hillary Clinton.

Colin Powell Says He Will Vote For Hillary Clinton

Oh what a shocker. Powell endorsed Obama in 2008, Obama in 2012 and now Hillary Clinton in 2016. Not surprisingly, this jackass still thinks he’s a ‘Republican’ according to the article. He’s about as much a Republican as Harry Reid is.

EVERYTHING HE ACCOMPLISHED WAS DUE TO THE BUSH PRESIDENTS. HE TURNED HIS BACK ON A FELLOW VIETNAM VETERAN BECAUSE OBAMA WAS BLACK. F**K HIM.
Despite Powell’s support for the Democratic presidential nominee in the last three cycles, he insisted in September 2015 that he was still a Republican.
“I’m still a Republican because I believe in a strong defense, because I believe in the entrepreneurial spirit that is so typical of the Republican Party in the past,” Powell said at the time.

Pandering Hillary Takes A Backseat To Mooch At NC Rally
LISTEN, GIRLFRIEND,THE NEGROES DON’T LIKE ME. I NEED YOUR HELP. THEY’RE SO STUPID THEY’LL BELIEVE ANYTHING YOU TELL THEM.
Michelle Obama: “Hillary Doesn’t Play”…
Bill nods in approval. 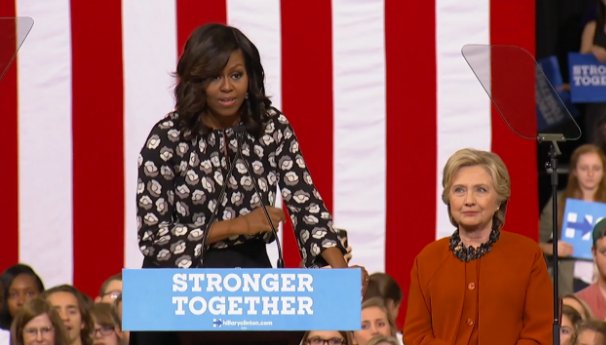 “Seriously, is there anyone more inspiring than Michelle Obama?” Hillary Clinton asked the 11,000 who packed into a basketball arena here, making Clinton’s first joint appearance with Obama the largest indoor event of her entire campaign.
The crowd seemed to agree with the candid assessment. And Clinton spoke first, in a subtle acknowledgment that she was not the main event less than two weeks before Election Day.

WHITE MAN DISRESPECTED ME ABOUT MY TUNES. THAT CALLS FOR A BEATDOWN.
The principal was beaten Monday by an 18-year-old student, whose lawyer said is acting out because his mother died of a brain aneurysm in his arms last year.
The student, Luis Penzo – who was arraigned on charges of second degree assault and held on $5,000 bail – was in the hallway blasting music from his headphones when Tossman asked him to turn it down.
Penzo not only refused, police say he cold-cocked the administrator and continued to punch him after he was down
Students at the troubled business-themed campus – which houses four different schools – complained the place was out of control.
“They should just shut the school down,” said Dashawn Reid, 15.
She pointed to an arrest on Oct. 7 of a student who came to school stinking of weed and carrying a gun in his backpack.

SUBTLETY IS LOST ON THESE NEANDERTHALS
Members of the Young Conservatives of Texas at the University of Texas at Austin held an affirmative action bake sale Wednesday. The bake sale, located in the West Mall area of the campus, drew a large crowd of protestors and critics.
In a press release regarding the event, the club explains that they held the bake sale on campus to “bring attention to the absurdity of giving preferential treatment to individuals based on race, ethnicity or gender.”

Bill Clinton’s long-time mistress Dolly Kyle candidly spoke about her relationship with the former president, revealing his sex-addiction as well as Hillary’s temper and “shocking” body odor, the Daily Mail reported Wednesday.
Kyle, 68, had a decades-long affair with Bill Clinton before and during his marriage to Hillary. Their relationship suddenly ended in the 1990s after he threatened to “destroy” Kyle if she discussed their extramarital affair with the press.
During Kyle and Bill Clinton’s time together, he often referred to Hillary as “The Warden” and complained that his sex life was “over” after moving in with his future wife.
Bill’s former fling claimed the Clintons’ desire for a child was politically motivated, the Daily Mail reported.

PRESIDENT CLINTON WANTS TO BRING ANOTHER HALF MILLION OF THESE ANIMALS HERE.
NOW, DON’T YOU FEEL BETTER?
An Iraqi asylum seeker who confessed to raping a 10-year-old boy in a swimming pool, claiming it was a “sexual emergency”, has had his conviction overturned.
Following the attack, the accused rapist returned to the pool and was practising on the diving board when police arrived, after the 10-year-old raised the alarm with the lifeguard.

Pic Of The Day: Hillary Reacts When Asked How She Feels On Her Birthday

SHE’S POCKETED HUNDREDS OF MILLIONS, THE ELECTION IS FIXED; WHAT’S NOT TO BE HAPPY ABOUT?

DNC Suing RNC Because Trump Claims The Election Is Rigged

HOW DARE THEY ACCUSE US OF CHEATING JUST BECAUSE WE’RE CHEATING? HOW ELSE ARE WE SUPPOSED TO WIN?
The Democratic National Committee has filed a suit in the U.S. District Court in New Jersey against the Republican National Committee because Donald Trump continues to insist that the election is rigged against him. The DNC alleges that the RNC has not done enough to reprimand Trump for claiming that the election is rigged, and seeks to have the court hold the committee in civil contempt as well as levy sanctions.

With a name like mine, I just felt compelled to include this video from a user named Hicock45, where he demonstrates how to carve a pumpkin with a pair of Colt .45s.
Instead of the traditional carving knife, Hickok used a pair of nickel-plated Colt .45 single-action revolvers. “I understand a lot of you are still trying to carve your pumpkin with a knife,” he said. “I really just don’t understand that. I mean, knives are just too big.
“I think a long, long time ago cowboys got that one figured out.”

Here are some costumes that will make you say: Gee, I wish I had thought of that!

THIS IS CHILD ABUSE! OH, THE HUMANITY!