FIRST OFF, HAPPY BIRTHDAY TO ONE OF MY DEAREST FRIENDS IN THE WHOLE WORLD, TING. U R THE BEST!
What a beautiful weekend it was. Saturday, the Winnebago 8th graders put up a valiant but unsuccessful effort to upset the powerful Stillman Valley team. In Sunday’s first softball contest Big Sis’ team came from behind, scoring two runs in the bottom of the final inning to triumph 5-4. The second game saw Miss Karissa’s Thunder team vanquish the girls from Team Arby’s by a score of 23-10 (it was 23-1 before the manager put in all substitutes). The cherry on the Sunday sundae was the Green Bay Slackers falling to the Minnesota Vikings 17-14 Sunday Night.
Meanwhile, back in the world I choose not to live in, the Enslaved Press is in full protective mode for Hillary and she and Barry have once again proven that elections take precedence over dead Americans and waves of terror attacks. Two were perpetrated by an immigrant from Afghanistan who, sadly, has not yet met Allah and cashed in on his 72 vestal goats.
Three Terror Attacks In One Day: It’s Time For Liberals To Step Aside

Let’s recap yesterday’s round of cultural enrichment.
First, we had a terror attack in Seaside Park, New Jersey. The pipe bomb was set to go off next to thousands of racers running by in a 5k charity race for Marines. Had it not been for a late start, we’d be talking about #NewJerseyStrong and the deaths of hundreds of our fellow Americans.
Second, a Muslim Jihadist went on a stabbing rampage at a mall in St. Cloud, Minnesota. He went around asking people if they were Muslim and if they answered no, he stabbed them yelling “Allahu Akbar”. He’s instructed to do this by Allah.
Then, at around 8:30pm, an IED went off outside an apartment building in NYC sending shrapnel into the bodies of 29 people. A second IED, made from a pressure cooker, was later found with a cell phone attached two blocks away.

St. Cloud ISIS Terrorist Identified: DAHIR ADAN – Knifed 9 People – Born in Somalia
Afghan immigrant Ahmad Khan Rahami is wanted by authorities in connection to bomb attack in Chelsea. Dahir Adan from Somalia went on a stabbing rampage on Saturday at a St. Cloud mall
ISIS CLAIMS ST. CLOUD MALL STABBER WAS ISLAMIC STATE SUPPORTER!
Nine people were injured Saturday at Crossroads Mall in St. Cloud, Minnesota when a Muslim attacker went on a stabbing rampage.
The Muslim was shouting, “Allahu Akbar!”
HIS NINE VICTIMS WILL SURVIVE THEIR WOUNDS.
HAPPILY, THIS HUMAN TRASH DID NOT.
He was shot dead by an off-duty officer.

CAPTURED: FBI arrest ‘armed and dangerous’ Afghanistan-born man, 28, wanted for Manhattan and New Jersey bombings in shootout that left two cops injured
Ahmad Khan Rahami, 28, was taken into custody Monday morning in Linden, New Jersey
Witnesses say he was found sleeping in the entryway of a bar and the owner called police
When police arrived on the scene, Rahami started shooting and he struck two officers – one in the hand and one in the vest
The man wanted in connection for two bombings and an attempted bombing in New York and New Jersey this weekend has been arrested after a shootout with police.

A bar owner in Linden, New Jersey called police around 11am Monday morning, after finding 28-year-old Ahmad Khan Rahami sleeping in the entryway of his business.

When police arrived on the scene, Rahami brandished a weapon and started shooting at the cops – injuring two. Officers eventually shot Rahami in the right shoulder and he was taken from the scene in an ambulance, handcuffed to a stretcher.

Police released Rahami’s picture Monday morning, saying he was wanted for questioning in connection to the Saturday bombings in New York City and Seaside Park, New Jersey, as well as the foiled bombing of the Elizabeth, New Jersey train station on Sunday. Law enforcement say it was fingerprints left behind on an unexploded pressure cooker bomb in Manhattan that led them to Rahami. Twenty-nine people were injured when another bomb placed a few blocks away was detonated Saturday night.

White House After NY/NJ Bombings, MN Mass Stabbings: “We Are In A Fight With ISIS – A Narrative Fight”

I CAN’T WAIT FOR THIS ASS TO GET OFF THE STAGE
Obama: “Personal Insult” To Me If Black People Don’t Get Out And Vote For Hillary To Preserve My Legacy

SPEAKING TO THE CONGRESSIONAL NEGROID CAUCASIANS, HE NEVER ONCE MENTIONS HILLARY OR ANY OF HER ALLEGED ACCOMPLISHMENTS. IT’S ALWAYS ALL ABOUT HIM… ALWAYS

President Barack Obama said Saturday night he will take it as a “personal insult” if the African-American community fails to turn out for the presidential election and encouraged black voters to support Democratic candidate Hillary Clinton.
“I will consider it a personal insult, an insult to my legacy if this community lets down its guard and fails to activate itself in this election,” Obama said with a stern look and booming passion. “You want to give me a good send-off, go vote.”

BERNIE BUST: Only 150 turn out at Sanders Ohio stop for Hillary
If the Ohio crowds for one of Hillary Clinton’s top surrogates are any indication, it’s time to panic.
Bernie Sanders drew only 150 fans at a rally in Akron on Saturday, according to WKSU.

EVIDENTLY HIS DISCIPLES DISAPPROVE HIS SELLOUT TO HILLARY FOR A $600,000 VACATION HOME ON THE SHORE.

First Lady Michelle Obama received chants of “four more years” at a rally Friday in Virginia on behalf of Hillary Clinton, leading her to try to quiet the crowd.
“It is so hard to believe that it is less than two months to Election Day and that my family is almost at the end of our time at the White House,” Obama said to cries of “No!” from the crowd in Fairfax. “Yeah. It’s almost time.”
IN THE NAME OF ALL THAT’S HOLY, PLEASE GET OFF THE STAGE!

WHAT MISERABLE EXCUSE FOR A HUMAN BEING WOULD MISS THEIR CHILD’S FIRST DAY OF SCHOOL? A CLINTON, THAT’S WHO.
Wow, Hillary must be in BIG trouble for her daughter to skip her kid’s first day of school.
Kids be damned, Chelsea Clinton opted to miss her kid’s first day of school in order to stump for her sick mom’s failing campaign.
I guess she’ll have another “first day of pre-school” right?
Wrong.
Her mother should have INSISTED that Chelsea go and be with her daughter on such a monumental day.
However, I guess when it’s “All hands on deck” desperation, kids fall by the wayside. 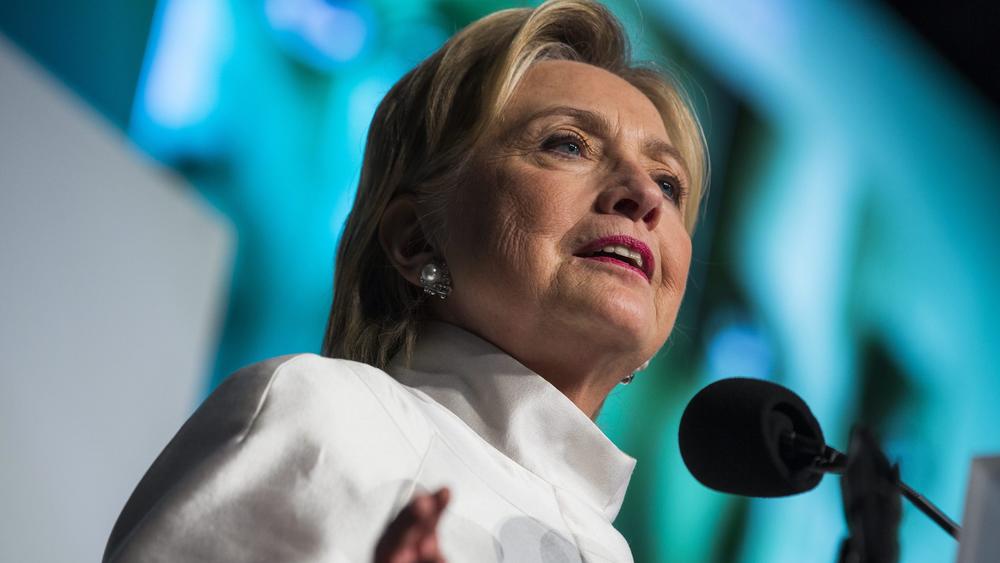 TRUMP OWNS COAL COUNTRY, BUT HE CAN’T OVERCOME THE 120% VOTER TURNOUT IN THE VOTER FRAUD HOTBED OF PHILADELPHIA.
(ON A SIDE NOTE, SOME OF THE RACE AGITATORS MASQUERADING AS PROFESSIONAL FOOTBALL PLAYERS PLAN TO MAKE ASSES OF THEMSELVES BY NOT STANDING FOR THE NATIONAL ANTHEM BEFORE THE EAGLES’ GAME WITH THE CHICAGO BEARS TONIGHT.)
Clinton’s strategy is focused firmly on the eastern part of the state. Obama won 85 percent of the vote in Philadelphia in 2012, and Clinton has her sights set on coming as close as she can to his performance there while also outperforming Obama in the four suburban counties bordering the city.
Almost 2 million votes, or fully one-third of the 5.67 million presidential votes cast in the state in 2012, came from Philadelphia plus Bucks, Chester, Delaware and Montgomery counties. It’s a region replete with moderate Republicans struggling with the decision about whether to support Trump.

Democratic vice-presidential candidate Sen. Tim Kaine (D., Va.) said Sunday that Donald Trump was inciting violence against Hillary Clinton when the GOP candidate suggested the pro-gun-control Clinton’s bodyguards should be disarmed.
“I think that her bodyguards should drop all weapons. They should disarm … I think they should disarm immediately,” Trump said on Friday. “Take their guns away, she doesn’t want guns. Let’s see what happens to her.”

James O’Keefe Introduces ‘Emotional First Aid Kits’ for Social Justice Warriors
O’Keefe introduced the new “must-have” campus accessory at the University of Houston, ahead of a sold-out appearance on Monday evening by Breitbart News tech editor Milo Yiannopoulous, who is already “triggering” the politically intolerant.
The emotional first aid kits are designed to address the trauma of any “microaggressions” a student or professor might encounter if they cannot reach a “safe space” in time, and include a “genderless” baby blanket, earplugs, and Hershey’s Kisses (though the Project Veritas team ran into a serious snag when the chosen candies came prepared in American flag wrappers).

4 responses to “The Weekend Wrapup”