Trump visited the Great Faith International Ministries church in Detroit
While speaking to the congregation, he said that African-Americans are ‘God’s greatest gift to our nation’
His visit comes amid criticism that he has yet to appeal to black voters
Trump promised if elected president that he would provide better education for children who live in impoverished black neighborhoods
Trump visited Dr. Ben Carson’s childhood home with Omarosa Manigault and chatted with the current owner outside before departing the city

OUTREACH TO THE BLACK COMMUNITY BY REPUBLICANS HASN’T WORKED FOR 50 YEARS. THE FACT IS,THEY’VE BECOME ACCUSTOMED TO LIFE ON THE LIBERAL PLANTATION AND APPARENTLY DON’T MIND BEING FED A LITANY OF PLATITUDES WITH NO SUBSTANCE. EVERY ELECTION CYCLE THEY’RE PANDERED TO BY DEMOCRATS WHO DON’T REALLY WANT THEIR VOTE, BUT COULD NOT SURVIVE WITHOUT IT.

DONALD TRUMP RECEIVES STANDING OVATION at Detroit Great Faith Ministries Church
Donald Trump ended his 14 minute speech with a Bible verse.
I’d like to conclude with a passage from First John, Chapter 4: You know it! You see most groups I speak to don’t know that. But we know. If you want we can say it together. “No one has ever seen God but if we love one another, God lives in us and his love is made complete in us.”

Trump Tells Black Church: ‘We Need a Civil Rights Agenda for Our Time’

“For centuries, the African American church has been the conscience of our country,” Trump told the congregation as he spoke briefly during the service.
The Republican nominee said African American churches have “lifted up the soul of our nation” and led the civil rights movement.
He said he wants leaders to help heal the nation by providing “a greater platform to the black churches and church goers.”

“I will always support your church — always — and defend your right to worship,” he added. “I hope my presence here will also help your voice to reach new audiences in our country and many of these audiences desperately need your spirit and your thought.”

DEMOCRAT PROTESTERS Try to Bust into Detroit African American Church to Get at Trump
About 50 Democrat protesters tried to break into the back door of the Detroit Great Faith Ministries Church on Saturday.

They wanted to get at Trump.

Sharpton On Trump’s Remarks At Black Church: “Insult To Our Intelligence”

Al liked Trump well enough when he was asking him for money or favors.
TRUMP DARED TALK TO THE SHEEP SHARPTONGUE HAS BEEN FLEECING FOR DECADES.
“It’s an insult to our intelligence,” Sharpton said, “to come to us acting as if just saying that we should all come together… is going to bridge that gap.”

Trump’s AWESOME answer to the question, ‘WHO is GOD to you?’
“Well I say God is the ultimate. You know you look at this? Here we are on the Pacific Ocean. How did I ever own this? I bought it fifteen years ago. I made one of the great deals they say ever. I have no more mortgage on it as I will certify and represent to you.

‘SHUT IT DOWN’: Reuters cuts only news video feed as black pastor thanks Trump

Reuters was reportedly the only news service to be providing video coverage of Donald Trump’s visit to a Detroit church on Saturday, and a mystery voice could be overheard ordering someone to “shut down” the feed before the event had concluded.

Bishop Wayne T. Jackson was presenting Trump with a prayer shawl and two Bibles when a hushed voice off camera could be heard saying, “I’m shooting this, I don’t care what…”

Moments later, the same voice said “Shut this down?”

“Shut it, yeah,” another voice said.

Just then the camera begins to shake as if it’s being moved and the feed goes black.

I WISH WITH ALL MY MIGHT THAT TRUMP WOULD HAVE A CHANCE. THE CYNIC IN ME SAYS IT WILL NEVER HAPPEN.
THE MEDIA HAS MANIPULATED THE NEWS ALMOST FROM ITS GENESIS. WHAT THEY DON’T REPORT TELLS YOU MORE THAN WHAT THEY DO REPORT.
Hillary called “Robert Byrd” her “MENTOR!” And they call Trump Racist??!! 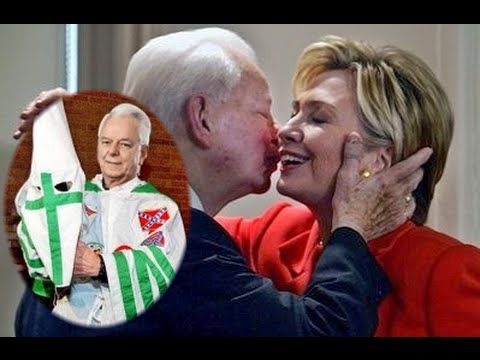 You think G_d would vote for baby slaughterers selling the pieces?

Did Reuters “shut it down” when Obama’s, Father Pfleger said: “America is the greatest sin against God” or when he told Chicago police union president to ‘go to hell’

Did Reuters “shut it down” when Obama’s, Mullah, Screwy Louis Farrakhan said: “The God who taught me calls the white man the skunk of the planet earth” or when he called jews ”“bloodsuckers,” or when he said: “Judaism a “gutter religion”
MY ONLY SOLACE IS IN THE FACT IT WILL BE ALL OVER SOON