These DNC Guys Seem So Legit 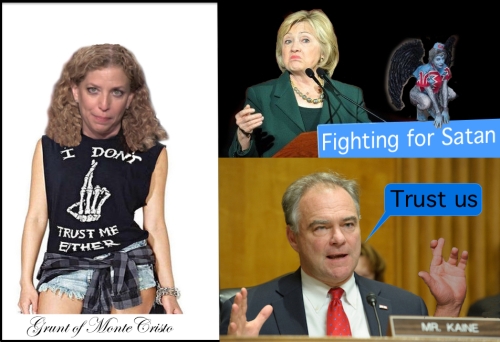 Pelley joined CBS This Morning Monday to promote the interview, and co-host Norah O’Donnell brought up an unaired portion of the interview. “The specific part of your interview that is drawing interest this morning is her answer to the DNC email scandal, she acted like she was not familiar with what was going on,” said O’Donnell.

Pelley claimed Clinton looked “surprised” by his question. “I got to tell you, if I’m any reader of body language, I’ve known Secretary Clinton for 25 years, and I was struck, as I was reading the emails to her in the interview, her eyes widened as if to say, what is this about? What are you talking about? She seemed genuinely surprised,” Pelley said.

Once again a member of the press does his part to cover up a scandal surrounding Lying Hillary Clinton. First of all if he has known her for 25 years as he claims, he knows that she is a world class liar. Surely someone that has told more lies than Satan the Devil would be able to look shocked when confronted with something she does not want anyone to suspect she was a part of.

But I am sure he knew what he was saying was nearly as big a lie as the one Hillary espoused. I am quite sure that she would not go on a so-called news show without being fed the questions in advance so that she could cut off any thing that might be damaging to her. That is why she does so few news conferences.  Please read the rest here.

Comments Off on These DNC Guys Seem So Legit