Some Images Are Time Sensitive

Some images need to be posted while they’re still topical. Otherwise, they become irrelevant and have no value. Like political promises.

Added by Grunt: “Dreams From My Godfather.” 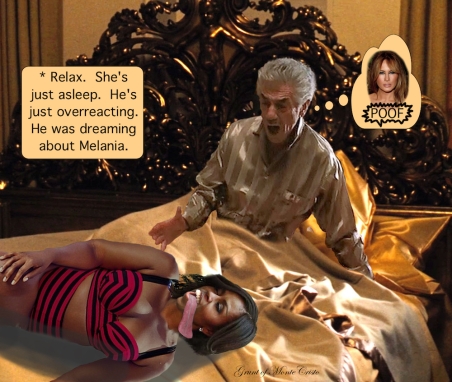 The Donald set a record with a 76-minute stemwinder of a speech last night, basically promising a chicken in every pot and thrilling the crowd with all manner of promises.
On cue, Donald Trump brings the house down with the best speech of his political career

On Clinton’s time as Secretary of State, Trump said, “America is far less safe and the world is far less stable than when Obama made the decision to put Hillary Clinton in charge of America’s foreign policy.”
Trump made efforts to appeal to constituencies who might not traditionally vote Republican – Bernie Sanders supporters by fixing their “biggest single issue,” bad trade deals, and to the LGBTQ community by protecting them from the “violent and foreign and hateful ideology” that seeks to come here in ever greater numbers.
In a moment of candid humility, Trump expressed sincere gratitude for the evangelical support without which he couldn’t have won, even though “I’m not sure I totally deserve it.”
“It is time to show the whole world that America is back, bigger and better and stronger than ever before … I will be your champion.”

Heavenly Joy sings ‘America the Beautiful’ at the RNC

APPARENTLY LIEBOWITZ HASN’T BEEN ABLE TO AFFORD A RAZOR SINCE HE QUIT HIS JOB
“The Republicans appear to have a very clear plan for America. They articulated it throughout the convention. No. 1, jail your political opponent. No. 2, inject Rudy Giuliani with a speedball and a Red Bull enema. And then No. 3, spend the rest of the time scaring the holy bejesus out of everybody,” Stewart joked on Thursday’s episode of The Late Show

It appears that part of Uygur and Stone’s intense exchange revolved around the latter’s alleged role in the prostitution scandal that embroiled former New York Gov. Eliot Spitzer in 2008, one that eventually led to his resignation.
HATEFUL PUKE SINK WIGGER, WHO CRASHED AND BURNED AT CNN, HAS BEEN REDUCED TO HOSTING HATEFUL YOUTUBE VIDEOS
STRONG LANGUAGE WARNING

IF YOU’RE DRAWING FLAK,YOU’RE OVER THE TARGET
FROM SEE-BS
Donald Trump offers dark vision of America in GOP convention speech
On the final night of a convention filled with mishaps — of the plagiarism, non-endorsement varieties — Donald Trump painted a bleak picture of America, even as he officially accepted the Republican party’s nomination for the presidency.

MOST OF THE BLM PROTESTERS IN CLEVELAND WERE WHITE. THERE’S A REASON FOR THAT. THE 500-STRONG CLEVELAND POLICE FORCE WAS BOLSTERED BY 2,500 FROM 12 DIFFERENT STATES. THERE WERE ALSO 3,000 FEDERAL OFFICERS THERE FOR SECURITY.
BLM STATEMENT:
“The terrifying vision that Donald J. Trump is putting forward casts him alongside some of the worst fascists in history.
“Black people and our allies have unequivocally demanded a new path forward for safety in our communities, one that involves real accountability for police.

Networks on Trump: A ‘Dark Speech’ From a ‘Vengeful’ ‘Demagogue’

On NBC, Tom Brokaw allowed that “some” will see Trump as on a “white horse who will lead them to some kind of sanctuary and then pull the drawbridge up.” But he sneered, “Others looking in are going to see someone they will only think as a demagogue of some kind.”

YOU MEAN LIKE BILL CLINTON SEEING A CAMERA AS HE WAS LEAVING RON BROWN’S FUNERAL?
“We…sometimes look for our leaders to be compassionate — to console us during national tragedy. We saw President Obama in Dallas a week or so ago. We haven’t seen that Donald Trump. Is this a man that can cry? Can he emote? Can he wrap his arms around the country in times of crisis?” Holt later repeated his question on whether the elder Trump can cry.

Matthews somehow theorized, “When you get back to the angle, the edge, it’s about big cities with large minority populations. You go back to that old thing of bashing Washington, D.C., the old Marion Barry days, bashing Baltimore and Chicago, those city names evoke minorities.”
AND WHO RUNS EVERY ONE OF THOSE SHITHOLES, GENIUS?

FROM THE WASHINGTON COMPOST
Donald Trump: The candidate of the apocalypse Belligerent and erratic, Mr. Trump nevertheless has a serious chance to win in November. In his acceptance speech, he sought to enhance his political prospects the only way he knows how: by inflaming public angst, so as to exploit it.

MSNBC Warns ‘Viewer Discretion Advised’ Before Showing Anti-Hillary Campaign Buttons
Maddow cautioned snowflake-viewers with a trigger-warning: “You may find it uncomfortable. And so, you may not want to look at this stuff,” referring to slogans like “Hillary for prison” and “Vote no to Monica’s ex-boyfriend’s wife in 2016”

THERE IS NO PROOF BUTCH WORE A BUTTON THAT SAID: I CAN LICK ANY WOMAN IN THE PLACE

Peter Thiel Comes Out at RNC as Gay Republican – Gets STANDING OVATION
PayPal cofounder Peter Thiel steals the show at RNC Convention.
Thiel came out as gay and the RNC gave him a standing ovation.

WE OWN THE GAYS! THEY CAN’T HAVE THEM!
The reaction from some liberal journalists on Twitter was to lash out with hatred. Remember, these are the same people who regularly call conservatives “haters.”

Obama Marks The End Of Ramadan With Eid Al-Fitr Celebration At The White House
The victim card was the main course.
THE ASSHOLE FARTETH ORALLY

BARRY’S PERSONAL BITCH DOING HER IMAM’S BIDDING
“Our Constitution protects the rights of religious communities to build places of worship free from unlawful interference and unnecessary barriers,” said Principal Deputy Assistant Attorney General Vanita Gupta, head of the Justice Department’s Civil Rights Division. “The Department of Justice will continue to challenge unjustified local zoning actions around the country when they encroach upon this important civil right.”

Public have no right to know who is funding Hillary Clinton’s $60 million coronation at Democratic National Convention, party says in bid for secrecy on donors
Hillary Clinton will be crowned the Democratic presidential candidate in Philadelphia next week at event costing estimated $60 million
Democrats have a $15 million credit line with the city in case their fundraising falls short
Independent journalist is fighting for names of the donors to be made public before convention begins
But host committee tells court hearing that donations should be kept secret

Granholm: Clinton Supported TPP Under Obama Because ‘She’s Going to Do What Her Boss Tells Her’
CNN host: ‘That’s leadership?’

Hillary Clinton surrogate Jennifer Granholm defended Clinton Friday for supporting the Trans-Pacific Partnership while she worked for President Obama because she wouldn’t have stayed in the Cabinet otherwise and “she’s going to do what her boss tells her.”
However, Clinton flip-flopped once she was running for president to prevent Sanders from getting to her left on the issue.

THE CONVENTION IS OVER. NOW COMES TIME TO DIGEST WHAT HAS COME TO PASS. MONDAY THE TOILET WILL BACK UP AND THE POOP WILL RUNNETH OVER. WE’LL BE HERE TO REPORT FOR YOU, SO STAY TUNED.

Comments Off on Convention Wrapup