The Ends Justify the Means

Democrats will do anything to win. Illegal, unethical, tawdry, downright dirty. It doesn’t matter, just as long as they win. And they do. By any means necessary.

Thu September 4, 2014
A former rising star in the Republican Party, former Virginia Gov. Bob McDonnell was red-faced and sobbing Thursday after a jury convicted him and his wife on multiple counts related to influence-peddling while he was in office.

IT’S RARE THAT THIS COURT RENDERS A VERDICT BY AN 8-0 COUNT.
The U.S. Supreme Court on Monday tossed out the bribery conviction of former Virginia Governor Robert McDonnell, who was found guilty of accepting thousands of dollars in cash and gifts
A jury convicted him in 2014 on a host of federal bribery charges for accepting $175,000 in money and luxury goods from a Virginia businessman who wanted help getting two state universities to conduct research on a diet supplement.

McAuliffe: Supreme Court Can’t Stop Restoration of Felon’s Voting Rights
McAuliffe pledges to issue 206,000 felons right to vote individually if he has to

THE ELECTION WAS SHOWN TO BE A COMPLETE SHAM AFTERWARD. NO MATTER, WHAT’S DONE IS DONE.
The court granted a request made by Republicans to expedite their lawsuit against McAuliffe, which argues that the governor did not have the right to restore rights to the large group in a single executive order. Rights were previously restored in a case-by-case manner, after felons individually petitioned the state and penned a letter to the governor explaining why they deserved to not only have the right to vote, but also have rights such as the ability to serve on a jury or run for office.

LEST WE FORGET… WE’VE SEEN IT BEFORE
TOM “THE HAMMER” DeLAY, AS HOUSE MAJORITY WHIP, WAS A REAL PAIN THE THE DEMOCRATS’ ASSES.
AN ABSOLUTE HACK NAMED RONNIE EARLE WENT TO THREE… COUNT ‘EM… THREE GRAND JURIES TO GET A HALF-BAKED INDICTMENT. NO EVIDENCE, JUST ENOUGH TO FORCE HIM TO STEP DOWN.
Tom DeLay Exonerated by Final Court in Texas; Liberal Media Virtually Silent

The left-wing news media deliberately ignored the story of his total legal exoneration earlier this month. Contrast this with the multiple, lengthy front-page articles than ran for years gleefully covering the progression of the politically motivated attacks on him.

When DeLay was indicted in 2005, most people around the country did not understand how politically motivated the left-wing Travis County District Attorney was. Now that sitting Texas Governor Rick Perry is being prosecuted by current DA Rosemary Lehmberg, a convicted drunk driver, the targeting by that Democrat-controlled office is finally coming to light. The Austin-based office badly overstretched going after the popular governor, and now its history of corrupt prosecutions are all coming to light.

DeLay achieved a respectable 95.39 percent rating in Congress from the American Conservative Union after serving 21 years. He became a born-again Christian in 1985. This combined with moving up to the powerful position of Majority Whip followed by House Majority Leader explains why the left came after him so viciously. He is far from a criminal, but rather a kind and decent man. He and his wife founded a Christ-centered foster community called Rio Bend near Richmond, Texas. They fostered three boys themselves.

Eleanor Clift: Obama Justice Department Let Tom DeLay ‘Off the Hook’ in Spirit of Bipartisanship
GRACELESS, SOULLESS, CLASSLESS
Clift also implies that DeLay was let “off the hook” mainly because of the big-hearted Obama Administration in the spirit of bipartisanship:

The case against DeLay probably wasn’t a slam dunk, and politically, the Obama administration, struggling to retain some of the bipartisan and post-partisan luster that carried Obama into office, probably doesn’t have the stomach to send a former House Republican leader to the hoosegow.

Clift signs off with yet another shot at DeLay by suggesting that he was somehow lucky to get his case dropped so he shouldn’t be celebrating:

I only wish DeLay would refrain from doing a victory lap in the media. He did a lot in Washington that he shouldn’t be proud of, and he’s just another guy getting off from charges of white-collar crime.

WHY ARE DEMOCRAT WOMEN SO UGLY?

“A mockery of justice. Totally politically motivated.”
“Imprison all Republicans… hard labor and no benefits — no mail, no phone, no nothing.”
The right likes to claim that Obama set race relations back, but in my opinion, he has helped move race relations forward by forcing the racists out of the woodwork and exposed the virulent bigotry that still infects too many Americans.

LIKE THE GUY ON THE INFOMERCIAL SAYS:
‘BUT I’M NOT STOPPIN’ THERE!’

DAYS BEFORE THE 2008 ELECTION A CORRUPT (IS THERE ANY OTHER KIND?) DEMOCRAT PROSECUTOR INDICTED TED STEVENS ON CORRUPTION CHARGES
U.S. drops corruption case against ex-Sen. Stevens Wed Apr 1, 2009 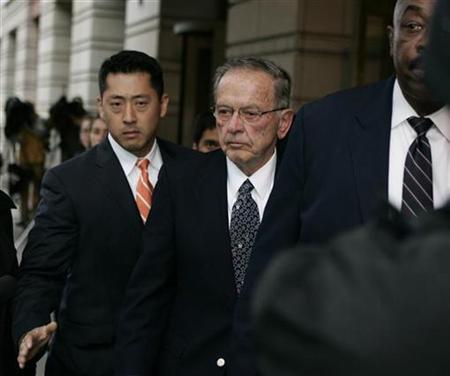 Allegations of prosecutorial misconduct had delayed the sentencing of Stevens, who was narrowly defeated in the November election by Mark Begich, a Democrat. The case was cited as one reason for the loss.

Stevens had faced up to five years in prison on each count, but under federal guidelines was likely to get much less prison time or just probation if he had been sentenced.
Stevens’ defense attorneys had sought to overturn the conviction, citing a whistleblower complaint by an FBI agent who said another agent and prosecutors improperly concealed evidence helpful to Stevens.

U.S. prosecutors are required to fully disclose evidence to defendants.

Comments Off on The Ends Justify the Means

Kennedy: You Are Now Free to Murder Babies in Texas

Stunning victory for abortion rights as Supreme Court strikes down restrictions which shut clinics in Texas by 5-3 – and a dozen state’s laws are likely to follow
Texas law required clinics to meet hospital-style standards for clinics to stay open and was said by state to be about protecting women’s health
Pro-choice groups claimed they were simply an attempt to stop constitutionally-protected access to abortion
Biggest court action on abortion in years and first time in nine years Supreme Court has ruled on abortion
Court ruled 5-3 against Texas, which means the vacancy on the bench left by the death of Anton Scalia would not have affected the outcome
Justice Anthony Kennedy joined four liberal justices in majority opinion authored by Justice Stephen Breyer
Hillary Clinton hailed ‘victory for women in Texas and across America’ but angry Republicans said it was attack on women’s health and states’ rights

A DAY OF JUBILATION FOR THESE COWS
FOR THE UNBORN BABIES, NOT SO MUCH

Abortion: Do It for Spite!

In response to the Supreme Court’s abortion ruling today, the folks at The Daily Show couldn’t help but do a little end zone dance.

I’m old enough to remember when liberals insisted that abortion was an unfortunate, even tragic, necessity. This was the inspiration behind Bill Clinton’s promise to make abortion “safe, legal and rare.”

Now, apparently, abortion is the kind of thing one should do out of spite.

Actually, it’s even worse than that. This tweet is aimed at men — and I don’t mean people who simply identify as men, but actual biologically male from birth men. They are saying — yes, yes, in “jest” — that “Bros” should go out and “knock up” women because that will really stick it to those stupid conservatives in Texas. Not only is the abortion a trivial instrumentality for political payback, so is the woman who has to go through an invasive surgical procedure.

MSNBC’s Thomas Roberts didn’t try to hide his delight over the Supreme Court ruling Monday striking down a law requiring abortion clinics to meet the same standards as ambulatory surgical centers, using part of his interview with Wendy Davis to gush over her famed pink sneakers.
“You ran for governor after the filibuster that, as I said, it skyrocketed you because of those pink sneakers,” Roberts said. “I’m not sure if you’ve put those in any type of Hall of Fame in Texas, or if they’re still somewhere in your closet, but does this make you want to get back into Texas politics again?”

“I am never stepping away from Texas politics, whether I’m in office or not in office,” Davis said. “I’ve continued to work very hard to make sure that gender equality is advanced in this country. Of course, reproductive rights are an incredibly important part of that, and I could not be happier in this moment talking to you about the decision that we received from the Supreme Court today.”

The Trials and Tribbilashuns of the Mooch

Poor soul; trapped in that awful, cold,unfeeling House that was built by slaves. It is a testament to her grit and determination that she can soldier on the way she does, along with her two little darlin’s and Mama Robinson in tow.

There are a few things that make her miserable existence there a little more bearable. Like traveling all over the world on a bunch of white devils’ money.

Mixing with royalty! Sasha and Malia touch down in Marrakesh with their mom to meet Moroccan Princess Lalla Selma on latest leg of their African tour
Education for girls is the central theme of the first lady’s trip, which also includes a stop in Spain after Morocco
On Monday, Mrs Obama urged teens in Liberia, one of the world’s poorest countries, to keep fighting to stay in school
Meryl Streep will accompany Mrs. Obama in Marrakesh, Morocco, on Tuesday for another conversation with girls
The first lady is traveling with her mother and daughters Malia, 17, who recently graduated high school, and Sasha, 15

WHY THE HELL DOES SHE ALWAYS LOOK SO ANNOYED?

Michelle Obama and her two daughters were in Morocco on Tuesday celebrating Ramadan, the Islamic holiday that commemorates the first revelation of the Quran to Muhammad.

While dining with the royal family, the trio broke bread and participated in the ritual known as Iftar, an evening meal that is conducted after a day of fasting.
The celebration of Iftar requires a prayer to Allah before receiving the meal.

“O Allah! it is for thee that I observe fast and it is with Thine blessing that I break it.”

Tone Deaf: Michelle Obama Wears $1,750 Dress In One Of The Poorest Countries In World

Unfortunately, Mrs. Obama did not seem to grasp the seriousness of the issue. The Washington Free Beacon reported that the First Lady wore a $1,750 Proenza Schouler floral wrap dress upon arriving in Marrakech. The average income per year for a Liberian is $370. In Morocco, paying for the designer garb would gobble up 60 percent of the average citizen’s yearly income.

Data from the World Bank shows Liberia’s average income is the fourth-lowest in the world. It makes little sense why Obama would waste taxpayer dollars to flaunt such opulence in a place of such abject poverty.
FLAUNTING IS WHAT SHE DOES
The Daily Mail estimated the full trip would rack up quite the bill as well: her airplane costs $11,684 per hour to operate. This will amount to $300,000 for the flights alone— then add on the First Lady’s security, staff and fashion expenses. Mrs. Obama’s trip to South Africa and Botswana in 2011 cost taxpayers $424,142, according to The Daily Mail.
“The average Liberian family lives on less than two dollars a day, and about 90 percent of the country has no access to electricity. During the Ebola epidemic, entire communities were devastated, infrastructure crumbled, and most schools closed for six months, which left girls particularly vulnerable. Teen pregnancy rates increased, and when schools did re-open, attendance rates dropped, in part because in Liberia, pregnant girls are strongly discouraged from attending school.”