The IG has determined that Hillary has been lying about her secret server all along.
Her body-woman,Humjob,is stonewalling the investigation.
There is much hand-wringing over how these investigations are hurting her efforts to bully her way into the White House.
Make no mistake…these are not scandals…they’re acts of criminality.
After pissing all over the Viet Nam war dead,Barry has moved on to whine about the poor Japanese who were victims of American aggression.
He’s whining about The Donald possibly upsetting the climate hoax deal with the other socialist nations.
Bernie is eager to debate Trump before the California primary,since Hillary is too busy shucking and jiving about what a sleaze she is.It will probably be the largest crowd he’s ever gotten to babble for.
I’m sincerely hoping when Bernie starts huffing about his socialist crap Trump points out the old bastard never had a job until he was in his 40’s and,like most democrats,has never run a business and has no clue how the economy works.
Turns out Perky Katie Couric did a ham-handed hatchet job in her piece on attacking the Second Amendment through the media’s patented selective editing.
I’m posting a short video of a fat bearded dude dancing in a speedo.It would be wise if you had a glass of something with a high alcoholic content if you watch it.
I think my mouse is going to hell because it won’t copy what I highlight to paste without great effort.After I take my finger off the left button the shaded area disappears.Hoping that’s all it is.May have to call tech guy.

Thou Shalt Not Think 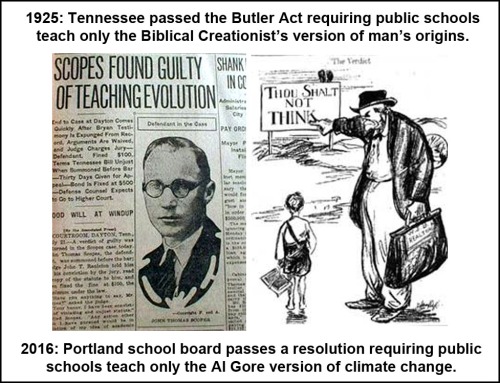 May 17, 2016: The Portland Public Schools board unanimously approved a resolution ordering every school in Portland to “abandon the use of any adopted text material that is found to express doubt about the severity of the climate crisis or its root in human activities.”

The resolution also directs the superintendent and staff to develop an implementation plan for “curriculum and educational opportunities that address climate change and climate justice in all Portland Public Schools.”

One commenter to the Portland Tribune story said, “I have never seen a case for homeschooling more clearly put forward. This is further proof that public schools are not interested in education, only political indoctrination.”