This meeting of the White Privilege Society will now come to order.The reading of the minutes from the last meeting will be waived,due to the secretaries absence.He’s a paramedic and was called to Utopia University to administer CPR to a Snowflake who,upon seeing “Trump 2016” scrawled in chalk on the sidewalk fell to the ground,convulsing and mumbling incoherently.She had to be rushed by whaambulance to her Safe Space for a group hug with other affirmative action devotees and trust fund juveniles who all try to get into politics so they don’t have to do anything useful.They refer to John Kerry as The Godfather.
We are faced with cries of racism on a daily basis.While there has been some level of animus and distrust between the races for a very long time it has been ramped up a hundredfold since they feel they got one of “theirs” elected president.The incidences of blacks running from,attacking and trying to kill policemen.With every instance of a black suspect killed by police the paid anarchists stand at the ready to riot,burn and loot…..just for fun and profit.

Spreading the lie that police are out to get you, police being reticent to defend themselves or to affirmatively enter more dangerous situations is a recipe for disaster and crime explosion.

A new FiveThirtyEight analysis of crime statistics out of Chicago reveals the recent spike in gun violence in the Windy City is directly related to the release of a video that shows the police shooting of Laquan McDonald and the protests, activism and reforms that followed shortly thereafter. The analysis provides strong evidence in support of the idea that Chicago is experiencing its own “Ferguson Effect” — a theory that says the recent increase in violent crime is the result of rank-and-file officers taking a less proactive approach to policing due to increased anti-police sentiment.

Family says boy, 16, fatally shot by cop had scrapes with law but no major trouble (Chicago)
THERE WAS ANOTHER INSTANCE YESTERDAY OF A “YOUTH’ RUNNING FROM AND SHOOTING AT POLICEMEN. BAD IDEA.
But she still can’t understand how her 16-year-old nephew ended up shot to death after allegedly confronting a Chicago police officer with a gun Monday evening.

“Once again, we’re looking at environment, this community. How some of these young boys are just plagued with certain influences,” Winters said Tuesday. “But not to this extent, by no means.”

Escalante said Loury had “prior contact” with police and that police considered him a documented gang member.

His family said Loury was the oldest of five children, an aspiring rapper who attended Community Christian Alternative Academy in the West Side’s Lawndale neighborhood. 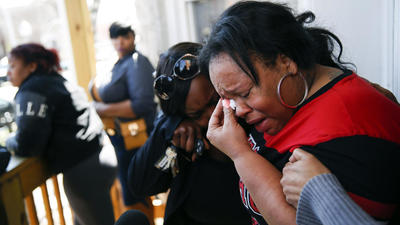 THERE IS A VERY LARGE FAMILY LIVING IN OUR URBAN CENTERS….THE NUFFIN FAMILY. MAYBE YOU’VE HEARD OF THEM…DINDU,DONNO,DINSEE AND AINTELLIN.

LAKE HALLIE, Wis. (AP) — A police officer fatally shot a developmentally disabled woman inside a western Wisconsin Wal-Mart after she refused to drop a hatchet she had grabbed from a shelf, authorities say.

WE NEED MORE HATCHET CONTROL!!
THIS WOMAN RUSHED A POLICE OFFICER WITH A SKULL-AXE. SHE ALSO HAD A SWORD UNDER HER SHIRT. MAYBE SHE JUST WANTED TO AXE HIM A QUESTION.

Wisconsin girls soccer team targeted by Trump wall chants walks off
BELOIT IS 10 MILES NORTH OF ME IN ROCK COUNTY. ELKHORN IS IN WALWORTH COUNTY, JUST EAST
A girls high school soccer team in Wisconsin walked off the field after they were the target of Donald Trump chants from people on the sideline, according to WISC-TV.

It was the Beloit Memorial girls varsity soccer team, which took on Elkhorn Area High last Thusday. Reportedly there were kids on the side of the field yelling “Donald Trump, build that wall,” toward Hispanic and African American players.

According to The Now, kids who chanted will be punished, though school officials have not stated what type of punishment they will face.
NO DOUBT THE KIDS WILL BE FORCED TO UNDERGO SENSITIVITY TRAINING
APPARENTLY “ILLEGAL” IS NOW A RACIAL SLUR

I’D BET A THOUSAND DOLLARS THIS IS A COMPLETE LIE
“They said the Black Lives Matter movement was retarded. They told us to go back to Africa. They saying the ‘N’ word, calling us ‘n**gas,’” an emotional Bartlett said in the three-minute video that has garnered more than 150,000 views since last Thursday.

“You’re not going to make me feel uncomfortable at a school I pay $22,000 to go to,” Bartlett said in her video. “I went down there, and I confronted all of them. Y’all want to have an open discussion and an open forum about black people? Let me pull up a seat.”

A white student at a predominantly Hispanic and black Long Island high school says he was targeted for punishment over his race — punched, hit with a chair and repeatedly called “cracker” and “white boy” — while administrators did nothing to protect him.

Lawyers for Giovanni Micheli, now 23, aim to convince a federal jury that their client was singled out as a “minority” in Brentwood High School and then told by school officials, most of them white, to either “project more self-confidence” in order to stem the beating and berating — or leave.

AFTER THE MEETING,WE’LL BREAK INTO SMALL GROUPS TO DISCUSS HOW TO COPE WITH OUR WHITE PRIVILEGE AND WHAT WE CAN GIVE THE MINORITIES WHO ARE LESS FORTUNATE JUST SO THEY’LL FEEL BETTER

One response to “The Daily Raacciisssss”