On April 3, 2016, Hillary Clinton made the absolutely extraordinary statement that “The unborn person doesn’t have constitutional rights.”

It’s not extraordinary that she thinks the unborn can be slaughtered with impunity.  That’s just the Democrat Party Line.

What’s extraordinary is that she referred to the unborn as PERSONS.

The entire abortion argument is predicated on the idea that fetuses are PROPERTY, NOT PERSONS.

Until Roe v. Wade, the civil rights movement consisted entirely of shifting segments of humans from the category of PROPERTY (women, slaves, criminals, employees) to the category of PERSONS (living, human beings with equal rights under the law).

Abortion is the sole, shameful example of our nation moving a segment of our population in the other direction. 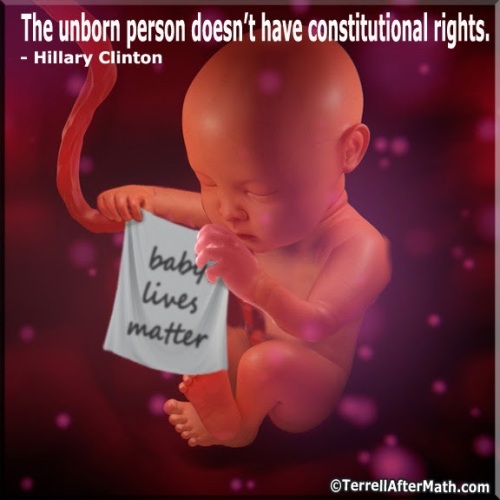 It should terrify us that a major political figure and presidential wannabe has stated publicly that the unborn are, in fact, PERSONS who she believes have no right to protection under our laws.

The nation’s founders believed that rights are granted equally by God to all His human children.

Progressives believe that rights are the property of the elite to give or withhold as they see fit.

This is the basis for their support for abortion and for their attacks on the religious freedoms of Bible-believing Christians and Jews.

Watch a video clip of the Clinton interview:
http://www.lifenews.com/2016/04/03/hillary-clinton-on-abortion-the-unborn-person-doesnt-have-constitutional-rights/ 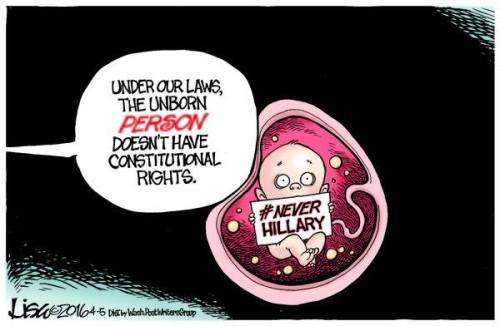 One response to “Unborn PERSONS?!”