Barack Even Sucks at Being a Manchurian President 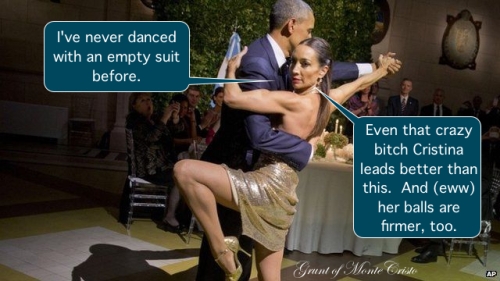 Check this out.  After his epic clusterfrack trip to Central and South America where he was mocked, worldwide, by EVERYONE for being ineffectual and unconcerned about the “Belgian 9-11” event in which at least two Americans were killed, Barry is PLAYING GOLF!

White House Dossier – Two days after returning from some kind of hiking expedition in Argentina and one day after spending a day doing nothing – at least publicly – at the White House, President Obama today is playing golf. He is at the Joint Base Andrews course playing with some of the usual junior White House aides.

WTFF???  At this point, I have to agree with CBC.  This moron can’t even pretend to be a decent Manchurian President:

Because no American leader, no matter how disinterested or callous, would allow the photos like the ones in this article to ever be taken unless the level of disinterest, callousness, incompetence or something else more sinister is at such a high level that it can’t be comprehended by people like me!

One response to “Barack Even Sucks at Being a Manchurian President”