First, thanks to Almighty God to hear our Chrissy is OK. She’s home resting and has been too weak to write. We will continue to pray until she is back with us. Also, prayers for Bluebird to get her furnace fixed soon. Where she lives in Wisconsin is no place to be without heat in February. Her only alternative is to huddle under a thick quilt with all her grandcats. They’ll keep her warm.

The South Carolina primary is Tuesday and The Bitch and The Bern are putting on a pathetic display of pandering to the plantation-dwelling, welfare-sucking  constituency that reside in that state. Word is, they’ve made their deals: Sanders is meeting with Rev. Al Sharptongue and promised to write off the $5 million in back taxes he owes. Hillary! has promised St. Skittles’ birth mammy NOT to try singing old Negro spirituals.

Hillary Clinton to Campaign with the Mothers of Trayvon Martin and Eric Garner
Sources say she will hone her message on systematic racism and criminal justice reform.

Senator Bernie Sanders won the New Hampshire primary last night, beating out Hillary Clinton with almost 60% of the vote. According to a report from Politico this morning, the loss is causing the Clinton campaign to re-focus their attention on racial injustice and criminal justice reform.

In addition, Clinton will be hitting the campaign trail with Sybrina Fulton and Gwen Carr, who are the mothers of Trayvon Martin and Eric Garner respectively. Both Fulton and Carr endorsed Clinton last month, citing their faith in Hillary’s stance on gun violence.

Hillary Clinton: Black Kids Are Being Shot for the Color of Their Skin

THE CONGRESSMAN WITH A PENIS FOR A HEAD: I AIN’T SEE NO JEW CRACKA ON THE BUS! HILLARY PROMISE US SOME REPIMICATIONS.
Sanders has noted that he participated in the March on Washington and was arrested while he was a student at the University of Chicago when he tried to desegregate housing at the university and the surrounding neighborhoods.

“To be very frank, I never saw him. I never met him,” Lewis said in response to a question about Sanders’s civil rights advocacy. He pointed out that he met both Clintons during the civil rights era.
http://www.breitbart.com/big-government/2016/02/11/3008706/ 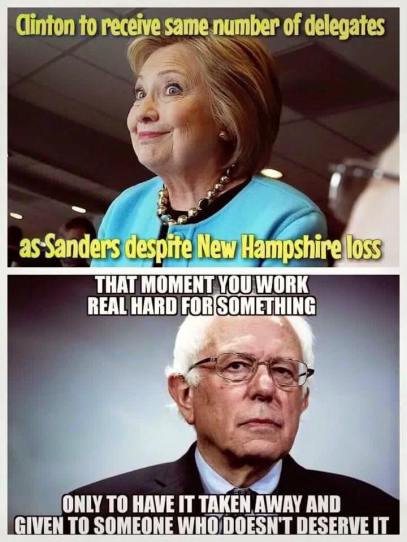 I THINK TOMORROW WOULD BE A GOOD TIME TO BREAK OUT SOME FUNNY; STAY TUNED

PJTV’s Scott Ott indulges in a little not-so-idle speculation about what awaits us.

Comments Off on Our 45th president’s first 100 days