Donald Trump may be making angry right-wingers stand up and cheer, but the fact is that the most enduring commitment he’s ever made in his lifetime has been to the Democratic Party.

While he was married to his first wife, Ivana, he engaged in a highly publicized affair with actress Marla Maples. He left Ivana and married Marla. Then he cheated on Marla with Melania. Then he left Marla and married Melania. He reportedly let Marla know he was leaving her by leaking the news to a New York newspaper and leaving the headline on the bed for her to find.

He has also bragged in writing about his affairs with married women.

“If I told the real stories of my experiences with women, often seemingly very happily married and important women, this book would be a guaranteed best-seller.” Donald Trump in “The Art of the Comeback”

Donald Trump claims to be a Christian, but his sexual antics, marital history, and 2015 statements about his faith and religious practices demonstrate he’s very far from being a true follower of Jesus Christ.

Seriously?! We’re supposed to believe Donald Trump has suddenly become one of us?!

A Saudi prince owns a minority share of Twenty-First Century Fox, the parent corporation of Fox News, via an investment firm.  MEGYN Kelly never posed for a photo with him. 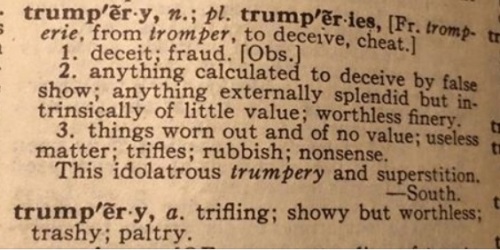 UPDATE: After Bob Vander Plaats publicly endorsed Ted Cruz, Donald Trump issued multiple tweets calling him a “phony” and a “bad guy.”  This is the same kind of vindictive, narcissistic behavior we have seen and despised in Barack Obama.

Comments Off on Shower Thoughts