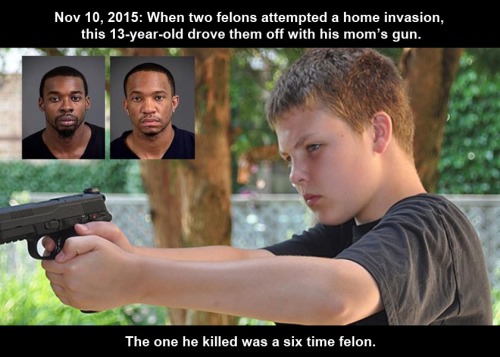 Gun control advocates claim to want to reduce violence, but the fact is that gun owners stop a lot of criminal mayhem every year.

And any time a citizen is able to shoot an attacker or hold a felon until the police arrive, it is likely that future crimes have also been prevented.

The thug who survived the above mentioned shooting was arrested.  Like his dead buddy, he had a long rap sheet … and a gun that he clearly had no legal right to carry.

NOTE: An anti-gun group cobbled together a bogus “study” to “prove” that guns are rarely used for self-defense. The Blaze explains why it was a load of donkey doo.

Comments Off on Guns protect the innocent

Filed under Crime, Self Defense