Must hear. Must read.

Gun control advocates claim to want to reduce violence, but the fact is that gun owners stop a lot of criminal mayhem every year.

And any time a citizen is able to shoot an attacker or hold a felon until the police arrive, it is likely that future crimes have also been prevented.

The thug who survived the above mentioned shooting was arrested.  Like his dead buddy, he had a long rap sheet … and a gun that he clearly had no legal right to carry.

NOTE: An anti-gun group cobbled together a bogus “study” to “prove” that guns are rarely used for self-defense. The Blaze explains why it was a load of donkey doo.

Comments Off on Guns protect the innocent

Filed under Crime, Self Defense

Shiites across the region called for angry protests and Iranians stormed the Saudi embassy in Tehran.

Saudi Arabia said, “Fine then!” and gave the Iranian envoy 48 hours to leave the country.

An official in the Obama administration put in Barack’s foreign policy two cents by repeating the Obama’s “talking can solve all problems” Doctrine.

From the BBC: The divide between Sunni and Shiite is the largest and oldest in the history of Islam. Although Sunnis and Shiites share many fundamental beliefs and practices, they differ in doctrine, ritual, law, theology and religious organization. The great majority (85% to 90%) of Muslims world-wide are Sunnis.

Afghanistan, India, Kuwait, Lebanon, Pakistan, Qatar, Syria, Turkey, Saudi Arabia and the UAE have Sunni majorities, but large Shiite communities exist in them. Iran, Iraq, Bahrain, Azerbaijan and, according to some estimates, Yemen have Shiite majorities.

Following the radical Iranian revolution of 1979, Tehran has actively supported Shiite militias and parties beyond its borders. Naturally, Sunni-ruled Gulf states have reacted by increasing their support for Sunni nations and movements.

But never mind all that!  OBVIOUSLY, the only thing standing between revolutionary Shiite Iran becoming bffs with conservative Sunni Saudi Arabia is a nice pot of tea and some sweet little cakes served on My Little Pony plates.

Just ask Barack the Great Negotiator … who personally limits his own open-minded “dialogue” with ideological enemies to snarky remarks, sweeping accusations, and finger wagging from behind his President’s “no interruptions will be tolerated” Podium.

THE JAWBONE OF AN ASS

Holy Scripture tells us that Samson took the skeletal mandible of an equine beast of burden and slew his enemies. At the tender age of about seven I once stood up in church and loudly and proudly recalled that he “whipped the shit” out of the Philistines. After a phone call from Pastor Bob to my granny, I had a pretty good idea how the Philistines felt. Who could have known that two millennia later a similar bone would be located in the skull of a lazy, incompetent but completely evil man illegally ruling over a once-great country that had turned away from God. We are now reaping the seeds of chaos and destruction because of the tyranny of a Godless majority. They feel nothing, know nothing and only worship the golden idol of a free lifestyle.
The shortest verse in the bible: “Jesus wept.”
This week’s pathetic joke: Obama wept.
I am in no way whatsoever equating the two. Although 96% of black peoples would.

Did anybody else notice when Barry was wiping the mentholated rub under his eye to produce false tears which finger he used? 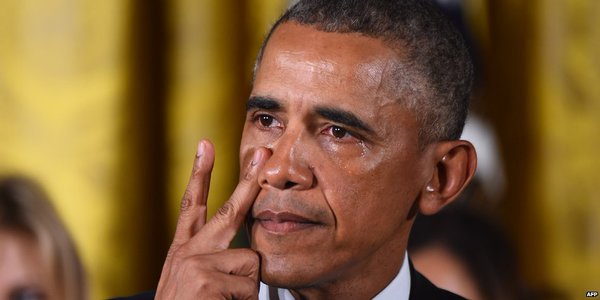 The tears of a clown
Like a kid who begs his parents for a PlayStation by crying uncontrollably in the electronics aisle in Target, Barack Obama believes that weeping and crying over “gun violence” should sway us to look the other way while he shits all over the Separation of Powers and the Second Amendment.

I have never been a big fan of “The ends justifies the means.”

And just so we’re clear, I don’t give a crap about “doing anything we can” to “reduce gun violence” if “anything we can” includes violating the Constitution, defying the will of the people, and bypassing the Legislative Branch.

Because the ends do not justify the means.
http://patriotretort.com/the-tears-of-a-clown/

How to fake cry with Barack Obama VIDEO
Want to learn how to fake cry like Barack Obama did today as his fascist gun control speech? It’s really quite simple. It’s all acting 101. Below is a video of how Obama faked crying that has since sent the media into a swoon. The same media who routinely mocked John Boehner for crying.

How to fake cry with Barack Obama VIDEO

You too can cry on demand, just like Barack Obama.

You know, with all the complaints about how ‘white’ the Oscars are, here is a perfect chance to give Obama an academy award for his dramatic fascist performance today. It’s win-win. The lily-white Hollywood leftists can finally give a black guy an award and claim they aren’t just like their KKK grandparents and racists.

So let’s review. Obama cries like a choomganger and the media fawns. John Boehner cried like a mentally unstable drunk and the media would mock. Talk about double standards.
http://www.fireandreamitchell.com/2016/01/05/how-to-fake-cry-with-barack-obama-video/?utm_source=twitterfeed&utm_medium=twitter&utm_campaign=Feed%3A+FireAndreaMitchell+%28Fire+Andrea+Mitchell%21+Exposing+Liberal+bias+cause+the+MSM+doesn%27t+have+to.%29

“Five years ago this week, a sitting member of Congress (Gabby Giffords) and 18 others were shot at at a supermarket in Tucson, Arizona. It wasn’t the first time I had to talk to the nation in response to a mass shooting, nor would it be the last. Ft. Hood, Binghamton, Aurora, Oak Creek, Newtown, the Navy yard, Santa Barbara Charleston, San Bernardino,” he said.

The president lamented the fact that he had to give his “routine” speech about how he respects the Second Amendment even while usurping it.

Obama: “I Know The Second Amendment – I Taught Constitutional Law”

Did you know that he also taught constitutional law? Yeah, he proudly mentioned that aspect of his former life when discussing his new executive actions on gun policy today. So, have no fear America; Obama is an authority on this subject; he knows what he’s talking about because he’s taught a class on constitutional law.
http://townhall.com/tipsheet/mattvespa/2016/01/05/obama-i-know-the-second-amendment-you-knowi-taught-constitutional-law-n2100257

THERE’S ONE TINY DETAIL HE’S OMITTING: HE NEVER TAUGHT LAW! HE WAS A GUEST LECTURER.
Of course, it makes no difference, but in the interest of historical accuracy,here’s the truth.
The Truth About Obama’s Teaching At Chicago Law School
How Obama got a job teaching law: It was a political favor. The law school actually had turned down his application to teach there.
◾ What his academic title was: Obama was a “lecturer,” never a “professor,” not even an “adjunct” professor. The distinctions between/among these academic titles are important. A lecturer (or “instructor”) is someone who is hired on a year-by-year basis, without going through a competitive rigorous screening or possessing sterling academic credentials.
◾ How other faculty members regarded him: They thought him lazy and unqualified.
◾ What he taught at the law school: Although he was hired to teach Constitutional Law, Obama instead taught Machiavellian power politics à la Saul Alinsky, the Marxist ideologue who dedicated his book on community organizing, Rules for Radicals, to the fallen evil angel Lucifer.
Chicago Law Prof on Obama: “The professors hated him because he was lazy, unqualified, and never attended any of the faculty meetings.”

Obama Cites Jesus in Push for Gun Control: ‘Greater Love Hath No Man Than This…’
STANDING ON THE BODIES OF THE DEAD IS PART OF HIS ACT

The president used the passage in reference to the death of Zaevion Dobson, a 15-year-old who was killed in Tennessee in December while protecting three girls from gunfire:
“He gave his life to save theirs, an act of heroism a lot bigger than anything we should ever expect from a 15-year-old. ‘Greater love hath no man than this, that a man lay down his life for his friends.’

“We are not asked to do what Zaevion Dobson did. We’re not asked to have shoulders that big, a heart that strong, reactions that quick. I’m not asking people to have that same level of courage or sacrifice or love. But if we love our kids and care about their prospects and if we love this country and care about its future, then we can find the courage to vote. We can find the courage to get mobilized and organized.”

Andrea Tantaros Says Obama Fake-Cried. But it Gets Better…

“America is forced to weep over Obama’s release of violent criminals into our communities – like the 121 illegal aliens who committed murders after they were released from custody by the Obama administration instead of being deported. And that doesn’t take into account the others we don’t know about.

“The whole world weeps waiting for American leadership in these troubled times as Islamic savages commit genocide against the Christians of the Middle East and terrorize innocent people in cities across the globe.

“Meanwhile, Obama wept as he blamed law-abiding patriots for the nation’s insecurity and sought to strip them of the Constitutional rights that generations of Americans shed blood to protect.

“Obama wept, while we all continue to weep for our country and the civilized world.”

“While announcing his new slate of gun control measures designed to pave the way for a national gun registration regime, President Obama welled up in a press conference on Tuesday. He’d spent nearly half an hour berating Republicans, American voters and the National Rifle Association for their supposed intransigence in failing to embrace his executive actions. Finally, he reached up to his eyes, rubbed at them, and as tears wet his cheeks, he stated, ‘Every time I think about those kids, it gets me mad. … We need voters who want safer gun laws, and who are disappointed in leaders who stand in their way, to remember come election time.'”

Uh, What: Obama Says Violent Felons Can Just Buy Guns Online
IT MATTERS NOT A WHIT, BUT THIS IS ANOTHER LIE

“A violent felon can buy the exact same weapon over the internet with no background check, no questions asked”? No, Mr. President, violent criminals can’t just go online and buy firearms. That’s illegal.

Lars Dalseide of the National Rifle Association’s Institute for Legislative Action told Townhall, “any sale from any licensed dealer first has to go through a background check. It doesn’t matter if he’s selling the firearm at a store, online, or at a gun show. When it comes to online sales, guns can only be transferred to the buyer through a federally licensed firearms dealer – that’s the law.”

The grass only LOOKS greener

Human nature has always been seeking life outside of God. We do it too. We tell ourselves that it is of God. Maybe it’s just a little outside His will, but we still want to indulge in it.

The truth is, there is nothing outside of Him. It’s all in Him — every revelation, mystery, fullness of deity, true joy that lasts. Everything is in Him.

Whatever you thought you wanted that was outside of God’s will is not good. The only good is inside Him. So stop focusing on what you don’t have. Rejoice in your blessings and live!

Comments Off on The grass only LOOKS greener