We love Jim Caviezel and are avid fans of his current show, Person of Interest. We watch via Netflix only after it comes out on DVD, so we’re seeing Season 4 right now.

I’ve been puzzling over why they chose “Samaritan” for the name of the evil A.I. that is trying to take over the world. After all, the parable is about the GOOD Samaritan, right? Well, we were watching the show the other night and I had this ah-ha moment about how Samaritan is a type of Anti-Christ, while the wrinkly, white-haired guy is a type of the False Prophet.

Like the Anti-Christ, the “good” Samaritan A.I. appears to be all about global peace and prosperity, but it is really a wolf in sheep’s clothing.  Now read John 8:47-49 and keep in mind that, during the last days, the Anti-Christ will be possessed by Satan himself.

Jesus said, “Whoever belongs to God hears the words of God; for this reason you do not listen, because you do not belong to God.”

The Jews answered and said to him, “Are we not right in saying that you are a Samaritan and are possessed?”

Jesus answered, “I am not possessed; I honor my Father, but you dishonor me.”

Comments Off on Person of Interest

We cannot earn our salvation.

But neither are we saved by faith alone.

Once upon a time, I gave my life to Jesus and He gave me a beautiful, red tricycle named Faith. I love to ride Faith and ring her shiny bell. I’d pedal up and down the sidewalk and tell everyone who passed about the wonderful gift my Lord and Savior had bestowed upon me. 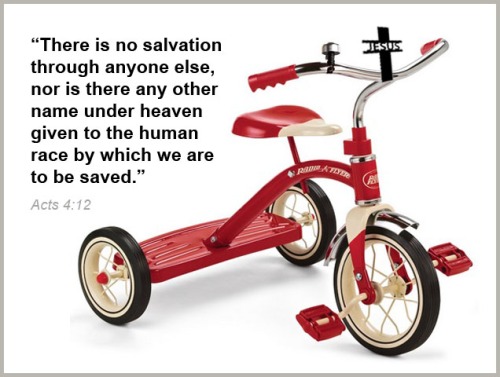 Many years later, I died and my guardian angel said that, before he could present me at the Pearly Gate, I would have to rescue Faith from my much-neglected, spiritual garden.  When I saw all the thorns that had grown up around Jesus’ free gift, I asked my angel for pruning shears and a pair of sturdy gloves.  He shook his head and reminded me that, when Jesus was scourged and crowned with thorns, He had had no protection for his skin.

Ashamed of having forgotten the cost of my salvation, I gritted my teeth and set to work. Each bloody wound a thorn inflicted brought forth a memory of a sin I had committed or of a good deed I had neglected. By the time I finally found what was left of my once shiny Faith, I was broken in spirit. Weeping with remorse for my prideful and selfish life, I asked my angel, “Will Jesus still forgive me?!” He told me to pick up the rusty, twisted remains of my once shiny Faith and then he carried us through a bright tunnel of light.

At the end of the light, we joined a long queue of souls. I recognized one fellow who was dragging a broken pedicab and asked my guardian angel, “Isn’t that my old pastor?”

“Yes,” he replied. “He was given a pedicab when he accepted his vocation to help souls come to Jesus. But he was a lazy man, so he never read or preached from any parts of Scripture that said Christians must practice Works of Mercy. He is the one who assured you again and again that you were saved by faith alone and that Jesus’ blood would cover all your sins.” 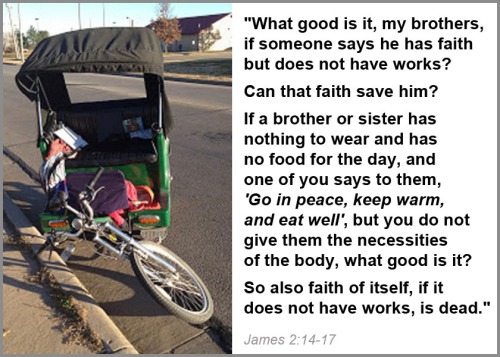 “But didn’t St. Paul teach that none will be justified by works?” I asked.

“Yes, he did say that. But you need to read the whole of Romans chapter 3, not just verse 28. The ‘works’ he was referring to were the Old Covenant sacrifices and rituals, like circumcising all males, obeying the Jewish dietary laws, and keeping the Sabbath rest. He was not talking about performing Works of Mercy, by which Jesus clearly taught you will be judged.”

Just then a newcomer and his angel got into the line behind us.  He was pushing a gleaming, well-oiled, mountain bike that was loaded down with bulging packs. I asked my angel why he had been given a mountain bike. My angel said, “He started out with a tricycle too. But as his works multiplied, so did his need for bigger and better bicycles that could hold all his heavenly treasure.”

I fell to my knees and began to weep with great wrenching sobs. “Have I lost my salvation?!”

My angel said he did not know. “It is true that you were not watchful; but it is also true that you never denied Our Lord. I suggest you spend your time here in line praying for forgiveness.  Once we get to the front, we will learn if your name is still in the Book of Life.”

The Bible says both Faith and Works are Needed for Salvation by Sal Ciresi
https://www.ewtn.com/library/ANSWERS/FAWORKS.HTM

Comments Off on We cannot earn our salvation.

Just an assortment of odds and ends for anybody who happens to wander by.

My black friend Willie and I were chatting as we prepped our papers this morning, talking about nothing in particular. On a whim, I thought I’d see if I could get him started ranting, so I mentioned about what a filthy religion Islam is. To my knowledge, he’s not a muslim. Heck, he has a white wife and he works two jobs. But that was all it took.
“Have you ever read the Koran?” he asked.
“You mean the one that says if somebody doesn’t believe what you do you have a right to kill them? Or adulterers are to be stoned to death? Christians and Jews beheaded? Kill your daughter or wife if she speaks to a man who’s not a relative? Or the part about 40 year old men marrying 8 year old girls?’

He never heard a word. He just kept shouting about non-muslim terrorists, but couldn’t come up with anything but the Planned Parenthood shooting. This is the same friend who, after 7 years of Obama destroying the middle class, is still claiming these are all Bush’s fault. He’s still my friend but he is still firmly ensconced on the liberal plantation. There is no reasoning with unreasonable people.

PLANS HAVEN’T BEEN ANNOUNCED YET, BUT I’M SURE THE HAPPY CAMPERS WILL BE JETTING OFF TO HAWAII ON OUR DIME FOR A FEW WEEKS. 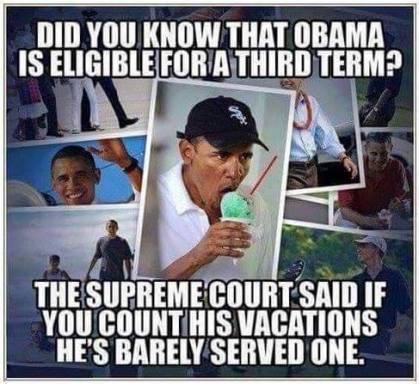 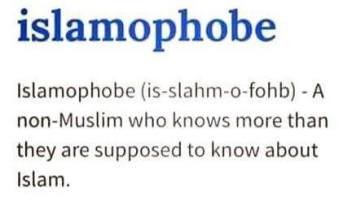