I have been thinking all day about how well Satan has manipulated the Atheist Socialists who have been working so diligently to destroy the U.S. from within.

For a century, they’ve been busy as beavers, carrying out the plans of the Frankfurt School, Saul Alinsky, and Cloward-Piven and now, just as success is on the horizon … whoops! The Muslims are baaaaaack!

And guess what? The Lefties have made America weak enough that the Muslims will be able to carry out their plan for a world-wide Caliphate. Thank you very much, Atheist Infidels. Now die!

Lefties who survive the holocaust won’t like the world they helped create. Free birth control? Abortion on demand? Ha! Non-Muslim women are for raping; Muslim women are for procreating. Gender bending behaviors? We throw you off tall building, then cut your head off. Free college? Campus safe spaces? Sure. Here is your Qu’ran. Memorize it. In Arabic.

Learn How America Got Into This Mess:

Is The Cloward-Piven Strategy Being Used To Destroy America?
By Tyler Durden – July 3, 2014
http://www.zerohedge.com/news/2014-07-03/cloward-piven-strategy-being-used-destroy-america 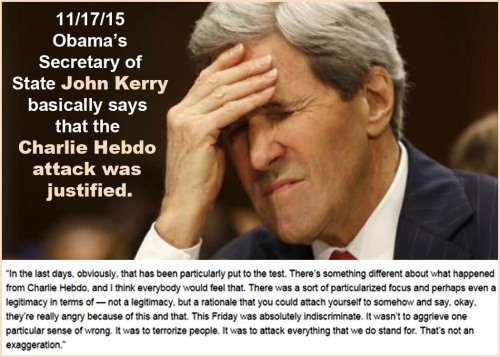 Is John Kerry stupid? This is not a rhetorical question. …

Our brand-spanking-new secretary of state has spent a considerable amount of time in the Middle East over the past month. That makes sense, since the Middle East is the epicenter of the world’s troubles.

But Kerry has chosen not to concentrate on the immediate crises at hand there — the killing grounds in Syria, the roiling streets of Egypt, even (a little bit to the North) the troubles in Turkey. Instead, he’s dedicated himself to a lingering policy problem that is a) not in crisis, b) uniquely unready for any kind of forward movement at present and c) utterly beside the point at the moment.

That matter is, of course, the relationship between Israel and the Palestinians.

Comments Off on Thinking is hard

As for me and my house

Dear Lord, Please place a hedge of protection around all our law enforcement and military members that no harm may come to them. Grant them wisdom as they determine which leads are worth following, that they may be successful in averting disaster. Amen. 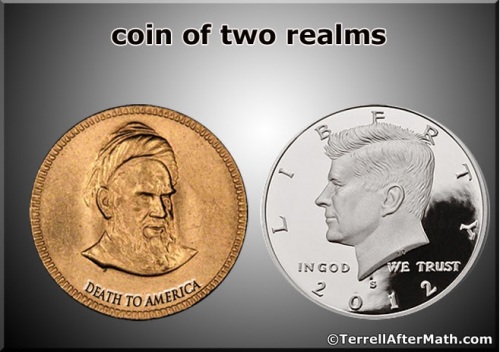 Comments Off on As for me and my house

Heads up, Dumbocrats! You can’t blame Republican leadership for ISIS.

Not that they won’t try. Some of their moron followers will even believe it. But then … Jim Jones’ followers believed drinking the kool-aid would ensure them a seat on the alien spaceship.

In the interview above, Obama also sneered at Ben Carson’s assessment of Obama’s military leadership in the Middle East, saying “He doesn’t know much about it.” Back in the day, then-Senator Obama was a very harsh critic of Bush’s handling of the war on terror. Now he whines about how hard it all is and how it takes time, which are exactly the things Bush said back then.

“Number one, the president was 100% wrong. If you don’t clearly define the enemy that you’re going to face, you cannot figure out the way to defeat that enemy. We are facing radical Islamists.

“And frankly, this is a war on reality, and the president and his close advisers need to get real. They are obviously not under enough pressure, they are not JVs, they just demonstrated that again, and they will absolutely attack again in places like London, in places like Berlin, in places like New York, in places like Washington, DC. They’re very, very well organized.

“This is the problem of letting the world go to hell and assuming it won’t come back to bite you in the rear end. And our frankly — and I’m going to be very candid here, Sean — our amateurish foreign policy has its own place of responsibility in the mayhem that we are seeing right now.

“The president, to stand there and say that our strategy is working against this vicious, vile enemy, is absurd. It’s absolutely absurd. And I just — I’m stunned at his press conference today, and the way he characterized this brutal attack, this brutal 9/11-style attack in Paris as a ‘setback.’”

Comments Off on Heads up, Dumbocrats! You can’t blame Republican leadership for ISIS.

By their fruits, we know him.

Nov. 15, 2015: At the G20, the rest of the world’s most powerful leaders stood for a somber observance to honor Friday’s terror-attack victims in France. Obama arrived in the middle.

“Make no mistake. ISIS would not exist if not for Obama’s policies. This is not partisanship, it is simply the truth. Obama armed and funded the ‘rebel forces’ in Syria. Many of those rebel forces soon became what we now know as ISIS. Obama should be made to answer for that.” – Matt Walsh

Nov. 16, 2015: Lt. Col. Ralph Peters (Ret) “I’m really worried” [4:31] – The only president on the American continent who ever did more damage than Obama to the United States was Jefferson Davis.

Comments Off on By their fruits, we know him.

Most of the European continent has finally, if belatedly, been shaken to its core from the folly of welcoming ravening Muslim animals to live amongst them. The Jewish population in France is only 1%, but they are victims of 54% of violent crime. Perhaps the surrender monkeys felt as long as it was just Jews that were suffering it didn’t matter. Last Friday they found out differently. Though not widely reported, Sweden has become the rape capital of the world, and 100% OF THE RAPES ARE BEING COMMITTED BY MUSLIM IMMIGRANTS.

Back home, more than 27 governors, including at least one democrat, have said they will not accept any of these wretched vermin. Obama, for his part, will not acknowledge his friends did anything wrong and will continue to try to bring as many scum as he can before he has to leave office.

In case you hadn’t heard, they slipped something they referred to as a democrat debate Saturday night while no one was looking. It was so devoid of any substance they should probably cancel any future shows because there’s no real point. This was held the day after the Paris attacks. The greasy hag refused to answer any questions and Bernie blamed it on climate change.

BARRY WAS AT A MEETING OF WORLD LEADERS IN TURKEY YESTERDAY. THERE WAS A PRAYER FOR THE VICTIMS IN PARIS BEFORE THE MEETING BEGAN. OBAMA, OF COURSE, ARRIVED TOO LATE TO JOIN IN THE PRAYER.
Obama On His ISIS Strategy: I’m Not Interested In ‘American Leadership, Or America Winning’

Throughout Monday’s press conference, Obama insisted that his strategy for defeating ISIS was working and did not need to change. On Friday, just hours before the deadly Paris attacks, the president insisted in a television interview with ABC News that his administration had “contained” ISIS.
“What I’m not interested in doing is posing or pursuing some notion of American leadership or America winning or whatever other slogans they come up with that has no relationship to what is actually going to work to protect the American people and to protect the people in the region who are getting killed and to protect our allies and people like France,” Obama said. “I’m too busy for that.”
TOO BUSY TO CONCERN HIMSELF WITH THE SECURITY OF THE COUNTRY HE ALLEGEDLY LEADS.
http://thefederalist.com/2015/11/16/obama-on-isis-im-not-interested-in-american-leadership-or-america-winning/

Obama Warns People Not To Blame Islam For Paris Terror Attacks…
I WILL NOT POST HIS ENTIRE SPEECH;I DIDN’T HAVE THE STOMACH FOR IT

President Who Said Boston Marathon Bombers Used A Crock Pot At G20 Press Conference Gets Pissed When Asked “Why Can’t We Take Out These Bastards?”
OBAMA HAD TO ENDURE A PRESS CONFERENCE YESTERDAY THAT WASN’T PACKED WITH HIS PERSONAL ASS-KISSERS 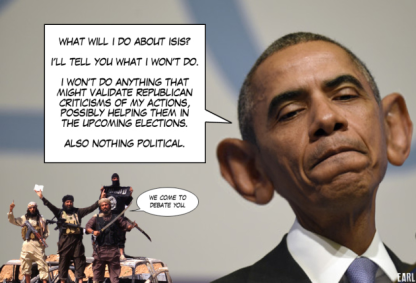