Satan is having fun 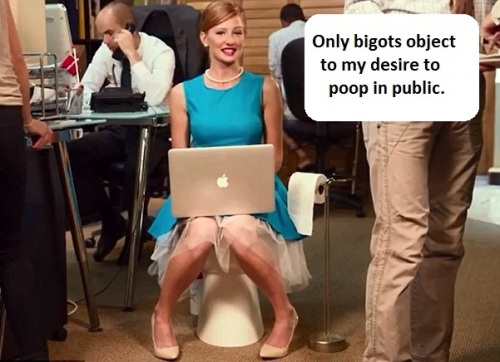 “We should all be paying attention to what happened in Illinois this week. Obama’s Department of Education told an Illinois school district that it may not prevent a gender-confused boy from using the girl’s locker room. The federal government has now officially ruled that boys who call themselves ‘transgender’ have a CIVIL RIGHT to watch girls undress. It’s lunacy, my friends. Total lunacy. …

“Liberalism is now an ideology completely divorced from any semblance of reality. It has, to use a popular phrase, jumped the shark. The only question is whether our culture will jump with it. So far, it seems that answer is yes. But we have to keep fighting to defend the basic notion of objective truth, because if we can’t draw the line here, I think the battle might be irreversibly and finally lost.” ~Matt Walsh

It is important to note here that this gender-confused boy was offered a private locker room in 2014. His family decided only full access to girls’ bathrooms, locker rooms and showers would meet their delicate princess boy’s needs. They filed a federal complaint saying the school violated the Title IX gender equality law and they won.

The US Education Department’s Office of Civil Rights has ruled that, if the district does not allow this physically male person free access, they will lose their federal funds. Last year, this district received $6 million from D.C.

One response to “Satan is having fun”