Climate Change Made Them Do It! 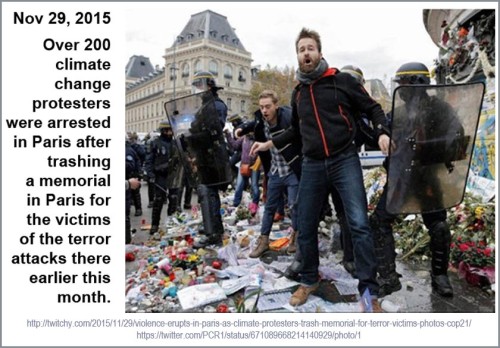 President Obama and Bernie Sanders are SURE that violence is due to climate change, NOT to one’s ideology … unless it’s violence they can blame on right-wing ideologies, in which case it totally is due to ideology. Or possibly a YouTube video.

So it’s OBVIOUS it was climate change that inspired these protesters to commit totally senseless vandalism, right?  Except, the climate hasn’t changed in about 18 years.  Plus, France’s President Hollande said, “these disruptive elements have nothing to do with defenders of the environment”, even though they said they were protesting to defend the environment.

So it’s OBVIOUS it’s just like Muslim terrorists and how their violence has nothing to do with Islam, even though they yell “Allahu Akbar” while they’re shooting Christians in the face.

Ideology has NOTHING to do with violence, right?!

Except that the Colorado Springs shooter was probably, maybe, possibly motivated by the CMP videos. And even if he wasn’t, he could have been and that PROVES anti-choicers are ALL VIOLENT WHACK JOBS!  Every last one of them! 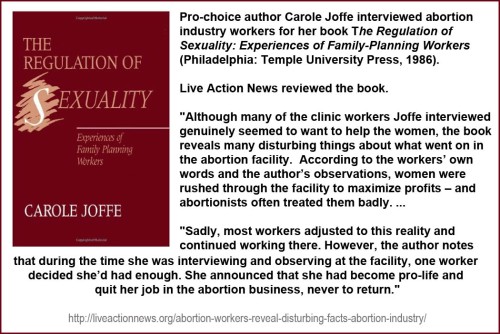 Speaking of ABORTION FOR PROFIT, Planned Parenthood president, Cecile Richards, makes more than half a million dollars a year to promote the abortion giant.

She is therefore understandably pissed that Texas has decided to shift funding from her personal cash cow to the hundreds of community clinics that provide the same health care services, minus the baby killing thing.

Richards claims that NOT giving Planned Parenthood tax dollars is “illegal and a violation of federal law.” Hard to figure how, when you look at this map. 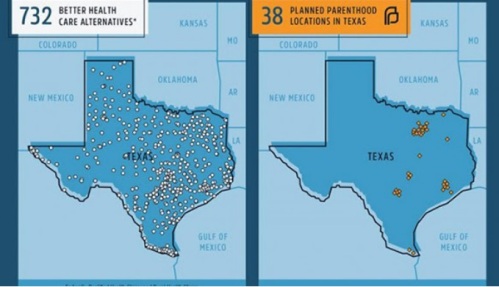 A conservative estimate of Planned Parenthood’s finances shows that the organization profits $500 on average for each abortion. IOW, Richards annual salary is the equivalent of 1,072 dead babies per year. 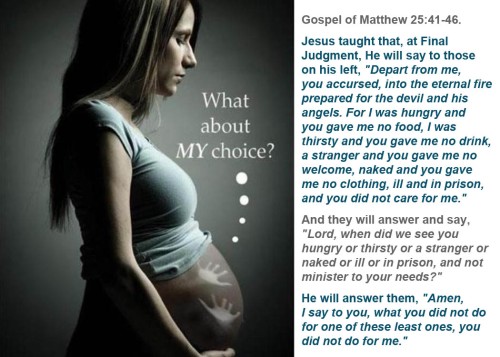 Comments Off on Abortion for Profit

After the Shemitah: Are we out of the woods yet?

At the end of Shemitah 5775, $11 trillion in global stock market wealth was wiped out. Since then, there have been some signs of a strong recovery.

Are we out of the woods? 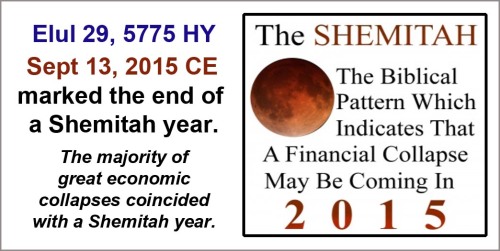 Jay Peroni, the chief investment officer at Faith-Based Investor and author of Blood Moons on Wall Street, says the following indicators suggest the answer is no. The recovery is merely the calm before the storm.

If Peroni is right, the worst is yet to come. 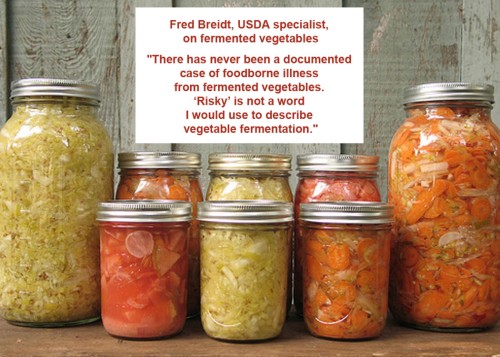 Sandor Katz: Can I Get Botulism from Fermented Veggies?

This is an excellent article by a guy who actually read all the studies and summarized them for home fermenters.  It is short and well written.  Definitely worth your time if this issue concerns you.
http://www.wildfermentation.com/forum/viewtopic.php?f=7&t=3654

Comments Off on Botulism in fermented veg? Never going to happen.

Since the Left makes it impossible to simply grieve violence these days, one is forced to respond to their lies again and again and again.  It’s so old, but what is a blogger to do?

The Colorado Planned Parenthood shooter isn’t a violent anti-choicer who was driven to violence by YouTube videos. He is a mentally disturbed man who has come up against law enforcement many times for charges ranging from voyeurism, cruelty to animals, and physical violence against neighbors and his ex-wife. His domiciles were filthy and run down. People describe him as aloof, weird, disturbed, and somebody to avoid.

One neighbor said, “He complained about everything. He said he worked with the government, and everybody was out to get him, and he knew the secrets of the U.S.A. He said, ‘Nobody touch me, because I’ve got enough information to put the whole U.S. of A in danger.’ It was very crazy.” 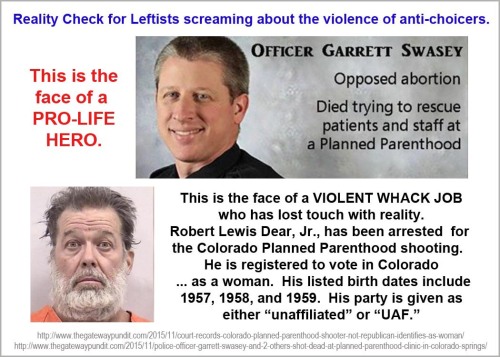 Prayers for the repose of souls of the deceased, for comfort for those who mourn their loss, and for the swift and full recovery of those who were injured.

A Vegetarian’s Nightmare or A Dissertation on Plants Rights

I rear-ended a car this morning…the start of a REALLY bad day!

The driver got out of the other car, and he was a DWARF!!

He looked up at me and said ‘I am NOT Happy!’

That’s how the fight started.

Comments Off on The Goofball Report

They call these things Eucharistic Miracles

In reality, every Eucharist is a Miracle!

A Catholic parish in Salt Lake City has possibly been gifted with a Eucharistic Miracle in the form of a bleeding host. The news crew explains the circumstances. Video embedded @

Note: It is standard practice for a soiled host to be dissolved in water for a period of time before being disposed of respectfully. 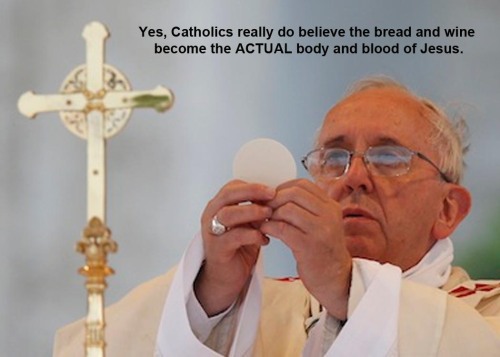 The Bread of Life Discourse: Gospel of John, Chapter 6 [excerpted for clarity]

Jesus said to them, “I am the living bread that came down from heaven; whoever eats this bread will live forever; and the bread that I will give is my flesh for the life of the world.”

The Jews quarreled among themselves, saying, “How can this man give us [his] flesh to eat?”

Jesus said to them, “Amen, amen, I say to you, whoever eats my flesh and drinks my blood has eternal life, and I will raise him on the last day. For my flesh is true food, and my blood is true drink.”

Then many of his disciples who were listening said, “This saying is hard; who can accept it?”

Jesus said to them, “Does this shock you? The words I have spoken to you are spirit and life.”

As a result of this, many [of] his disciples returned to their former way of life and no longer accompanied him.

The Eucharistic Miracle of Buenos Aires – 1996

The Catechism of the Catholic Church

Something to meditate on …

Tests of the blood on the Shroud of Turin and of the blood in the Eucharistic Miracles of Lanciano and Buenos Aires all show that Jesus had blood type AB-positive. About 3% of the human population has this blood type.

“He himself bore our sins in his body upon the cross, so that, free from sin, we might live for righteousness.” 1 Peter 2:24 [NABRE]

AB+ is the universal donor for blood plasma transfusions. Blood plasma is the pale yellow liquid component of blood that normally holds the blood cells in whole blood in suspension. It makes up about 55% of the body’s total blood volume. AB+ plasma can be safely given to any and all blood types.

Alan Jackson – Are You Washed In The Blood

Being politically correct for the last….five minutes.
Hope everybody had a great holiday. I missed dinner at SD’s and stayed home sick. DW brought home some leftovers and fixed me a turkey sammich with cranberries and pumpkin pie. It was awesome.

More than 30 million idiots gave thanks for all their blessings yesterday then went out and fought like ravening wolves over cheap electronics and kitchen appliances. Some 100 million more are expected today. I went by the Starbucks I deliver the New York Times to at 4:10 this morning. They open at 4:30. There were already 5 cars lined up at the drive-thru to pay six bucks for a cup of foam. We stay away from the crazies this time of year but DW has the patience to go to a mall, find a parking space and stand in a long checkout line. I have no patience whatsoever. None. Every bit of shopping I do (which isn’t very much) is done from right where I’m sitting now. You order it, pay for it and they send it right to your door. Piece of cake.

From the video:
I’m posting anonymous because I don’t want 2b fired, but I work at this store in saginaw and this lady stole a veggie steamer from a KID on black friday! Shame.

Have you ever seen so many people get so excited over veggie steamers?

I REMEMBER YEARS AGO WHEN IT WAS A REALLY BIG DEAL TO GO DOWN MICHIGAN AVENUE, CHICAGO’S MAGNIFICENT MILE. AND SEE ALL THE WINDOW DISPLAYS AND DECORATIONS. UNFORTUNATELY WE ARE NOW LIVING IN OBAMAWORLD.

Chicago was subjected to a second night of protests after the release of police dashcam video depicting the 2014 shooting of an African American teen, with protesters fanning out beyond the planned protests and even destroying Christmas tree decorations while yelling “black lives matter” and “F*ck your Christmas tree!”

THERE’S NO REASON TO POST THIS IMAGE HERE, BUT IT WAS ON MY FB PAGE AND I THOUGHT IT WAS COOL. 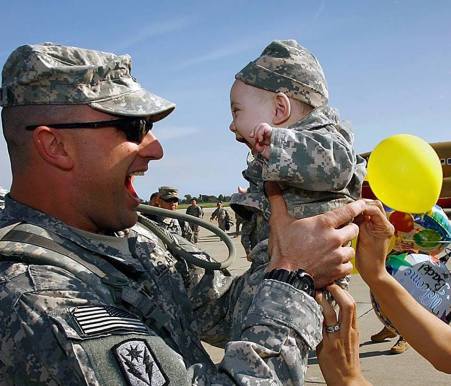 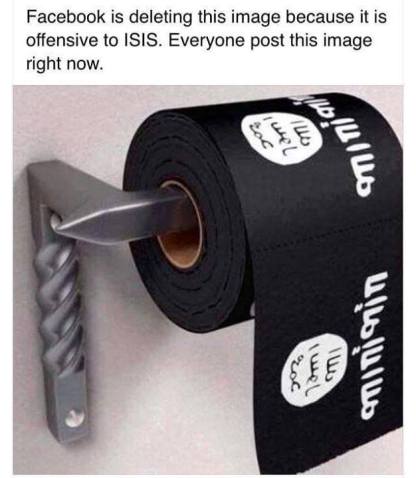 The Mayflower’s Puritan Pilgrims arrived ill prepared for life in the New World. By the end of their first winter, half of the 102 settlers were dead.

Previous European visitors had imported diseases against which the natives had no immunity. In the area where the Puritans settled, pandemics had spared only 1,000 of a once mighty confederation of 20,000 natives.

[It should be noted that Europeans had no understanding of or control over these diseases. In fact, deadly infection could have gone the other way, as it had two centuries before, when sailors returning from Asia unwittingly imported Black Plague, which killed 75 to 200 million Europeans in the space of about seven years.]

The native leader, Massasoit, was not happy the Puritans had arrived; he was even less enthused about their plan to stay.  And when the starved Puritans found some of their cache of corn and took it for their own use, he decided he’d had enough.

It would have been a simple matter for Massasoit’s warriors to wipe out the failing colony. They did not do so because an English-speaking native, a man we know as Squanto, convinced Massasoit to let him help the settlers.

Squanto introduced himself to the Puritans and served as a translator and diplomat for them in their negotiations with Massasoit. He arranged a pay back plan for the corn they’d taken and helped them with local seed and farming advice suited to the unfamiliar climate.

Squanto’s intervention was interpreted correctly by the Puritans as a blessing straight from God. Ironically, this blessing came to these rigidly anti-Catholic Protestants by way of Pope Paul III and a group of Catholic priests!

In the 16th c., some non-Catholic Christian denominations were teaching that the natives in Africa and the New World were not “made in the image of God” human beings, but rather soul-less animals, the same as pigs or cows.  [Sound familiar?]

In 1537, Pope Paul III taught infallibly that this was nonsense.  Native Americans “and all other people who may later be discovered by Christians, are by no means to be deprived of their liberty or the possession of their property, even though they be outside the faith of Jesus Christ.” –Sublimus Dei: On the enslavement and evangelization of Indians (1537)

This is why, in 1614, Catholic priests intervened to spare the kidnapped Squanto from being sold into slavery in Europe.  These priests catechized and baptized him into the Catholic Christian faith.  He then lived and worked among the British, learning their customs and language until 1619, when he returned to his home in the New World.

Tragically, he found everyone in his village had died.  Massasoit was justifiably angry about the European’s diseases, but it seems to me that Squanto, having also been kidnapped by a British slaver, had even greater cause to seek revenge.  The fact that Squanto chose mercy over retaliation suggests to me that he was truly a follower of Jesus Christ.

What an excellently ecumenical God-incidence that the first Protestant settlement to survive in the New World owed its very survival to a baptized Catholic! 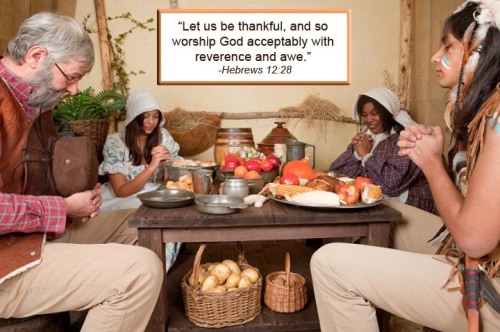 Comments Off on The Thanksgiving Irony

Everyday tradecraft? I don’t think so. 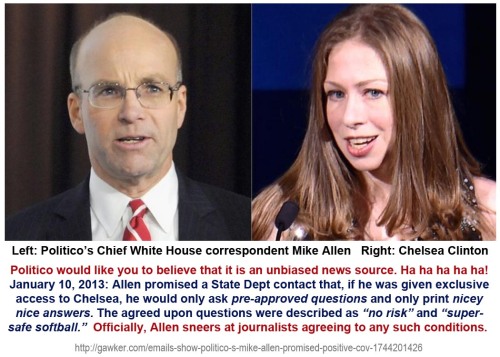 This story broke in Gawker, which is to be commended for pursuing the truth into the courts. The State Department initially denied Gawker’s Freedom of Information Act request for Clinton aide’s emails, claiming they didn’t exist. After Gawker sued, State said oops, approximately 17,000 such emails did exist. This number is now up to 90,000. 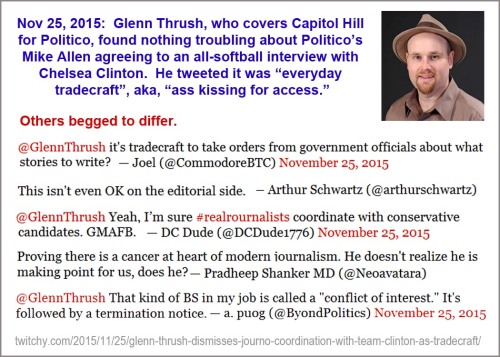 Comments Off on Everyday tradecraft? I don’t think so.