If the 2016 Presidential election were held today 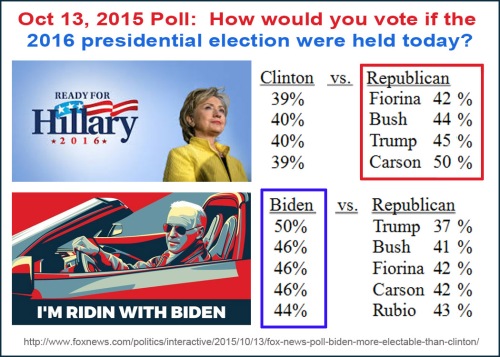 The Fox News Poll is conducted under the joint direction of Anderson Robbins Research (D) and Shaw & Company Research (R). The poll was conducted by telephone with live interviewers October 10-12, 2015 among a random national sample of 1,004 registered voters (RV). Results based on the full sample have a margin of sampling error of plus or minus three percentage points.

The Left would go ballistic if anyone used this kind of language about a Democrat who happened to be black. 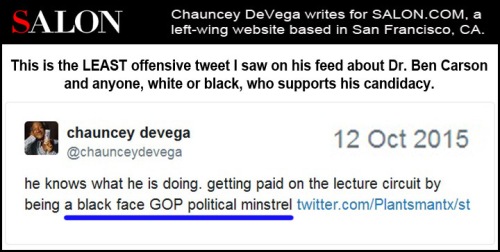 I read Chauncey DeVega’s tweets for the past three or four days. Lots of profanity and hatred.  Plus, somehow the righteous indignation of right-wingers over his filth-ridden, racist remarks somehow proves he’s right that we’re all “sewer dwellers” and “urinal cake eating” RAAAAAAAAAAAAAACISTS.

Here is another example of what passes for insightful political commentary at Salon. 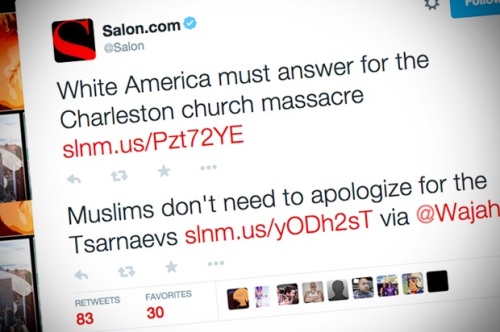 I need a hot shower. With bleach.

Democrats are all about diversity … just ask them!

The Democrat 2016 presidential candidates are all white, with one female.

When Debbie Wasserman-Schultz was asked about this, she said, “We are the party of diversity. The Republicans are essentially the party of a monolithic view that is narrow-minded.” 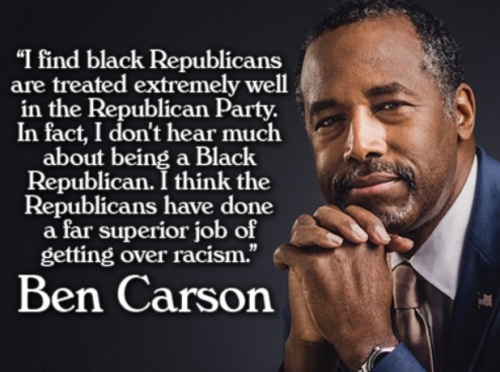 The view from high atop Obama’s nose

During a discussion with a Christian author, President Obama asked, “How do you reconcile the idea of faith being really important to you and you caring a lot about taking faith seriously with the fact that, at least in our democracy and our civic discourse, it seems as if folks who take religion the most seriously sometimes are also those who are suspicious of those not like them?”

The author, who clearly knows that opening up God’s saving love to all mankind (not just Jews) was at the heart of Jesus’ ministry and mission, correctly replied that those “turning in on themselves — and God knows, arming themselves” against an “imagined other,” are not “taking their Christianity seriously.”

Not much has changed in Obama’s attitude toward “those not like [him]”, has it? In 2008, he famously dismissed small town, right-wing Christians as xenophobic bigots too.

This is rich coming from a man who has spent his entire presidency advancing the spread of xenophobic, bigoted, Muslim terrorists. 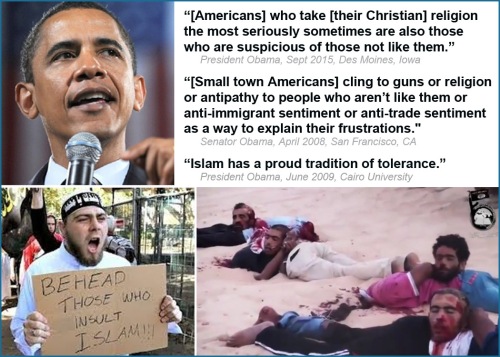 Oh wait. Doesn’t that mean that Obama is a bigot and a xenophobe? The fact is that Obama’s lassez-faire attitude only applies to sin.

If God hates it, Obama is all for it.

This is not surprising coming from someone for whom “god” is a concept rather than a foundational absolute, a haloed reflection of his own image rather than the great I AM who created all that is.

Does Obama even listen to his verbal content, or are his mellifluous tones sufficient to lull him into a self-congratulatory trance?

Comments Off on The view from high atop Obama’s nose

This is to allay the fears of my good friend and bestest buddy, Chrissy, who expressed concern about a comment I made about the movie Behind the Green Door. This movie was made in 1972 and was in the same genre as Deep Throat and Debbie Does Dallas. The noteworthy thing about this film was that the star, Marilyn Chambers, was the model for the box of Ivory Snow Soap Flakes. 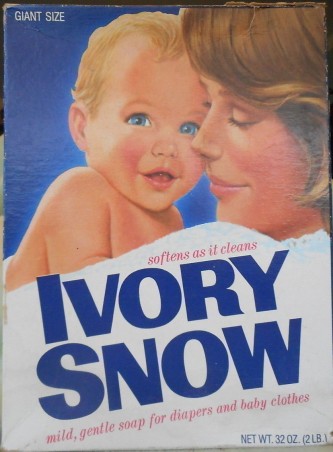 This was during the time when movies were filmed in 16MM and shown in “art theaters” frequented largely by smelly, sweaty men wearing overcoats, loose-fitting trousers and looking much like Harry Reid and Bernie Sanders. Compared to the array of smut available today on any computer screen, these were actually funny, given the contrived plots, dialogue, the actresses all wore wigs and the actors had moustaches like David Axelrod.

Would anybody in their right mind actually take a date to one of these places? Well, OK, but it was her idea. To avoid any possible chance of someone seeing me, we went to a show in a town 30 miles east of here. The theater itself reeked of bodily secretions and heavy duty pine cleaner.

My date was a girl I went to college with, and we had done a couple theatrical productions there. To say she was outspoken would be an understatement. During the entire film she kept a running commentary loud enough for everyone to hear.

‘Yeah,give it to her good!’

I tried to slink down in my seat as far as I could without sliding onto that nasty floor. When the movie was about over I took her hand and beat a hasty retreat out of there. As we’re heading back to the car I was looking straight ahead, not risking eye contact with any of those perverts. Once we were safely away, I asked her if she learned anything. I had the unfortunate luck of taking her to a movie that starred John Holmes. “Johnny Wadd,” as he was known, had to have had an organ transplant from a Shetland pony. She said,”Yeah,I learned how inadequate you are.”

By the time I was married for the second time I came to the realization that art does not, in fact, imitate life. I never came across that van full of cheerleaders all wanting to have their way with me. Once you learn how to appreciate a good woman you don’t need that kind of crap. 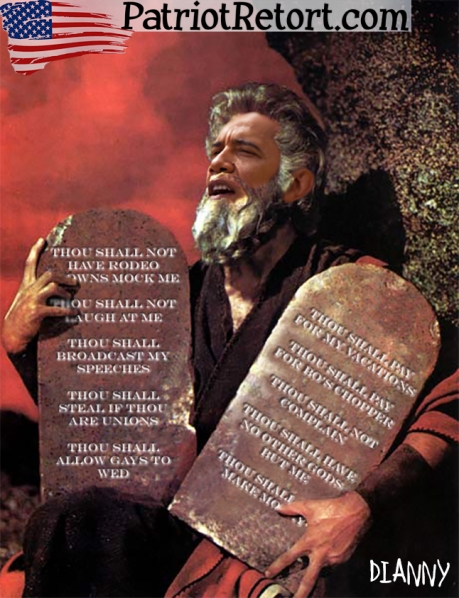 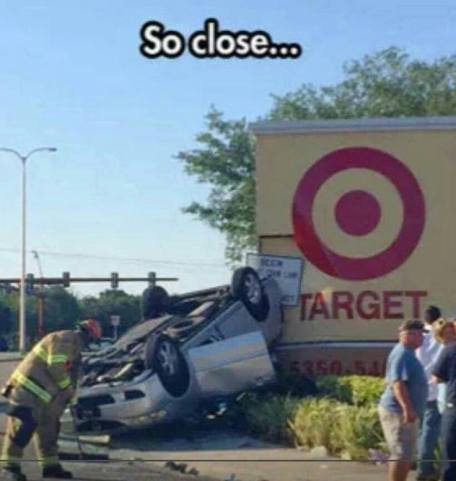 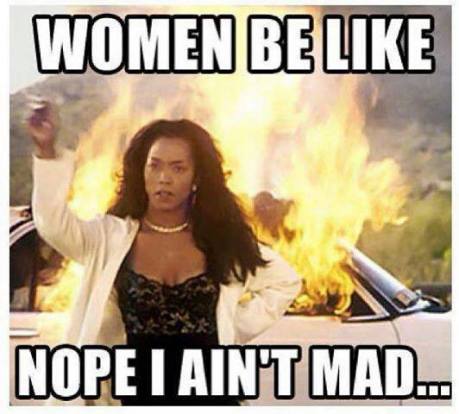 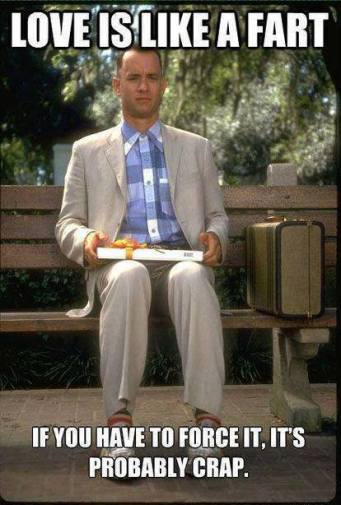 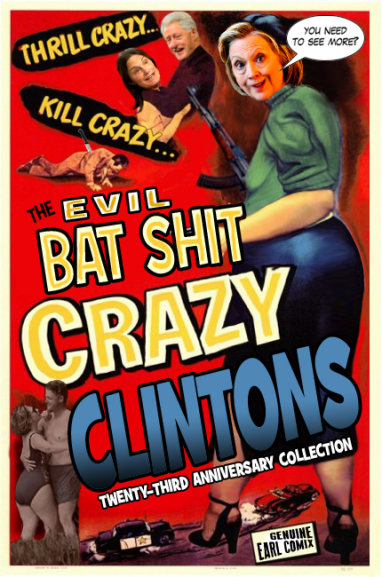 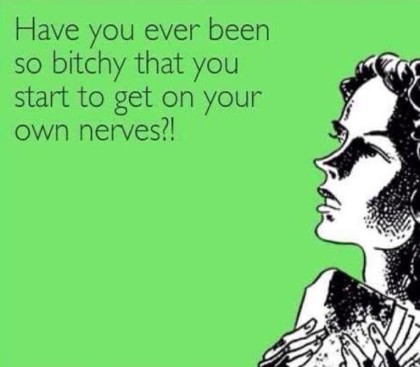 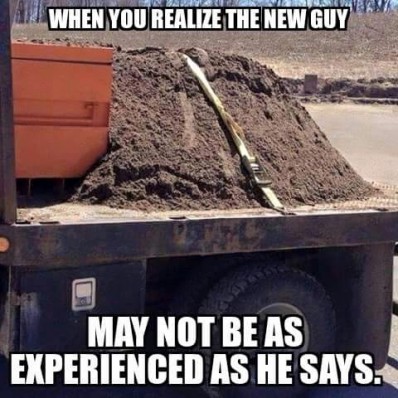 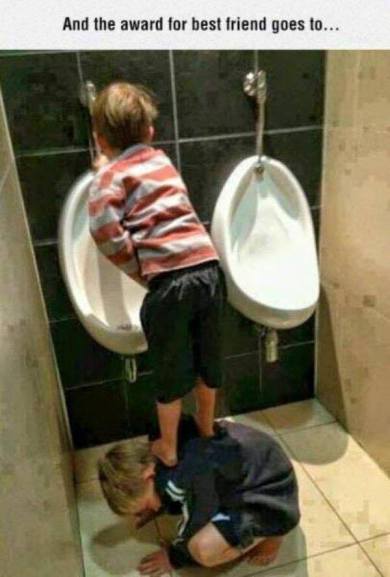 The P.I.G. to the Presidential Debates 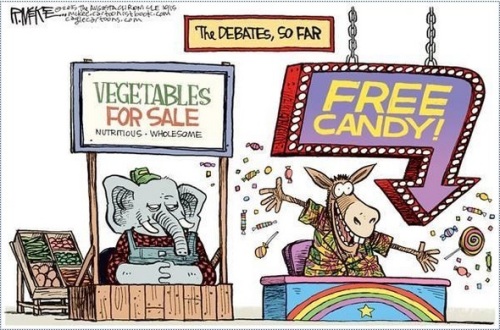 The neighborhoods he refers to are all in the ghettos that fester in Democrat-run cities.  And the guns are illegal.

Comments Off on The P.I.G. to the Presidential Debates