Nov 1: The Feast of All Saints

People do not believe me when I say that God the Father can and will speak to you if you would just open your heart in Faith and allow Him to do so and you can do this every day! For those who still do not believe this is possible I leave you with the words of St. Catherine Laboure… “When I go to the Chapel I place myself before the good God and I say to Him: ‘Lord, here I am, give me what you will.’ If He gives me something, I am very pleased and I thank Him because I do not deserve anything. And then again, I tell Him all that passes through my mind; I recount my pains and my joys and… I listen. If you listen to Him, He will speak to you also, because with the good God it is necessary to speak and to listen. He will always speak to you if you go to Him simply and sincerely.”

St. Catherine Laboure is the nun to whom Our Lady revealed the Miraculous Medal.
https://www.ewtn.com/library/MARY/CATLABOU.HTM 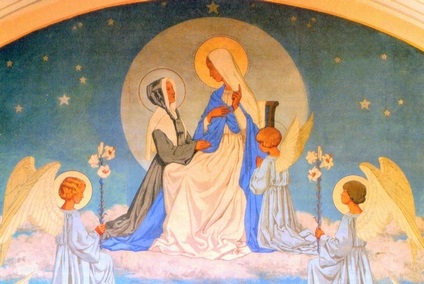 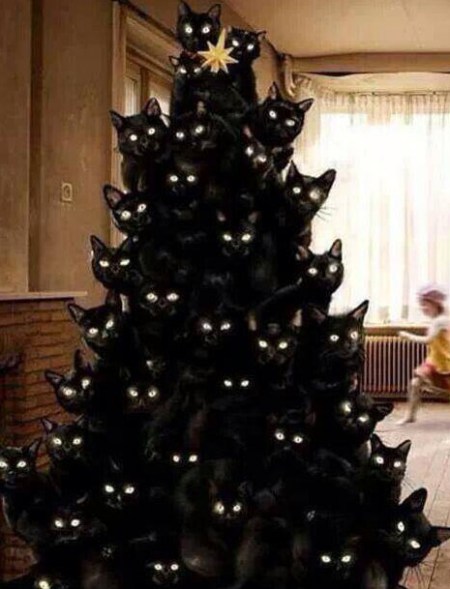 Halloween Science: Your Cats Really Are Trying to Kill You

DailyMail[via Whoopie at BlurBrain] – They are well loved for their immaculate fluffy coats and unique personalities but new research suggests cats do have a much darker side.

A study carried out between the University of Edinburgh and Bronx Zoo compared our beloved domestic cat with its wilder relatives.

Compared with the snow leopard, the Scottish wildcat and the African lion, researchers found these larger predators shared similar characteristics of aggression and neurotic behaviour to domestic cats.

‘They’re cute and furry and cuddly, but we need to remember when we have cats as pets, we are inviting little predators into our house,’ psychologist Dr. Max Wachtel told 9NEWS.

‘For a lot of people, it is worth it. Cats can be fantastic, sweet companions. Until they turn on you.’ Only their size prevents the cat from being able to unleash its full predatory qualities.

Read the rest at DailyMail. Stolen from BlurBrain. Posted by Grunt primarily to piss off Bluebird Of Bitterness. Heh heh heh. 🙂

Halloween gets a cat scan

A Simon’s Cat double header, plus a dose of existential angst from Henri, the feline philosopher.

Comments Off on Halloween gets a cat scan

Kevin Sorbo provided us with a run down on how the first Democratic Debate on October 13th went.

1. Black Lives Matter, All Lives Don’t Matter.
2. College is worthless because it will soon be free.
3. Medical treatment is worthless because it will soon be free.
4. To become an American Citizen is worthless as it will soon be free.
5. The economy sucks and after 7 years in office, it’s not Obama’s fault.
6. The Middle Class is shrinking and after 7 years in office, it’s not Obama’s fault.
7. The Average Family income is dropping and after 7 years in office, it’s not Obama’s fault.
8. Black youths have over a 50% unemployment rate and after 7 years in office it’s not Obama’s fault.
9. Hispanic youth unemployment is over 35% and after 7 years in office, it’s not Obama’s fault.
10. 50% of the Population is paying 100% of all the taxes and they are still not paying their fair share.
11. Everyone who votes Democrat will work less, make more, get more time off, spend more time with family pay less taxes and get more government subsidies.
12. Everyone else does it, so should we, regardless of the results in other places.
13. Government wants more money to squander on promises already broken.
14. The word “Progressive” is the less cringe worthy than saying you’re a Liberal. Actually code for Communist.
15. When America grows up, we want to be Norway, Sweden or The Netherlands.
16. There’s a quagmire in Iraq, Syria and the Middle East and Obama’s retreating from the area and wants nothing to do with the situation.
17. Republicans want dirty air, dirty water, oil spills, trash on the streets, polluted oceans, old people without medical treatment, young people without educations being paid the lowest wages possible, and starving children. They don’t believe in equal rights or Affirmative Action and were responsible for Jim Crow Laws.
18. Snowden and General Petraeus broke laws for releasing and not securing secret documents but Hillary Clinton shares no responsibility for doing the same thing.
19. Marijuana cures all diseases.
20. Marijuana smokers are being imprisoned for smoking a joint.
21. Everything is rainbows and Unicorns.
22. Hillary Clinton does walk on water.
23. Cheaters do prosper.
24. People cheer stupidity.
25. There are only 2 candidates given a voice in the Democratic Race.
26. Hillary and Bill Clinton were born Poor Black Children.
27. All the qualifications needed to be President is to be a woman.
28. Evil looks like anything white, rich, successful and productive.
29. You will receive a participation trophy in life.
30. Agreements of any kind should be signed and committed to even if the other agreeing party doesn’t live up to its obligations.
31. Everything is still Bush’s fault.
32. Oh and about that Black Lives Matter thing, that does not include Dr. Ben Carson.

Comments Off on Zombie journalism

The problem with Hillary is …

… that her supporters are as corrupt as she is.

Rose and Rubio Spar About Clinton’s Narrative on Benghazi

As his hack-tastic fellow “journolisters” were gleefully furthering the “kill cops” cause, CNN’s Don Lemon
insisted he needed to know more before judging.

Lemon said everyone, particularly a prosecutor like Hostin, “should want to know more.”

The “victim’s” classmates did know more.  They voted with their feet in favor of the officer. 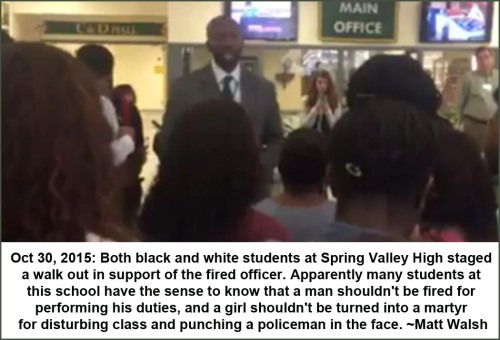 Don’t forget to turn your clocks back tomorrow night.
The political stuff is in the comments, as always.
Thought you’d enjoy a little Halloween fun, just because the alternative is so depressing. Keep in mind, Christmas is 8 weeks from today.

THESE KIDS HAVE SOME AWESOME PARENTS 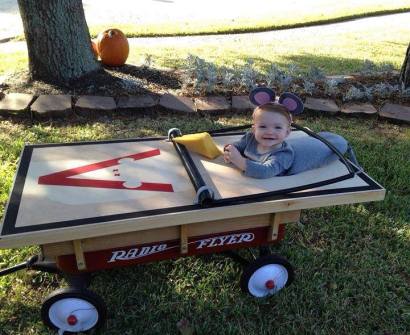 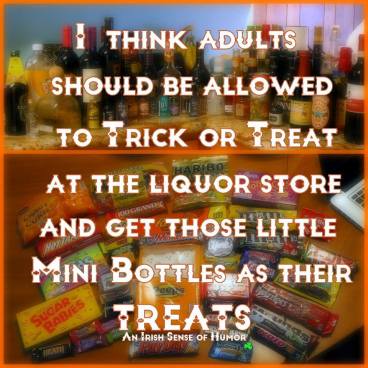 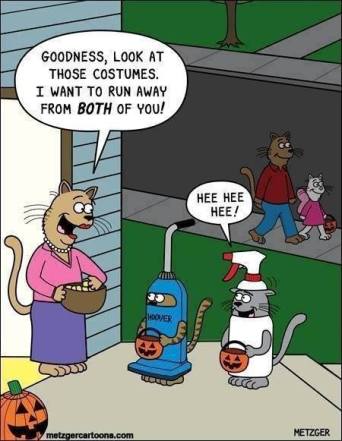 Refusing to take a side IS taking a side

There are only two sides — God’s and Satan’s. 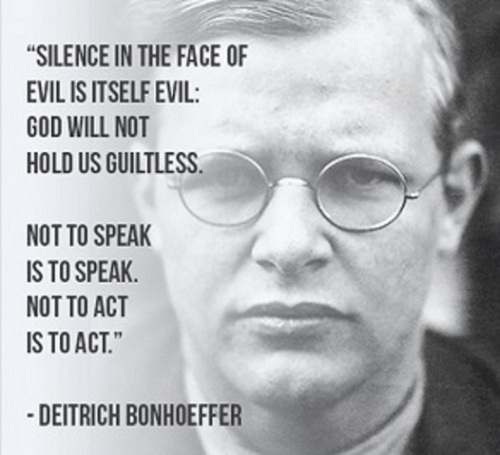 Dr. Alan Snyder (Professor of History in the Department of Historical, Legal, and Leadership Studies at Southeastern University in Lakeland, Florida) posted this on his blog:

“I understand why people can become cynical and think nothing they do can make a difference. The only problem with that thinking, though, as a Christian, is that it is a faithless position to take.

“If you want to guarantee that things get worse, stay on the sidelines and do nothing. But the Gospel I believe in, and the God of that Gospel, tells us to make disciples of all nations. He also tells us to be light and salt in a society. If we give in to a kind of fatalism for our future, we act against the very commands we have been given.

“God doesn’t promise that we will win every battle, but He does want to see warriors on the field, doing their best as they take their orders from Him. The question in our minds ought to be the one asked by Jesus Himself when He queried, ‘When the Son of Man comes [back], will He find faith on the earth’?

“I want to be found faithful. How about you?”

Testimony of a former demonic priest

If Jesus can free him, He can free anybody!

I have a lot of up close, in person experience with demonic warfare. Based on my experience, I want to offer a couple of caveats to Ramirez’ message. One, the Word is truly powerful, but the Eucharist is even more so. Two, praying in tongues is not necessary. I was active in the Charismatic Catholic movement and I used to pray in tongues. However, when demonic warfare became a big issue in my life, I realized that I needed to know what I was saying. As Ramirez himself notes, demons can mimic the gifts of the Spirit; I just didn’t trust that my “tongues” were really from the Holy Spirit. I’ve been successfully fighting demons for two decades now without praying in tongues. Apart from these two points, I agree with what Ramirez said on the video. I haven’t heard the messages in the stuff they’re selling, so I can’t comment on those. I can say that it’s safe to order from the site. I ordered a set of Jonathan Cahn messages and they came very quickly. – CtH

Comments Off on Testimony of a former demonic priest