Eight things you need to know about Pope Francis 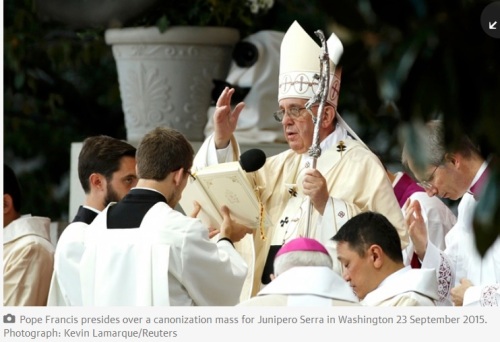 Michael Marinaccio did a brilliant job with six important issues including:

7. Pope Francis is NOT A MARXIST. Got that? Not. A. Marxist.
8. Pope Francis does not condemn the kind of capitalism we practice in the USA.

Here is a summary of Catholic teaching on these last two issues, quoted directly from the Catechism of the Catholic Church, paragraph 2425 (emphasis mine).

The Church has rejected the totalitarian and atheistic ideologies associated in modern times with “communism” or “socialism.” She has likewise refused to accept, in the practice of “capitalism,” individualism and the absolute primacy of the law of the marketplace over human labor.

Regulating the economy solely by centralized planning perverts the basis of social bonds; regulating it solely by the law of the marketplace fails social justice, for “there are many human needs which cannot be satisfied by the market.”

Reasonable regulation of the marketplace and economic initiatives, in keeping with a just hierarchy of values and a view to the common good, is to be commended.

America Today: “Easily Duped and Way Off Course” but Getting There Anyway

Gavin McInnes, the Master, the Scottish-born, ex-Canadian, punk rock maestro, devoutly Catholic family man, the doctor of post-hipster analysis of the American condition, has written an excellent opinion piece in Taki’s Mag about the Trump phenomenon and some of the signs of why it’s a good thing in the crazy, screwed up, cultural hash that America has become.

McInnes’ insight is that you have to look at the “crybaby generation’s” take on things, because they determine the outcome of elections, like it or not. People like the idiots who write for Rolling Stone magazine, for example. “The crybaby generation is driving this boat and they don’t know how to drive. This is what’s so great about Trump. In an era where dupes are easily led, you need a great leader.”

And by “great leader,” McInnes is talking about a leader who doesn’t put up with the whining classes’ bullsh*t. That’s Trump all over. The magic of this is that after years of conservative leaders being too timid to stand up to the spoiled babies on the left, and getting nowhere, Trump is exactly the “strong daddy figure” that the millenials and assorted lefties really want, even if they won’t admit it. Read the article, and you’ll see examples of how the hip, young pundits are writing about Trump with the thinly-disguised admiration of trust-fund brats who are finally ready to go to work for Daddy’s business. McInnes explains this in the politically-incoherent way that only he can:

The Democrats, the mainstream media, neocons, liberals, and college kids are all part of the same hive. They want to fight but they don’t want to win. They’re like that crazy Latina girlfriend in a screaming panic who won’t shut up until you grab her by the wrists and say, “Shut the f*&k up. I got this.” We need to throw her onto the couch, grab a beer, and get back to work. That’s ultimately what she wants too. She just doesn’t realize it yet.

And the best part? “I still believe Trump is a snowplow who is paving the way for Ted Cruz. At the last second, he endorses Cruz and we get all the bravado of the former with the brains of the latter.” I concur. Fingers crossed. Cross-Posted and Bowdlerized from Blog of Monte Cristo.

I received this today from a retired, career military officer in my network:

I have sent emails and made phone calls. The soldiers I talk to confirm that this has been going on for years, and this administration supports it. We’re losing good soldiers and officers because we have an administration that allows this crap. I’m hoping that you and your network can draw enough attention that someone actually starts questioning this.