Watching the Signs: Desecration and the Shemitah

I believe it is URGENTLY important that you listen to this teaching by Rabbi Cahn.

After you listen closely to what Rabbi Cahn said, look again at this graphic that I posted earlier this month. A lot of folks saw a rainbow shooting out of the World Trade Center tower on 9/10 as a happy sign. I saw something entirely different, one which I will not belabor because I’m a lady. However, given that Isaiah 9/10 is where the harbingers are listed in the Bible and that God covered Manhattan with ominous DARK CLOUDS on 9/11, I think my interpretation is the correct one.

The Blessed Mother’s messages at Medjugorje say the same things Rabbi Cahn and Sid Roth say at the end of the video! See archives @ http://www.medjugorje.hr/en/medjugorje-phenomenon/our-ladys-messages/

Comments Off on Watching the Signs: Desecration and the Shemitah

Below is a list of the official Vatican media sites where you can check the veracity of any story about or statement attributed to Pope Francis that you see circulating the internet:

Comments Off on The Real Pope Francis

Let there be no misunderstanding or misconception. (I’d include misconstrues ion, but I’m not sure how to spell it.)
Islam is a filthy religion based on intolerance and violence. It is the only religion that justifies killing anyone who will not conform to their barbaric practices.
It is the “religion of peace” that:
Throws homosexuals off the roof of a tall building while a crowd of madmen cheer
Stone a girl if she is raped
Families are allowed to kill a female if she speaks to someone other than family in public
Arrange marriages between 9 year old girls and 30 year old perverts. If the girl resists, she is murdered… that family honor bullshit again
Christians who will not renounce their fate are beheaded or burned alive in front of cheering throngs of savages.

There was a big blowup Saturday when the first question to Donald Trump was from a democrat plant who referred to Obama as a Muslim and Trump didn’t leap to Jugears’ defense. Trump said it was not his job to defend the Kenyan.

TRUMP RESPONDS TO MEDIA HORDE: “Am I Morally Obligated to Defend President?… I Don’t Think So”

Kimberly Guilfoyle: The Obama-Basher at Trump Town Hall “Was a Plant” (VIDEO)

Obama could not foresee what was going to happen when he did what any liberal would do, cut and run from a fight and piss away all the sacrifices of Americans far braver than anyone of his ilk. He’s just not that smart. ISIS started shortly after he announced he was bugging out and has spread like a deadly plague. He has no guts, but he IS opportunistic. When cowardly muslim assholes and terrorists mixed amongst them started flooding Europe to spread the disease of their filth throughout the civilized world.

Muslims March Through Streets of Denmark – Demanding a Caliphate

Hundreds, if not thousands, of protesters took part in the march.
http://www.thegatewaypundit.com/2015/09/muslims-march-through-streets-of-denmark-demanding-a-caliphate-video/

A tax-financed luxury living with free housing, sky high welfare benefits and their own “blonde beauty” as a girlfriend. These are some of the promises that immigrants from the Arab world currently are receiving to make a pilgrimage to Sweden, according to a investigative report in Dala-Demokraten.

Right now, over a thousand immigrants a day, most of whom are men, are seeking asylum in Sweden.
http://www.thegatewaypundit.com/2015/09/muslim-migrants-promised-free-housing-and-blonde-women-if-they-make-it-to-sweden/

Muslims in Germany Demand End to “Un-Islamic” Oktoberfest
Muslims initiated a petition on Change.org urging the City of Munich to end Un-Islamic Oktoberfest.

The annual event includes alcohol and nudity which Muslims believe are un-Islamic.

A group of Algerian Muslims attacked a pregnant woman and her Christian husband in Germany. The Muslims swore at the Christian man and then attacked him with a broken bottle.
http://www.thegatewaypundit.com/2015/09/muslims-beat-8-months-pregnant-woman-and-christian-husband-in-germany/

IN FRANCE, JEWS MAKE UP 1% OF THE POPULATION BUT SUFFER 58% OF THE HATE CRIMES AT THE HANDS OF MUSLIMS

Before Muslims Oslo was virtually a rape-free city

DON’T DOUBT HE ENVISIONS THIS PLAGUE COMING HERE….HE CAN’T WAIT
Along with the criminals from Mexico he sees an opportunity to bring hundreds of thousands more of these smelly goatherders here to suck on the federal teat and spread their cancer throughout the nation.
Children are not allowed to pray or pledge allegiance to the flag but they are forced to recite from the Koran, dress in hijabs, and write about how great Allah is.
Muslims are allowed to cover their faces when they have their drivers licence photos taken and have someone else handle alcohol and pork products after they gain employment where everyone else is obligated to do it.
His lasting revenge will be infecting the country with the pernicious virus of Islam and a legacy of judicial activism from which America will probably never recover.

Obama’s ring: ‘There is no god but Allah’

Now, newly published photographs of Obama from the 1980s show that the ring Obama wore on his wedding-ring finger as an unmarried student is the same ring Michelle Robinson put on his finger at the couple’s wedding ceremony in 1992.

Moreover, according to Arabic-language and Islamic experts, the ring Obama has been wearing for more than 30 years is adorned with the first part of the Islamic declaration of faith, the Shahada: “There is no god except Allah.”

Obama Admits He Is A Muslim

I Forget; Who Was Supposed to Be POTUS During These ATROCITIES on US Military Bases in Afghanistan?

Well, let’s see, this New York Times article mentions the height of child rape on US bases in Afghanistan being between 2010 and 2012. That makes it that guy whose tenure also includes the most suicides by deployed US military personnel in HISTORY. I wonder why? And it seems to me one of the women running for President right now was US Secretary of State at the time these atrocities were being labeled “cultural things” that we had to accept in our allies.

This is what Barack has done to us in his shadow crusade to build an Islam-friendly America. I just went outside and yanked the Stars and Stripes down off my front porch flagpole and put the yellow Gadsden (Revolutionary War) flag back up. If anybody asks me why, Imma tell them to go talk to this guy. 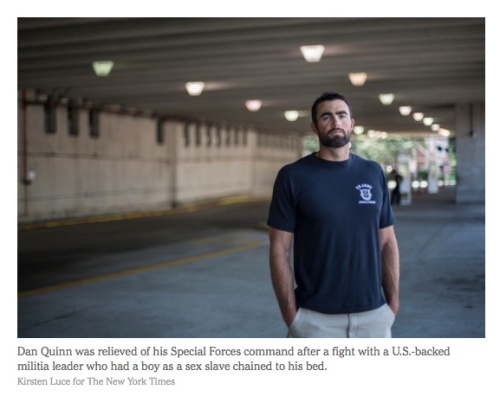 But I encourage everyone to read this entire article in the NY Times – not something I do very often.

Meantime, I fully endorse this message to Mr. Obama from Sean Whalen, which I just shamelessly stole from the Feral Irishman.

Yesterday and today, I came across some really excellent stuff that I think shows pretty clearly that, while Ahmed Mohammed did not make a bomb, he also did not make a clock.

The object in question was merely the guts of a 1980’s vintage Radio Shack digital alarm clock that had been pulled out of its case and stuffed into a suspicious looking container.

Listen closely to the video below. I am no fan of Bill Maher, but on this, ITA with him. I even agreed with Chris Matthews!

Maher’s panelists include Jorge Ramos, Chris Matthews, Mark Cuban and former Gov. George Pataki. The only one to keep mouthing the “racism” and “Islamophobia” line was Ramos, who you might remember was the jerk who bullied his way into a Trump presser to yammer about immigration. It’s one of those “Liberal Logic 101” things that Ramos himself sees nothing but skin color. Project much, Jorge?

I was particularly interested in what Mark Cuban had to say, which was that the boy was excited and engaged when they spoke about science, but that when the topic was his alleged clock project, the boy was either mum or being coached by a relative.

This kid is a science geek.

If he had actually made a clock from scratch or even assembled one from a kit, he would’ve been excited about it and been running off at the mouth to his teachers and anyone else who would listen.

Personally, I think this young man was used as a pawn by his father, who Mark Steyn describes as “a belligerent Muslim activist and perennial Sudanese presidential candidate whose brother runs a trucking company amusingly called Twin Towers Transportation.”

I think the father or someone else jury rigged the device and made the boy take it to school, instructing him to show it around until someone got upset enough to make a stink that the Muslim community could use to further their cause.

Specifically, they want people self-censoring for fear of appearing racist so that their terrorist operatives can move about, recruit and bomb as freely as possible.

Irvine, Texas, is only 25 miles from Garland, Texas, where the Mohammed Drawing Contest was attacked by two armed ISIS sympathizers. Of course the school was cautious. But you know what … they were not freaking out! They gave the kid many opportunities to talk about his alleged project. He wouldn’t. So yeah … they called the cops.

My little collection of fave Donald funnies has hit critical mass, so I’m going to dump them on ya today. You’re welcome! 🙂 Stay tuned for extra texty goodness below by Stilton Jarlsberg and Mark Steyn!

Sept 21, 2015: Stilton Jarlsberg posted the text below with this toon @ http://hopenchangecartoons.blogspot.com/2015/09/alarm-akbar.html 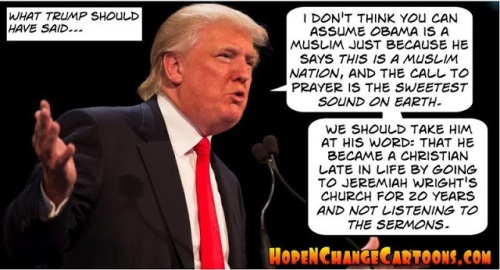 One of the dumbest political stories to get traction in recent days (and trust us, that’s a pretty high bar to clear) relates to a townhall meeting in which an audience member referred to Barack Hussein Obama as a Muslim and – horror of horrors! – Donald Trump didn’t immediately declare that Barry is actually a Christian and, in all likelihood, the Second Coming.

Granted, Obama is widely known for his declarations that when times get tough he’ll “stand with Islam,” that “the future must not belong to those who slander the prophet of Islam,” that ISIS (“Islamic State”) is not Islamic, and that Christians in flyover country are bitter little people who “cling to guns and religion.”

But he also says that he’s a Christian (albeit one who avoids church like the plague, seems awfully vague on Scripture, and has been instrumental in ramping up government harrassment of Christians) – so where does the truth lie? And why is it Donald Trump’s job to figure out whether to believe Obama’s words or his actions (you can’t do both) and explain it to everyone else?

The always-brilliant Mark Steyn has a lot to say on the subject and you should definitely follow the link to his piece [http://www.steynonline.com/7188/get-lost-you-palace-guard-creep]. Even though we at Hope n’ Change aren’t religious, when Steyn brings down Hell and damnation on the hypocrites pushing this story, he makes us believe.

“Why does one Republican candidate’s “scandal” get hung around the neck of every other guy’s? I’ll answer your question to me about Donald Trump’s ‘gaffe’ after you ask Bernie Sanders, Martin O’Malley, Lincoln Chafee and Joe Biden about Hillary Clinton’s server and how she handled Benghazi. Till then, get lost.”

“And frankly, whatever the President’s personal faith, there is no dispute that his leadership of the western world has been an utter catastrophe for Christians around the planet. Some of the oldest Christian communities on earth have been entirely extinguished on Obama’s watch: in Mosul, Iraq, which was an American protectorate on the day he took office, not a single Christian remains. Every single one of them is dead or fled. So, instead of jumping through your preposterous hoops and speaking up for the most powerful man in the world, I would rather speak up for the powerless – for the Nigerian schoolgirls, for the Yazidi, for the Copts in Egypt, and for all the other beleaguered Christian communities in the world this feckless president has set alight and watched burn.”

Comments Off on Trump Toons