On September 19, 1846, the Blessed Mother appeared to two children in La Salette, France. She gave each of them a public message and a secret message. These messages were passed on to the pope.

The boy lived a sober life, but the girl, Melanie Calva, appears to have become quite the attention hog. Some years after the apparition, she wrote and published pages and pages of garbage she claimed was what Our Lady had told her.

Most of the prophetic parts of the authentic messages have come to pass.  As the Fourth Blood Moon approaches, I am particularly intrigued by this bit:

“Lastly, hell will reign on earth. It will be then that the Antichrist will be born of a Sister, but woe to her! Many will believe in him, because he will claim to have come from heaven, woe to those who will believe in him! That time is not far away, twice 50 years will not go by.”

“Lastly, hell will reign on earth.”

“It will be then that the Antichrist will be born.”

If Antichrist was born in August, 1945, he just had his 70th birthday.

It sucks to be Debbie

Sept 20, 2015: Democrats at the NH convention heckled Debbie about the lack of debates. See three videos tweeted from the audience @ http://allenwestrepublic.com/2015/09/19/nh-democrats-heckle-debbie-wasserman-shultz-and-its-awesome-nhdems2016/

“Telling New Hampshire they can only have one before New Hampshire, telling Iowa only one day before Iowa — that’s never happened before. And I think people find it insulting. It’s beneath us as a party.”

Martin, Martin … you do realize your party fully supports dismembering pain-capable human babies in the womb and murdering any of the little buggers who don’t come out dead as planned? How in Hell could ANYTHING be “beneath” you people?

As for insulting ::coughcough:: … methinks the quality of your candidates is what is really insulting, plus a darn good reason to limit public debates.  Maybe all y’all could consider propping some standees of the candidates up on a stage and have them take turns spouting pre-recorded Democrat talking points at regular intervals? 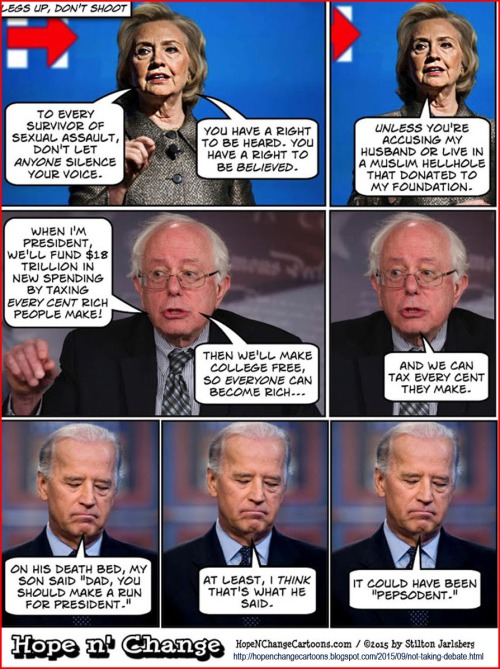