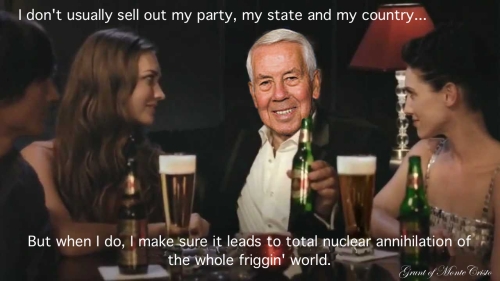 Today marks the day that President Obama achieved critical mass (heh) in getting his Iran Treaty bomb-proofed against its massive resistance in Congress. Outgoing Democrat Senator Barbara Mikulski announced her support, giving Obama the 34 Senate votes he needs to sustain any veto of the deal.

While she was announcing her support this morning, SecState John Kerry was in Philadelphia giving a technically unnecessary speech to reassure the public that the deal was actually a good thing. Sitting in attendance, and prominently mentioned by Kerry, was former US Senator Dick Lugar, who is one of the very few Republicans supporting the administration in this potentially catastrophic sham agreement.

I’ve met Lugar, a fellow Hoosier and Eagle Scout, back when he was mayor of Indianapolis, and I supported him for years, completely unaware that he would eventually travel to Russia in 2005 with a young Barack Obama, apparently lose his mind, and decide to throw his lot in with that treasonous sack of shit. Little did anybody know how complete that fresh allegiance would be for the Senator, who is now an object of nearly universal contempt among still-sane conservatives, and probably a future resident of the Ninth Circle of Hell, which is reserved for the treacherous. That’s appropriate, perhaps, given his tenure as mayor of the Circle City in Indiana. I really don’t have anything else to say about him, except “Bon voyage, Lugar.” What a dick.