I’m not the greedy one 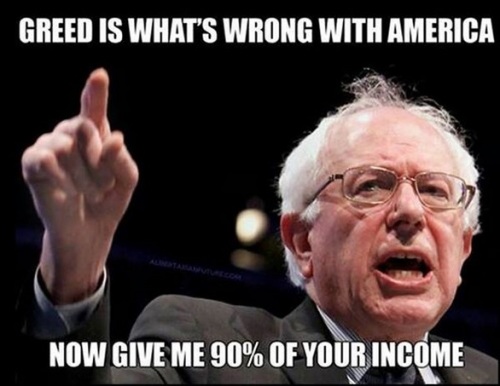 The word “greed” has become a BP-elevating trigger for me … ever since the summer of the Obamacare townhalls, when the deacon in my church wrote in the bulletin that those of us who opposed the bill were doing so out of greed.

The real truth is that most of us care deeply about things like equality and justice. We just differ in our beliefs about which public policies will best achieve these lofty goals.

My deacon’s arrogant and callous remark illustrates one of the other big differences I see between people like him on the Left and people like me on the Right, which is that they assume we disagree with them because we are callous scumbags, while we assume they disagree with us because they are uninformed about the anti-human outcomes of the policies they promote.

His remark also demonstrated an appalling lack of familiarity with Catholic teaching, which is summarized below and which IMHO firmly supports the policies and values of the Right, particularly of the Tea Party.

The Catechism of the Roman Catholic Church: Paragraph 2425

2425. The Church has rejected the totalitarian and atheistic ideologies associated in modem times with “communism” or “socialism.” She has likewise refused to accept, in the practice of “capitalism,” individualism and the absolute primacy of the law of the marketplace over human labor. [Cf. CA 10; 13; 44] Regulating the economy solely by centralized planning perverts the basis of social bonds; regulating it solely by the law of the marketplace fails social justice, for “there are many human needs which cannot be satisfied by the market.” [CA 34] Reasonable regulation of the marketplace and economic initiatives, in keeping with a just hierarchy of values and a view to the common good, is to be commended.

One response to “I’m not the greedy one”