HOW TO GIVE YOUR CAT A PILL:

1) Pick cat up and cradle it in the crook of your left arm as if holding a baby. Position right forefinger and thumb on either side of cat’s mouth and gently apply pressure to cheeks while holding pill in right hand. As cat opens mouth, pop pill into mouth. Allow cat to close mouth and swallow.

2) Retrieve pill from floor and cat from behind sofa. Cradle cat in left arm and repeat process.

3) Retrieve cat from bedroom, and throw soggy pill away.

5) Retrieve pill from goldfish bowl and cat from top of wardrobe. Call spouse from garden.

7) Retrieve cat from curtain rail, get another pill from foil wrap. Make note to buy new ruler and repair curtains. Carefully sweep shattered figurines and vases from hearth and set to one side for gluing later.

8) Wrap cat in large towel and get spouse to lie on cat with head just visible from below armpit. Put pill inside end of drinking straw, force mouth open with pencil and blow down drinking straw.

9) Check label to make sure pill not harmful to humans, drink 1 beer to take taste away. Apply Band-Aid to spouse’s forearm and remove blood from carpet with cold water and soap.

11) Fetch screwdriver from garage and put cupboard door back on hinges. Drink beer. Fetch bottle of scotch. Pour shot, drink. apply cold compress to cheek and check records for date of last tetanus shot. Apply whiskey compress to cheek to disinfect. Toss back another shot. Throw Tee shirt away and fetch new one from bedroom.

12) Call fire brigade to retrieve the f—— cat from tree across the road. Apologize to neighbor who crashed into fence while swerving to avoid cat. Take last pill from foil-wrap.

13) Tie the little b**tard’s front paws to rear paws with garden twine and bind tightly to leg of dining table, find heavy duty pruning gloves from shed. Push pill into mouth followed by large piece of steak filet. Be rough about it. Hold head vertically and pour 2 pints of water down throat to wash pill down.

14) Consume remainder of Scotch. Get spouse to drive you to the emergency room, sit quietly while doctor stitches fingers and forearm and remove pill remnants from right eye. Call furniture shop on way home to order new table.

15) Arrange for RSPCA to collect “mutant cat from hell” and call local pet shop to see if they have any hamsters.

HOW TO GIVE A DOG A PILL:

HRC should be prosecuted

Comments Off on HRC should be prosecuted

LDS (Mormon) Church: “Abortion is one of the most revolting and sinful practices in this day.”

Liberal logic is an oxymoron

And their biggest moron is running our country. 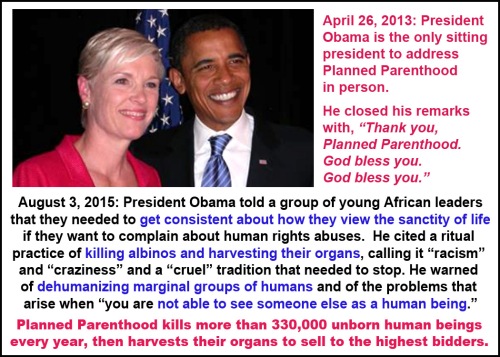 Comments Off on Liberal logic is an oxymoron

Germany had surrendered to the Allies in May, but the war in the Pacific raged on. Iwo Jima, Tarawa, Okinawa. The toll for taking those pieces of real estate was appalling. One cannot imagine what Harry S. Truman agonized over when he was given the alternative of using the atomic weapon we now possessed and kill hundreds of thousands in a matter of seconds or risk losing a million or more American lives fighting a fanatical enemy through an invasion of their homeland where self-sacrifice was a part of their culture. He gave the go-ahead. The die was cast. Hiroshima and Nagasaki became synonymous with total nuclear destruction. We have not had to unleash its power since. No country would think of challenging America’s strength. Through the weakness, treachery and sheer incompetence of our current commander-in-chief the future seems shaky.

War and Conflict. World War Two. pic: September 1945. A scene of devastation after the American Atom bomb attack on Hiroshima, Japan, which was dropped on 8th August 1945. Rolls Press/Popperfoto

IN MY LITTLE TOWN

While perusing Facebook last night I came across a page devoted to the photographic history of my town. Some of the things were way before my time, but there were a lot of memories. Here is the opening of a website about our town:

Knowing the history of the city lets you know its character, and the character of the people that make it up. The history of Rockford, Illinois is quite interesting. This mid-sized city in northern Illinois turned 150 years old in 2002. The city was founded in 1834 and called the “Village of Midway” initially. This is because it was located at the midway point between Chicago and Galena. This name stuck around until 1837 when it was officially changed to Rockford because of its location on the Rock River. This name was chosen because of the good “ford” on the Rock River. A ford is a naturally occurring low water area in a river, allowing people to walk or drive across without a bridge.

Rockford is located 70 miles northwest of Chicago, just south of the Wisconsin state line. It was at one time the machine tool capitol of the country. Camp Grant was an Army training facility located at the Rockford Airport, which was renamed the Rockford-O’Hare airport after UPS built a huge distribution center there. When the Concorde first flew, it landed here because O’Hare didn’t have a long enough runway for it to land.

As with most towns,the downtown was the heart of the city. There were 5 movie theaters, businesses and recreational facilities, like a bowling alley/pool hall and a roller skating rink where the family could go. We have a landmark movie theater named the Coronado, which I’ll post about at another time, given I don’t want to use up a lot of space.

We are not without our celebrities, like Perry Mason co-star Barbara Hale, Olympic skaterJanet Lynn, the Rockford Peaches baseball team, and our hometown heroes, Cheap Trick. I thought maybe somebody would enjoy something that wasn’t a political rant. You can get those anywhere. Bear with me, I’ll try to do some regular stuff after my Thursday breakfast meeting with my kin.

THESE ARE THE ROCKFORD PEACHES AT BEYER STADIUM,IN 1950. WE PLAYED OUR HIGH SCHOOL FOOTBALL GAMES ON THAT FIELD UNTIL THE CITY BUILT A STADIUM ON OUR SIDE OF TOWN IN THE LATE 70’S.

THIS IS WHERE I HAD MY FIRST HOURLY-PAYING JOB IN 1965. HAMBURGERS WERE 12 CENTS, CHEESEBURGERS 15, AND HAND-CUT FRENCH FRIES AND MILKSHAKES .20. STANDING OVER A FLAT IRON GRILL IN THE DEAD OF SUMMER WAS NO FUN, BUT IT DIDN’T KILL ME, SO IT MUST HAVE MADE ME STRONGER.

THEY WERE CALLED ROOT BEER STANDS BACK THEN. THIS ONE WAS BUILT NEAR HARLEM HIGH SCHOOL, HOME OF THE HARLEM HUSKIES. MY WIFE IS A HARLEM ALUM. SHE SAID SHE SPENT MANY A MUGGY SUMMER NIGHT HANGING OUT HERE, QUAFFING ROOT BEERS, FRIES AND GOSSIPING WITH HER GIRLFRIENDS. WE KNEW HOW TO HAVE FUN>

THIS WAS THE DRIVE-IN THEATER ON THE WEST EDGE OF TOWN. IT WAS WHERE WE ALWAYS WENT. WE POPPED CORN AT HOME, TOOK SODA IN A COOLER, AND DRESSED IN OUR PAJAMAS BECAUSE HALFWAY THROUGH THE FIRST FEATURE WE WERE ZONKED OUT IN THE BACK OF THE STATION WAGON. I EVEN HAD MY FIRST CAR DATE HERE. IT STOOD UNTIL THE 80’S WHEN A BAD WINDSTORM BLEW DOWN THE SCREEN. IT WAS NEVER REBUILT. IT NOW HAS SELF-STORAGE UNITS ON THE GROUNDS. 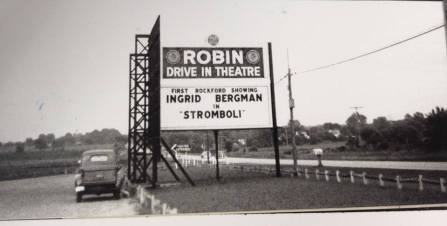 THIS HAD TO BE ABOUT 1974-75. DW WENT TO SCHOOL WITH THE DRUMMER,BUN E. CARLOS (BRAD CARLSON) AND RICK NEILSEN’S DAD RALPH OWNED THE BIGGEST MUSIC STORE IN TOWN. BY THE TIME HE FINISHED HIGH SCHOOL, RICK COULD PLAY MORE THAN 20 INSTRUMENTS AND WAS ALREADY DESIGNING HIS OWN GUITARS, AS HE STILL DOES. I HAD A MUSIC THEORY CLASS WITH HIM AT OUR COMMUNITY COLLEGE. I WORKED MY BUTT OFF FOR A ‘C.’ HE SHOWED UP FOR ABOUT TWO CLASSES AND ACED IT. GO FIGURE. CAN YOU IMAGINE SEEING ALL THESE BANDS FOR TWELVE BUCKS?

THESE WERE SOLDIERS TRAINING FOR WAR AT CAMP GRANT

THERE WAS AN AMUSEMENT PARK CALLED KIDDIELAND. EVERY TIME A KID WENT BY IT THE WHINING WOULD START. I THINK WE WENT TWICE OUR WHOLE ADOLESCENT LIVES. IT HAD A TRAIN, A ROLLER COASTER CALLED ‘THE LITTLE DIPPER’, A PONY RING AND BOATS THAT WENT AROUND IN A RING OF WATER. IT WAS MAGICAL.

EVERY CHANCE I GOT I HEADED FOR THE RECORD STORE TO BUY THE LATEST 45s FOR 1.49. IN THE PICTURE YOU CAN SEE THE PALACE SHOE REPAIR. OUR FIRST DRUMMER WAS THE NEPHEW OF THE OWNER. HE WORKED SATURDAYS SHINING SHOES. THE GUITAR PLAYER,BASS PLAYER AND I WOULD GO IN AND MAKE HIM SHINE OUR SHOES FOR FIFTY CENTS. HE GOT EVEN BY STOPPING PLAYING IN THE MIDDLE OF A SONG. IT WAS WORTH IT.

I WAS THERE! JULY 27TH,1980. JUST ME AND ABOUT30,000 OTHER PEOPLE AT THE ROCKFORD SPEEDWAY. THIS WAS BEFORE ANN WILSON BLEW UP TO 200 POUNDS. IT WAS ONE OF THE BEST CONCERTS I EVER SAW

Comments Off on IN MY LITTLE TOWN

They have a point…

The Israeli National News pointed out this morning that in his speech yesterday at the American University in Washington, “Obama told U.S. Jewish leaders it was likely rockets would fall on Tel Aviv if the nuclear deal was blocked and military action ensued.” Statements like this amount to dangerous verbal hostage-taking as Congress considers the Administration’s Iran deal. Saying outright that rockets would fly if Congress fails to do what he wants is nothing more than a threat, and Israeli writers like former New Yorker Batya Medad see that for what it is. In her words and the words of the INN editors, Obama was “justifying” Iranian hostilities before the fact, and giving them a clear “green light.” She adds: “… it’s very clear that the Obama government trusts and likes Iran and its leaders a lot more than it likes Israel and Prime Minister Netanyahu.” Indeed.

Meanwhile, as John Kerry decides whether he thinks Iran is serious about annihilating Israel, Israel diplomatic channels were busy this morning informing the US Congress about satellite photos indicating that Iran is sanitizing the suspected nuclear military site at Parchin, in broad daylight, even as the accord was being signed days ago.