“These are not ‘baby parts’. Whether a woman has a miscarriage or an abortion, the tissue specimen is called ‘products of conception’. In utero, i.e. during pregnancy, we use the term ’embryo’ from fertilization to 10 weeks gestation and ‘fetus’ from 10 weeks to birth. The term baby is medically incorrect as it doesn’t apply until birth. Calling the tissue ‘baby parts’ is a calculated attempt to anthropomorphize an embryo or fetus. It is a false image—a 10-12 week fetus looks nothing like a term baby—and is medically incorrect.”

Methinks the real truth here is that calling unborn humans “products of conception” and “fetuses” is a calculated attempt to de-humanize them for the sole purpose of making it less repugnant to murder them. A 10-12 week fetus may not look like a “term baby” but it is very clearly human. 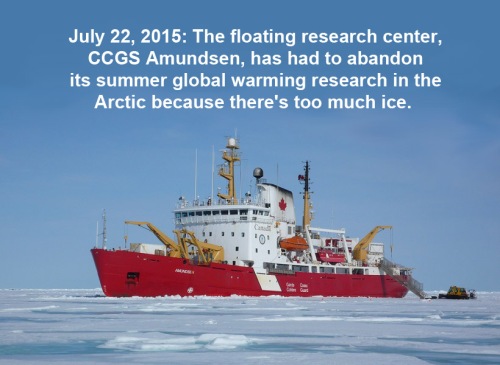 While the original news story carefully avoided saying what the Amundsen’s research topic was, Jay T. Cullen, Associate Professor of Earth and Ocean Sciences at the University of Victoria in British Columbia, helpfully tweeted:

“From July 10 to August 20 I will be aboard the CCGS Amundsen working with a group of scientists to better understand how climate change in the Arctic is affecting important physical, biological and chemical processes and conditions in the marine environment.”

I was curious if he was a global warmist. I found this at his college bio: “We aim to understand the chemical speciation and fate of trace elements in the marine environment and how natural and anthropogenic environmental perturbations affect trace element biogeochemical cycles and vice versa.”

A spokesman for the Canadian Coast Guard said Tuesday that ice conditions are the worst he’s seen in 20 years. Those watching the SUN, instead of greenhouse gasses, are not surprised. We are heading into a new Grand Solar Minimum, which means a Little Ice Age is starting.

This fits with my belief that we are entering into the End Times, during which we can expect a sharp rise in violence, plagues and famines … all of which were features of the last Maunder Minimum.

NBC’s Chuck Todd: “I think they [Clinton campaign] blew it when they didn’t turn over the server immediately. … I don’t know if there’s anything they could do now to get out in front of it.”

Hot Air’s Ed Morrissey: “We can assume that transparency would have done her even more political damage than their decision not to turn over the server — or disclose the fact of its existence until it was discovered independently. In that case, Hillary didn’t blow it by keeping the server secret — and the bet was always that nothing would be found. That’s why Hillary and her team wiped the server clean and still won’t turn it over.” 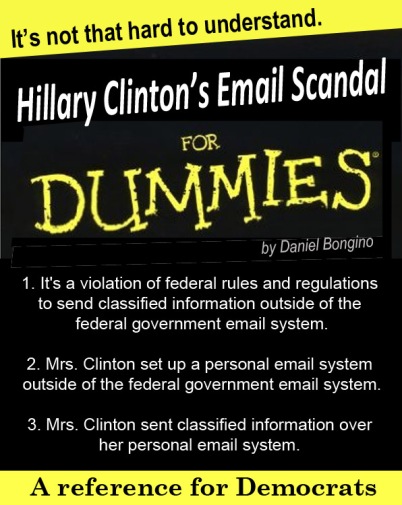 If you think the video above is a bunch of extremist conspiracy theory hooey, consider the following …

EXCERPT: “Consider the inscription over the clinic at the Hitler Youth center at Halle: ‘The Faith fanatics, who still to-day slide down on their knees with faces uplifted to heaven, waste their time in churchgoing and prayers, and have not yet understood that they are living on the earth and that therefore their task is of a thoroughly earthly kind. All we Hitler people can still only look with the greatest contempt on those young people who still run to their silly Evangelical or Catholic Churches in order to vent their quite superstitious religious feelings’.” [Page 54]

This is long, but a talking head, so you can just listen. Please DO LISTEN.

Song 2 is even creepier than Song 1, because it’s sung to the tune of The Battle Hymn of the Republic. Compare what words these very young children were taught to sing instead of the traditional, biblical, Civil War era lyrics that I’ve printed below.

ORIGINAL LYRICS: The Battle Hymn of the Republic

The images are based on the account of Jesus’ victory in the final battle at Armageddon from the Book of Revelation.

Mine eyes have seen the glory of the coming of the Lord;
He is trampling out the vintage where the grapes of wrath are stored;
He hath loosed the fateful lightning of His terrible swift sword:
His truth is marching on.

I have seen Him in the watch-fires of a hundred circling camps,
They have builded Him an altar in the evening dews and damps;
I can read His righteous sentence by the dim and flaring lamps:
His day is marching on.

I have read a fiery gospel writ in burnished rows of steel:
“As ye deal with my contemners, so with you my grace shall deal”;
Let the Hero, born of woman, crush the serpent with his heel,
Since God is marching on.

He has sounded forth the trumpet that shall never call retreat;
He is sifting out the hearts of men before His judgment-seat;
Oh, be swift, my soul, to answer Him! Be jubilant, my feet!
Our God is marching on.

In the beauty of the lilies Christ was born across the sea,
With a glory in His bosom that transfigures you and me.
As He died to make men holy, let us die to make men free,*
While God is marching on.

*This is often now sung as “let us live to make men free,”

A true knight in shining armor