If anybody had noticed one of last week’s postings you would know that I commented that every day brings a new reason to loathe this sorry piece of shit ruining the country. The day after I posted it, a puddle of fetid pig vomit killed five innocents before keeping his date with his pedophile prophet to bugger each other in hell. On that very day,the First Dickhead issued a statement wishing all goat f*ckers a happy day.
Statement by the President on the Occasion of Eid-ul-Fitr
https://www.whitehouse.gov/the-press-office/2015/07/16/statement-president-occasion-eid-ul-fitr

(If you don’t read that shit…I don’t blame you. I didn’t either.)

Then he took the occasion to go before the cameras and feign sympathy for the military people he holds in utter contempt.

His statement interrupted an episode of Judge Judy. Thank goodness for cable.

In his continuing effort to rub as much salt in the wounds he’s opened, he then jetted off to New York for a little R&R , taking in a show, having dinner hanging with his tax exemptions and, of course, doing a fundraiser.

After Marines Slaughtered By Islamic Terrorist, Obama Jets Off To Broadway Show, Fundraiser
The White House has not released further details about the trip, but the New York Post reports he plans to attend a matinee showing of the Broadway show “Hamilton” on Saturday before returning to Washington.

Obama will also attend a DNC fundraiser tonight, which is typical behavior after major national tragedies. Less than 24-hours after the 9/11 Benghazi attacks, he jetted off to Las Vegas for a fundraiser. After American journalist James Foley was beheaded by ISIS, he hit the golf course.
http://townhall.com/tipsheet/katiepavlich/2015/07/17/after-marines-slaughtered-by-islamic-terrorist-obama-jets-off-to-broadway-show-n2026847

Standing O for the Obamas! The President and his girls steal the show on Broadway as the audience clap them in – bringing the curtain down on a whirlwind New York bonding trip

President Obama and his daughters arrived in the Big Apple on Friday for a rare father-daughter weekend
They walked into the Richard Rodgers theater on Saturday with the crowd around them on their feet
Excited audience members took their phones out while the smiling president gave a wave
Then, wearing his reading glasses, he sat down and watched the three-hour hip hop musical, Hamilton
It is a rare trip Malia, 17, and Sasha, 14, have enjoyed alone with their father — who was obviously keen to impress

THESE KIDS ALWAYS LOOK SO BORED

Obama Has Not Ordered Flag Flown at Half-Staff for Servicemen Killed in Chattanooga Terror Attack
President Barack Obama still has not ordered the lowering of the U.S. flag to half-staff at the White House and federal properties as a sign of respect and mourning for those killed, even though he (and former President George W. Bush) did so for previous mass killings by lone gunmen.

THIS PRICK EVEN ORDERED THE FLAG TO HALF-STAFF WHEN WHITNEY HOUSTON OVERDOSED ON HEROIN.
WARRIORS? NOT SO MUCH
In contrast it was only a matter of hours after the Supreme Court legalized same-sex marriage last month before Obama bathed the White House in the rainbow hues of the LGBTQ movement

The Pentagon said the day after the attack it would continue to leave recruiters unarmed and unprotected, and ordered Marine recruiters to not wear their uniforms to work.
http://www.thegatewaypundit.com/2015/07/obama-has-not-ordered-flag-flown-at-half-staff-for-servicemen-killed-in-chattanooga-terror-attack/

The president currently has staff members working on collecting data on health, credit cards, mortgages, school discipline, employment and neighborhoods to prove there are inequalities between white people and minorities, author Paul Sperry said in an article published on Saturday.

Count on a flood of private lawsuits to piggyback federal discrimination claims, as civil-rights lawyers use the new federal discipline data in their legal strategies against the supposedly racist US school system.

Even if no one has complained about discrimination, even if there is no other evidence of racism, the numbers themselves will “prove” that things are unfair.

AND TODAY’S OUTRAGE IS:
Obama Restores Diplomatic Relations With Castro’s Dictatorship
Barack Obama restored diplomatic relations today with the Castro dictatorship.
The Cuban Embassy in Washington DC opened its doors today during a ceremony at 10:30 AM.

Of course, Obama gave Cuba many concessions and gained not “one iota” from the Castro regime in return.
Capital Hill Cubans reported, via The Real Cuba:

“
The terms and conditions for today’s opening of U.S. and Cuban Embassies, in Havana and Washington, D.C., represent a tragic failure by the Obama Administration in diplomacy, the rule of law, democratic solidarity and U.S. regional interests.

HEY,BARRY:YOU AND YOUR HOMIES CAN KISS MY ENTIRE ASS

WHEN THEY EAT THEIR OWN

Netroots is a gathering of the most vicious of the leftists. Martin O’Malley was the mayor of Baltimore and the governor of Maryland and is now posing a a bit player in the democrat faux-primary. When he made the comment that ‘black lives matter…white lives matter…ALL lives matter,’ the great apes could bear no more and rushed the stage. They made him pay for the audacity of saying anybody except blacks’ lives are worth spit.

It’s been bad for a long time, but it seems to me that since Obama ascended his throne the Mau Mau have felt more and more emboldened in their efforts to get even with the white race they’ve been preached to as being the root cause of all their problems.

You would think all these people work two jobs rather than take a handout. That they graduate from high school and wait until they’re married to have children. That it is 90 times more likely for a black to be a victim of white crime and that the abortion rate among blue-eyed blonde women is over 70%. That they are among the top 20% of income tax payers and they are constantly mocked and vilified for their Christian faith.

SUCH WARM,GENTLE CREATURES. AREN’T THEY JUST THE CUTEST? WHY ARE SO MANY PEOPLE ON FOOD STAMPS SO DAMN FAT?

O’Malley was eventually booed off stage after saying “all lives matter.” Because, according to the mob, all lives do not matter!

The activists told the leftist crowd:

They booed the former governor throughout his speech!

If you recall, that talentless thug Kanye West, scotch bottle in hand, rushed the stage at the American Music Awards a few years ago and grabbed the microphone from Taylor Swift, the blonde white girl, who had just received an award and proceeded to screech that Beyonce should have won. Then he went home and banged Kim Kardashian.

O’Malley apologizes for telling protesters ‘all lives matter’
DID SHE LAMINATE SOME DOG TURDS AND USE THEM FOR EARRINGS? BET IT WAS A PIT BULL. 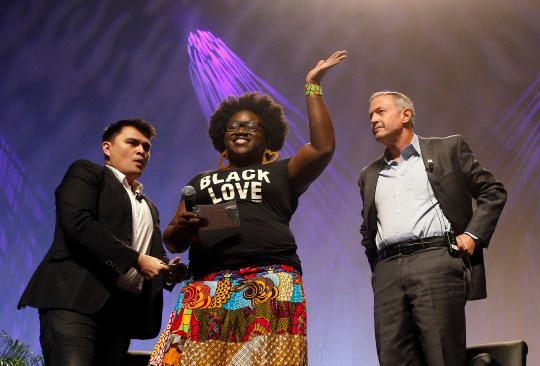 “That was a mistake on my part, and I meant no disrespect,” O’Malley said in an online interview after the event. “I did not mean to be insensitive in any way or communicate that I did not understand the tremendous passion, commitment and feeling and depth of feeling that all of us should be attaching to this issue.”

I’LL BET IT WOULD BE DEMEANING TO HAVE TO KOWTOW TO THESE URBAN PARASITES IF THEY HAD ANY CONSCIENCE OR PRINCIPLES. BUT THEN THEY WOULDN’T BE DEMOCRATS, WOULD THEY?
Butler added, “Claiming that ‘all lives matter’ does not immediately mark or enable black lives, only because they have not been fully recognized as having lives that matter.”

Can Hillary Clinton Really Get Away With Skipping Netroots?

“The Democratic front-runner was booed at this liberal gathering in 2007. And this year, a no-show has the base equally unimpressed.
Major unforced error. Showing up is important,” said Adam Green, cofounder of the Progressive Change Campaign Committee, which three years ago raised more than $1 million to help Warren win a Republican-held Senate seat in Massachusetts. “It’s important that people address those whom they expect a lot from. So, it’s unfortunate.”

THEY’LL HUFF AND PUFF, BUT IN THE END THEY’LL ALL VOTE FOR HER… EVERY LAST ONE OF THEM. SHE KNOWS IT, THEY KNOW IT. THAT’S JUST HOW SHE ROLLS.
http://www.nationaljournal.com/2016-elections/can-hillary-clinton-really-get-away-with-skipping-netroots-20150717

Comments Off on WHEN THEY EAT THEIR OWN

Donald Trump may be a clown, but I am inclined to think he has a point about John McCain. McCain has campaigned on his “war hero” military record for his entire political career, but the facts about his time in the Navy suggest he has more in common with Ted Kennedy than he ever did with any genuine war hero.

When he was graduated from the Naval Academy in 1958, McCain’s class rank was 894 … out of 899. Five from the BOTTOM. In less than three years, he was written up more than two dozen times on charges of drunk-and-disorderly, fraternization, disobeying orders, and insubordination. Yet, somehow … let me think why … he was stationed at a Navy champagne unit and promoted ahead of all but two of his 898 other classmates.

During his training years, he managed to crash three U.S. Navy jets out of sheer incompetence. In today’s military, one such lapse would end a pilot’s career. Standards may have been a bit looser in the 1960s, but it beggars belief that McCain kept flying after THREE crashes for any reason other than family connections.

McCain claimed in his autobiography that the first crash was due to engine failure. But the Naval Aviation Safety Center found no evidence of engine failure. Their conclusion was that he had used “a power setting too low to maintain level flight in a turn.” In other words, the plane crashed because of pilot error. Yet they let him continue flying.

His second crash happened while he was clowning around, flew too low and took out some power lines, causing a blackout. Again, his own fault … yet he was not grounded. In fact, he was allowed to fly solo in a Navy training jet to see the Army-Navy football game in Philadelphia; on the way home, he crashed for the third time.

Shortly thereafter, he was promoted to squadron commander of the air field named after his own grandfather!

In 1967, he was shot down during his 23rd mission over North Vietnam and spent the rest of the war as a POW. For his approximately 20 hours worth of missions over enemy territory, he was awarded 28 medals. Twenty-eight!

Methinks The Donald is right. John McCain is about as much of a military hero as Ted Kennedy was a champion of women.

“9/03/08 McCain has never really earned anything.”  If you google that phrase, you’ll see multiple hits for an article that was allegedly written in 2008 by an active, but unnamed Marine.

His fellow POWs say that the North Vietnamese called McCain “Songbird” because he was so helpful to their war effort.

As far as I’m concerned, the possibility that the Democrats have the goods on “Songbird” 100% explains why Senator John McCain is the #1 RINO who rolls over and votes the Democrat agenda every time his vote really matters to them. I think this also explains why the Left Stream Media supported him during the 2008 GOP primary race, then turned on him as soon as he was the GOP candidate. I think it even explains why he picked Sarah Palin, then cooperated with the Left in demonizing and sabotaging her while simultaneously running the weakest presidential campaign I’ve ever seen.

John McCain Exposed By Vietnam Vets And POW’s As a Liar And A Fraud
http://truthuncensored.net/john-mccain-exposed-by-vietnam-vets-and-pows-as-a-liar-and-a-fraud-video/#sthash.wnfV48th.dpbs

Comments Off on John “Songbird” McCain: Traitor and Lying Scum