The man who made his fortune by founding PayPal and once said that he knew as much about rocket science as any engineer who worked for him, is facing fairly flat Champagne tonight at the celebration of his 44th birthday. His SpaceX Falcon 9 rocket exploded shortly after launch today, destroying over 5000 pounds of critical supplies needed by the International Space Station crews, including US astronaut Scott Kelly, who arrived recently. NASA was particularly hoping that this resupply trip would be successful, since the last SpaceX flight was also a failure, and a Russian resupply rocket failed months before that. The space station crew now faces a shortage of supplies by, roughly, October.

The following is an image captured from the NASA telescope video at about two and a half seconds into the flight, at the moment when an explosive plume of gas erupted from the vehicle’s upper stage.

END_OF_DOCUMENT_TOKEN_TO_BE_REPLACED

The end is coming

For years same-sex marriage advocates have knowingly lied and deceived the public. They first claimed that they simply wanted the right to ‘marry’ the person they love. And yet where same-sex marriage has been approved, a tiny percentage of gay people got married.

They claimed homosexuality was genetic, but now say ‘gender’ and ‘sexual identity’ is a choice.

They claimed the mantle of tolerance and diversity — and yet have betrayed those same principles in attacking anyone that disagrees. Speak up for marriage in any public place today and you will be shamed and shunned, or worse.

So what is really at stake?

For many in the LGBT movement, the marriage debate is merely a proxy for a much larger revolution underway. Their end goal is to destroy marriage altogether, including the family, religion, and any institution that proposes limits on human behavior, especially sexual behavior.

Comments Off on The end is coming

Woohoo!! MARRIED saints to be canonized!! 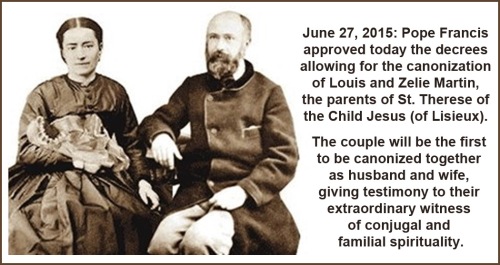 Cardinal Angelo Amato, the Prefect for the Congregation for the Causes of the Saints, emphasized their ‘exemplary life of faith, dedication to ideal values united to a constant realism, and persistent attention to the poor’.

Louis Martin (1823–1894) and Zelie Guerin (1831–1877) were blessed with nine children, four of whom died in infancy.  The remaining five girls all entered religious life, one of whom is St. Therese of Lisieux.