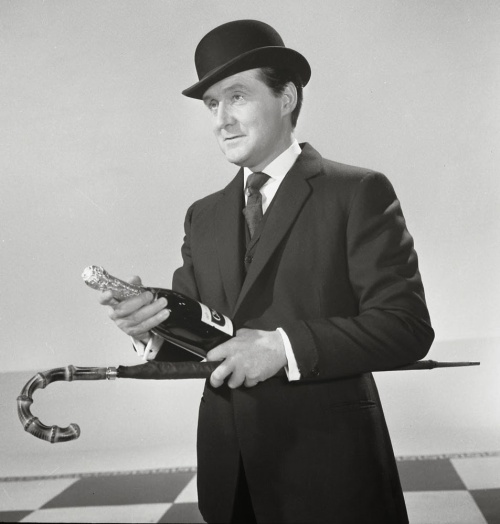 By some weird coincidence, we finally got around to buying Kingsman: The Secret Service last night on BlueRay and watched it. We’re always a little behind when it comes to movies. The film mainly has been compared to the James Bond franchise, even though the story has comic book roots. There is even a Bond reference or two in the dialog. But I couldn’t help thinking immediately that it had the flavor of the old British Avenger TV series with Patrick MacNee and Diana Rigg. The character played by Colin Firth, Harry Hart (Code Name: Galahad), reproduces the same dashing, fit and lethal character that MacNee created with John Steed.

And now it appears that just this morning Patrick MacNee has passed away at the respectable age of 93 at his home in California. Always admired and well liked in Hollywood, either in front of the camera or behind it or producing, he will be missed. He also has been a naturalized American citizen for the last 33 years. Sleep well and peacefully, Mr. MacNee.

WE NEVER HAD A CHANCE

Roberts Court Tortures Law to Save Obamacare…Again!
THE FIX WAS IN AND OBAMA KNEW IT THE WHOLE TIME.
JOHN ROBERTS IS AN ABSOLUTE DISGRACE.

On Thursday, the Supreme Court released its long-awaited decision on Obamacare’s IRS subsidies under federal health insurance exchanges. And, as expected, the Court rewrote the statute to help President Obama’s signature law.

With each passing day of Supreme Court decisions, conservative principles begin to feel more and more like the survivors of the Scream films: it’s only a matter of time before you are next for the knife.

But no matter: the law is whatever President Obama says it is, not those funny little words written down on those reams of paper nobody read before voting. Chief Justice Roberts, who has turned out to be yet another in a line of historically disastrous Republican Supreme Court picks (join your place in the pantheon, Justice Roberts, alongside Sandra Day O’Connor, David Souter, Anthony Kennedy, John Paul Stevens, and Earl Warren, for starters), saved Obamacare the first time by magically transforming a mandate to buy healthcare into a tax. Now he, along with Kennedy, have saved Obamacare a second time by rewriting it a second time. It must be convenient to be the President of the United States when you have a cheerleading Supreme Court on your hands willing to act as a superlegislature to clean up all the political mistakes you make.

The vote in favor of rewriting Obamacare to save it went 6-3. Purposeful textual misinterpretation isn’t even controversial at the Court at this point.

Has Supreme Court Justice John Roberts been blackmailed or intimidated?

I would put nothing by the Obama administration that lives and rules by the Chicago thug playbook.

Doubt me? On the same day that Justice Roberts and the Supremes upheld Obamacare – again – the key IRS watchdog reported to Congress that the IRS purposely destroyed evidence of a crime.

Republicans are being blackmailed, intimidated, extorted and bribed.

WHAT DO I GIVE A SHIT? NOBODY CAN FIRE ME, SO SHOVE IT UP YOUR ASS, AMERICA

NOTE: MY POSTINGS WILL BE VERY SPORADIC FOE AWHILE.I’M HAVING SEVERE BACK ISSUES WHICH MAKES IT PAINFUL TO SIT IN FRONT OF THIS MACHINE. I CAN ONLY GET RELIEF LYING ON MY BACK OR IN MY RECLINER WITH HOT/COLD PACKS. I CANNOT AFFORD TO SEEK MEDICAL ATTENTION UNTIL AUGUST WHEN I QUALIFY FOR MEDICARE SO YOU MAY NOT HEAR MUCH FROM ME FOR AWHILE.
CARRY ON.